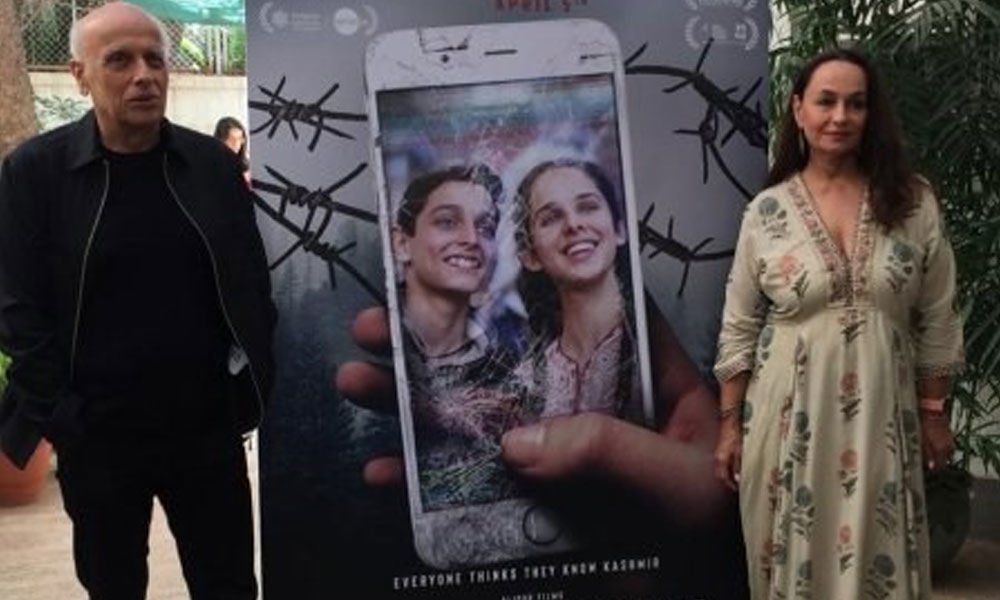 Filmmaker Mahesh Bhatt graced the trailer launch of wife Soni Razdan starring No Fathers In Kashmir here in Mumbai and hailed it as a staggering, heart wrenching film.

Filmmaker Mahesh Bhatt graced the trailer launch of wife Soni Razdan starring No Fathers In Kashmir here in Mumbai and hailed it as a staggering, heart wrenching film.

Mahesh Bhatt, Soni Razdan along with National Award winning filmmaker Ashvin Kumar were spotted at the trailer launch of No Fathers In Kashmir.

Noted for his sharpest and outspoken takes filmmaker Mahesh Bhatt said, "A staggering, heart wrenching film. Ashvin has the guts to embrace all that darkness and then having done that bring us so much 'light.' In these dark times of hate, here's a love story from the blood soaked valley of Kashmir which has the audacity to hope"

The film marks the acting debut of the filmmaker Ashvin Kumar along with other actors Anshuman Jha, Soni Razdan and Kulbhushan Kharbanda. Ashvin has also written and produced the film, along with executive Producer Varoon Vesuna.

Lead star of the film, Soni Razdan said, "I have a personal liking towards Kashmir because I'm a half Kashmiri. When I read this script and Ashvin first sent me the script I found it very interesting because here was a film that showed the reality. There have been many films on Kashmir but this one isn't peppered by drama, love stories and other things. It's what truly is representative of how the situation is in the valley. And that's what drew me to the film".

The film tells the tale of Noor and Majid played by newcomers Zara Webb and Shivam Raina respectively. The two are on a journey to find their respective fathers who have gone missing in the valley. The film raises several imperative questions, about compassion and empathy of those in the valley and its many realities.