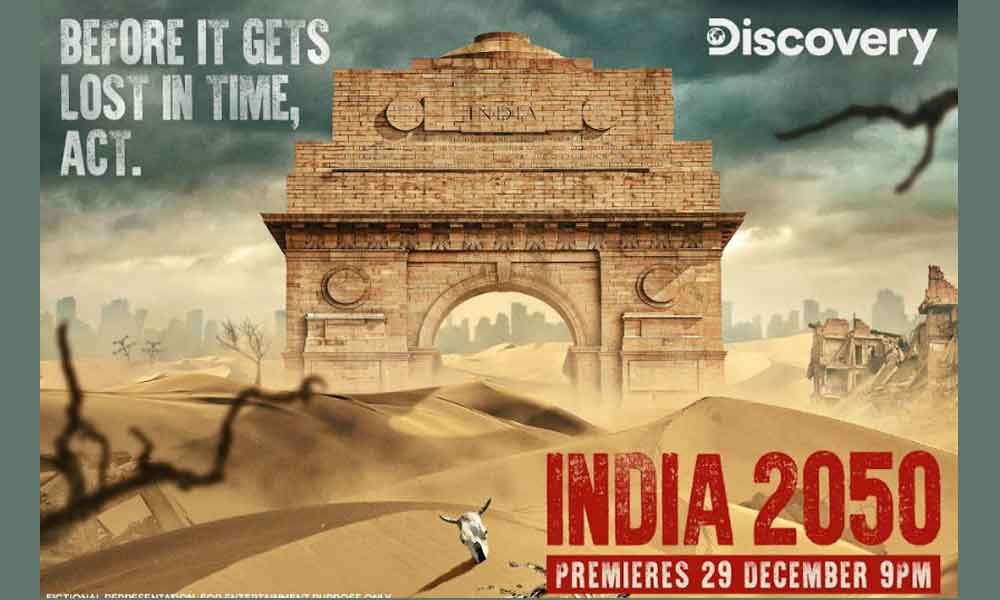 India is the fifth most vulnerable country to climate change as per a recent report*. This data is not surprising considering that India has 22 of the 30 most polluted cities in the world**.

What will happen if India were to continue walking down this path of environmental destruction? How will the thriving cities of India look then? Discovery channel presents a glimpse of the future if nothing is done about it right now with 'India 2050', a thought-provoking documentary, that premiers on December 29, 2019 at 9:00 pm.

The documentarybeginswith Jaipur,known as the Pink City of India, but imagined as in 2050, completely buried under piles of sand. It then moves into the future of currentlyflourishing metropolises of Delhi, Chennai, Mumbai and Kolkata, giving viewers a terrifying glimpse of what is to come, for each of these metro cities.

Highlighting the importance of the show,Sai Abishek, Director–Content, Factual & Lifestyle Entertainment – South Asia, Discovery, said, "India 2050 shines light on what could lie-ahead if we don't change. It is a wake-up call, urging each one of us to emerge from our collective slumber to act before it gets too late."

Highlighting industrial damage to the ecosystem in the show, Amitav Ghosh, author of Great Derangement, says, "We cannot in any way absolve companies and corporations of playing a role in this because we know now that there's been a huge systematic, well-funded climate denial machine! It was really the role of money, which has actually held up any kind of climate action for a very long time now." While, Environmentalist and Climate Change Expert Chandra Bhushan, warns, "We are going to leave our children a planet which is going to be much harsher than what we have today."

While presenting this alarmist view on the future, the film also highlights a larger crisis that humanity is likely to face - the crisis of environmental migration and climate refugees, the effects of which we are already facing in 2019 in certain patches in the Sundarbans and on India's east coast. Going forward, experts predict this to be the single most urgent crisis to be faced by every country in the world as sea levels will continue to rise and glaciers will continue to melt bringing about unprecedented and irrevocable changes to human life as we know it.

"We don't have time anymore. In the month of August 2019, within 12 days, India receivedmore than a thousand extreme and heavy rainfall events! You're getting to see the worst impacts of climate change and they're happening now!" says, Sunita Narain, Director General, Centre for Science and Environment, highlighting the need for immediate action. "People like us are protected. We believe… and it's our arrogance which has created the problem. Because we believe nothing can affect us! We will ramp up, we'll put on another air conditioner - the heat outside goes on. If there is no water, we'll buy bottled water. But we're not worried about a dying river - because we still get clean water in our taps," she further adds highlighting human apathy as one of the key reasons as to why we haven't been able to come together as a species to counter climate change in any way.

** According to a report released by IQ AirVisual and Greenpeace.

Swimming took away lives of two students in Krishna district

Coronavirus Crisis: Council Of Ministers To Meet Via...

Hyderabad constable fails to attend mother's funeral due to...