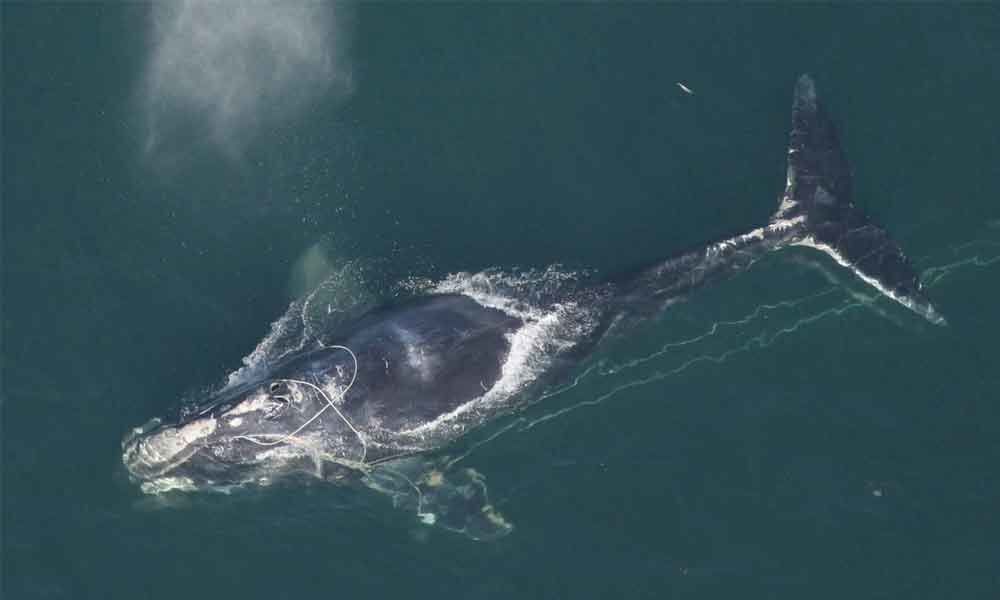 The US federal government is expected to release recommendations about protecting the vanishing North Atlantic right whales.

Washington: The amount of gear the East Coast lobster fishery puts in the water must be reduced in order to protect a dwindling species of large whale, a federal government team recommended Friday.

In this decade, the number of North Atlantic right whales has decreased by the dozens to about 411. The team issued its recommendations to the federal government on Friday that call for a reduction of vertical trap lines, which can ensnare whales, by up to 50 per cent in some areas. The team also recommended the use of lines that break more easily and allow the giant whales a chance to escape.

The recommendations must now go through an approval process that could be contentious. Lobster fishing groups closely monitored the team's discussions and said rule changes need to protect the fishing industry, too. Conservation groups have pushed for stricter new rules.

"I'm still trying to digest what this means for the Maine fishery," said Kristan Porter, president of the Maine Lobstermen's Association and a member of the take reduction team. "It's about figuring out what's next for the fishery."

The US lobster fishery, based mostly in Maine, is in the midst of a multi-year boom in catch, at a time when domestic and international interest in lobster is high, resulting in strong prices. Maine fishermen caught nearly 120 million pounds of lobster last year and have topped 100 million every year since 2011 after never doing so in the past.

Porter and others said it's too soon to speculate what reducing the lines could mean for the size of the haul. Lines can be used to retrieve multiple traps at once, so a 50 per cent reduction in lines doesn't necessarily mean an equal decrease in traps.

The recent growth of the lobster haul has coincided with several bad years for the right whales, which were decimated during the whaling era and are a perennial favourite on whale watch tours. There were about 480 right whales in 2010, and the population has suffered due to high mortality and poor reproduction. Not a single calf was sighted last year, though this year there have been at least seven.

The proposed rules represent "a substantial opportunity to reduce the impacts of US fisheries" on the animals, said Sam Rauch, NOAA Fisheries deputy assistant administrator for regulatory programmes. "Everyone understands that there are real and difficult consequences to fishermen as a result of the choices made in this room," Rauch said.

The take reduction team was created in the 1990s and includes scientists, fishermen, conservationists and others. Erica Fuller, a senior staff attorney with Conservation Law Foundation who is not on the team, described the moves as "a start," but added much work remains to save the whales.

"We need to do more and we need to do it faster than the rule-making proposed here," she said. Maine Lobstermen's Association executive director Patrice McCarron sent a letter to NOAA earlier in the week that stated the group is committed to "identifying conservation measures to improve protections for right whales."