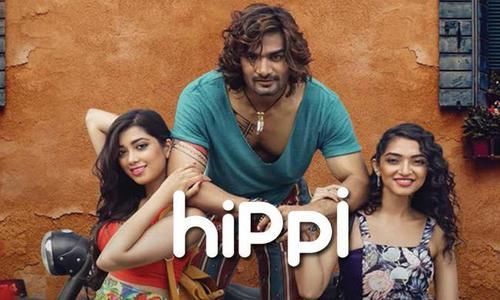 Karthikeya and Diganangana Suryavanshi played the lead roles in the film Hippi. This is the film that Karthikeya is coming up, right after the film RX100. There are expectations on this film in Youth. The makers are all excited about the response from the audiences. Directed by TN Krishna, the film is produced by Kalaipuli S Thanu under V Creations banner. The review of the film is here.

Dev (Karthikeya) is already in love with Sneha (Jazba Singh) but one day he meets Sneha's friend Amuktamalyada (Digangana Suryavanshi) and he tries to win the heart of Amuktamalyada. After some incidents, Amuktamalyada also falls for Dev but keeps a condition that he should do whatever she says.

Dev also accepts the condition and the duo start their relationship. But after few days, some misunderstandings occur between them and the duo part their ways. What happened to them? What role did Anand (JD Chakravarthy) did in this relationship? Did Dev and Amuktamalyada got back together? What happens in the end? forms the rest of the story.

Karthikeya has sported a completely different kind of look in this movie when compared to his previous one and we can say that he has improved a lot in every aspect. Not only his dialogue delivery and facial expressions, but the actor has also worked hard and went under the skin of the character. Digangana Suryavanshi breathes life into her character.

She sure is looking absolutely beautiful in the movie and also delivered an honest performance. Her chemistry with Kartikeya and the bold scenes between them will also grab the attention of the audience. JD Chakravarthy got an interesting role in this film and he has delivered an outstanding performance. Vennela Kishore also got a meaty role in this film and has given his 100% in his role. Jazba Singh is good in her role. MD Asif is the perfect pick for the role. The rest of the cast also made their presence felt.

TN Krishna has prepared an interesting story for the film. The director has made the characters realistic which made the audience to relate with the movie even more. Also, his pace of narration is good and will keep the audience engaged. Production values by Kalaipuli S Thanu under V Creations are lavish.

It is evident that the producers have invested decent amounts without compromising in terms of quality. Music by Nivas K Prasanna is undoubtedly a plus point for the film. Not only a couple of songs, but his BGM also added more strength to the film. Cinematographer RD Rajasekhar has produced some colorful and bright visuals for the film. Editing by Praveen KL is decent.

Instead of preparing a solid story, the director has concentrated more on adding the entertaining elements which can grab the attention of the youth. The bold performances of the actors also became the highlight of the film. The way the director has handled the story and screenplay can be considered as the negative points of the film.

The high dosage of mass masala scenes will test the patience of the audience. Also, the second half is somewhat boring when compared to the first half. The love story between the Digangana and Karthikeya could have been shown in an interesting way. The lack of emotional content will also irk the audience. To conclude, 'Hippi' is an average film and can be watched once