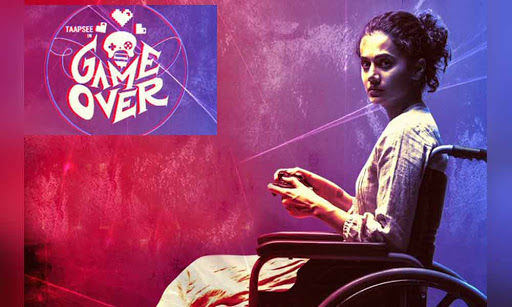 Taapsee Pannu starrer Game over is in the theatres now. The makers finished the movie silently and are now coming up with this one in the theatres. Ashwin Saravanan directed the movie while the film is jointly produced by Reliance Entertainments and Y Not Studios. Tipped to be a thriller, the film already created a decent buzz with the trailer. The review of the film is here.

Swapna (Taapsee Pannu) is a videogame developer living in a spacious bungalow with her maid Kala (Vinothini). Swapna is extremely suicidal and often have panic attacks too. She is slowly coming out of a trauma that she underwent in the past. But strange things take place which pushes Swapna into more trauma. What happened to her? What is Swapna's past? How did these things unfold towards the end? Forms the story of the movie.

Taapsee is undoubtedly the show stealer for the film. Based on the story, the entire movie revolves around her character and the actress has delivered a mesmerizing performance in this film. Especially in some scenes, Taapsee has proved her versatility as an actress and has nailed the character. Vinodhini Vaidyanathan not only got an interesting role in the film but also delivered her best performance in the film. Anish Kuruvilla acted naturally as a therapist.

Production values by Y NOT Studios and Reliance Entertainment are luxurious. We can say that the producers have invested decent amounts for the film. Music by Ron Ethan Yohan is outstanding. His excellent background score added more strength to the film. Dialogues by Venkat Kacharla are good. Cinematography by A. Vasanth is wonderful. His camera angles made the movie even more intriguing. Editing by Richard Kevin is clean and neat.

Director Ashwin Saravanan will definitely get the success credit for this film. He has narrated the story in a really interesting way. Instead of adding unnecessary elements, the director has made sure to be on point and succeeded in narrating the story in an interesting way from the start to the end. Also, there are some shocking twists in the film which will make us jump from the chairs. Game Over is a superbly written and a well made trippy new age thriller with awesome performances by Taapsee. The film is not just intelligent and terrifying, but it also respects the audiences' minds. Ashwin Saravanan is the director to watch out for and he passed his second too with distinction. Watch it.