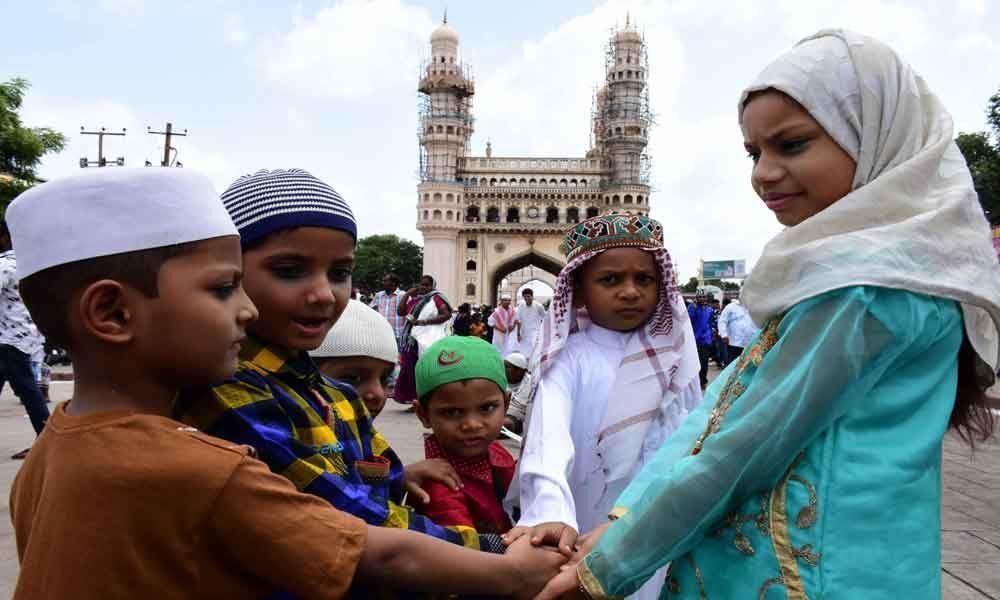 Muslims across the twin cities and the State celebrated Eid-ul-Adha, the festival of sacrifice (Bakrid), with religious fervour and devotion on Monday.

Hyderabad: Muslims across the twin cities and the State celebrated Eid-ul-Adha, the festival of sacrifice (Bakrid), with religious fervour and devotion on Monday.

The festival, celebrated by Muslims across the globe, symbolises sacrifice, absolute devotion to God Almighty and compassion for the poor. Attired in their best, Muslim brethren offered special prayers at the Idgahs and mosques in the morning and exchanged greetings. In the Capital city, thousands of Muslims offered prayers at Mir Alam Idgah, Mecca Masjid near Charminar, Madannapet, Chaderghat, Masab Tank, Secunderabad and other places.

City Police Commissioner Anjani Kumar visited various places in the Old City and supervised the arrangements for the festival. He told the media that police made elaborate security arrangements in the twin cities of Hyderabad and Secunderabad, to prevent any untoward incidents taking place.

Addressing the devout people before the Namaz, the Imams and other religious heads exhorted Muslims to imbibe the spirit of sacrifice and follow Prophet Ibrahim, who offered to sacrifice his son Prophet Ismail to please Allah. The Almighty replaced Ismail with a sheep just as Ibrahim was about to sacrifice him.

Also known as Bakr-id or Eid-e-Qurban, it is the second major festival of Muslims. The meat of the sacrificed animal is divided equally into three parts. The person making the sacrifice keeps one part for his family, while the other two parts are distributed among relatives and the poor.

The Old city in particular wore a festive look while butchers coming from other districts did brisk business. Hectic activity was seen in many parts of the city as the sale of goats continued throughout the Sunday night. The biggest congregation in Hyderabad was held at the historic Mir Alam Eidgah where over one lakh people offered prayers.