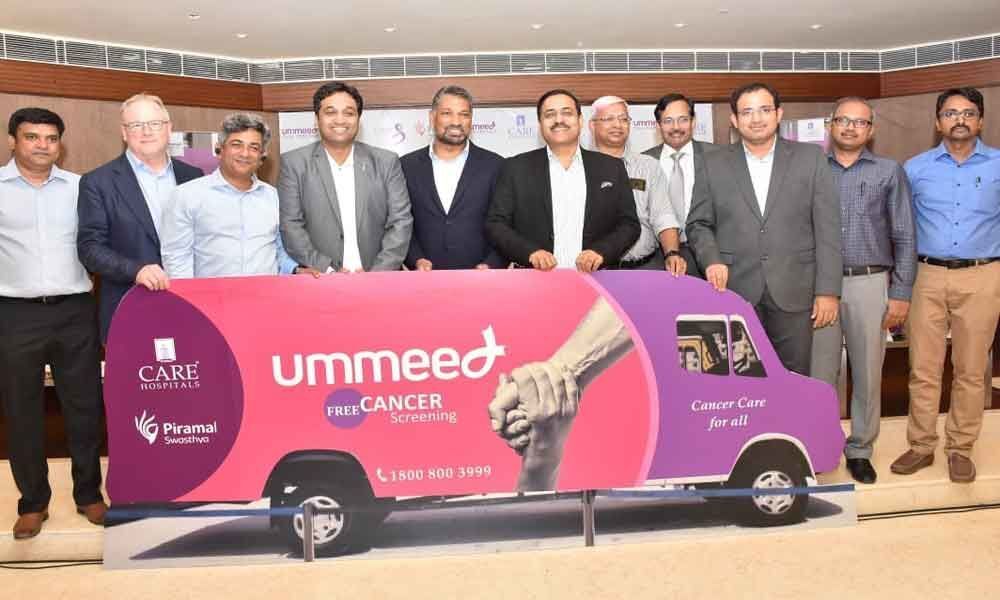 Telangana State has one of the highest incidents of breast, oral and cervical cancer. A study done by 'The Lancet' says that the Telangana state as of now has 30 percent increase in cancer incidents in last 20 years.

Hyderabad: Telangana State has one of the highest incidents of breast, oral and cervical cancer. A study done by 'The Lancet' says that the Telangana state as of now has 30 percent increase in cancer incidents in last 20 years. Cancer if detected early has a very high recovery rate. However, many in rural or remote areas do not have access to facilities for proper diagnosis and follow up care, leading to high mortality due to lack of awareness campaigns and poverty problems and accessibility issue.

CARE hospitals in association with Piramal Swasthya announced the launch of community-based cancer screening programme named 'UMMEED' a hope is essentially the assurance given to the population of Telangana, to detect early and reduce the mortality due to cancer. It is expected to reduce the impact of the cancer burden on the State through early detection of oral, breast and cervical cancer in rural areas. The screenings are offered free of cost in rural Telangana, the programme will help screen patients in interior villages and a special all women team manning the van will encourage & educate the rural population about the importance of detecting cancer early.

Vishal Phanse, CEO of Piramal Swasthya, said on the occasion: "The cancer incidence rate in Telangana rose to 74 cancer patients for a lakh population compared to that of 54 in 1990. Considering the growing incidence of cancer in India, Piramal Swasthya has released a need for community-based cancer screening programme to prevent, screen, diagnose and treat oral, breast and cervical cancer in rural areas.

Joining hands with Care Hospital is a momentous step forward against cancer. It's such an amazing idea to start this in Telangana and will make everything easy for the people in rural and remote areas in the State. Breast, cervical and oral cancer if caught at stage one can be cured at very less cost, this is one example of a private partnership based on not for profit which is going to have a huge impact in the national health parameters of the state. I would like to thank CARE for thinking this and less than two years we will have enough evidence that this has grown across the state of Telangana."

Dr Raajiv Singhal, CEO CARE Hospitals, said, "Oncology has become the new focus in the country due to its increasing growth in the country. When we started discussing this four months ago, there was very active involvement from both the sides and was followed up by both companies at regular intervals. Then we decided to create a model which will reach out to maximum number of people setting a classical example of two private giants working together and our objective is to screen 50,000 patients during the year and over a period of time when we will start our oncology outside Hyderabad, we will do similar numbers every year."