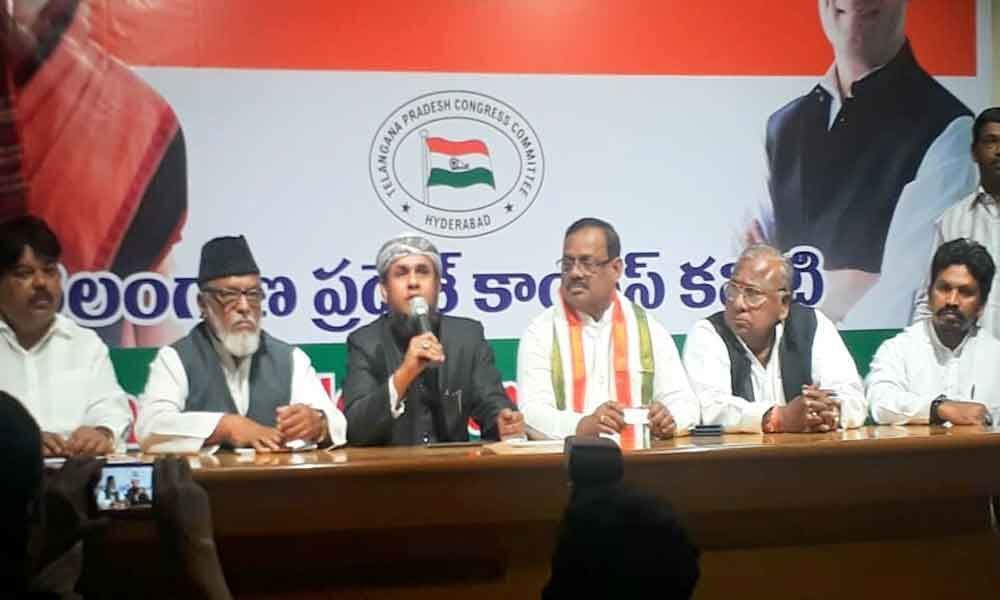 Indian Union Muslim League (IUML) has announced its support to the Congress in Telangana in the Parliament elections and demanded that the Congress provide 12 per cent reservations to Muslims in Telangana and to give judicial powers to the Wakf Board.

Hyderabad: Indian Union Muslim League (IUML) has announced its support to the Congress in Telangana in the Parliament elections and demanded that the Congress provide 12 per cent reservations to Muslims in Telangana and to give judicial powers to the Wakf Board.

In a letter addressed to state Congress in-charge RC Khuntia, the general secretary of IUML, Abdul Gani, wanted the Congress to implement a 15-point programme in all the districts of the state for the welfare of the Muslims. He demanded the Congress implement separate sub plan for the minorities of the state, to establish Urdu medium schools and degree colleges, and to give proper share to Muslims in politics.

The TS unit of the party wanted formation of fast track courts to conduct trials of the Muslims being detained in prisons. It alleged that the BJP led government at the Centre has been trying to implement the Hindutva agenda and suppressing the religious and cultural rights of the Muslims. He informed that the Parliamentary Board of IUML has discussed the request of the Congress to give support and decided to accept it.

Speaking to The Hans India, Abdul Ghani said while seeing the present political scenario of nation and since after the NDA Government led by Narender Modi came into power the country is facing an threat to its constitution. BJP with its hidden agenda of 'Hindutva' is trying to imposed it by suppressing the religious and cultural rights of Minorities and dalits communities provided by the Indian constitution.

"Muslims are specifically targeted by these communai forces and killed by mob lynching in the name of Gou Rakshak, Love Jihad, Ghar Wapasi etc. In the history of independent india the country never witnessed that the four senior supreme Court judges come out and said publicly that the 'Democracy of India is at Stake' and 'things are not in order'. This was showing the country is losing its democratic fabrics and its going towards dictatorship, monarchism etc," he said.

According to him, implementation of demonetization, inefficient and complicated GST, brought hardships to the country and common people and their small businesses and impacting their daily livelihood in all means.

"Indian currency is losing its value against the US dollar in the international markets. The prices of fuels, cooking gas and daily use vegetables and commodities are rising day by day, we also feel that it's high time now that all the democratic and secular forces , organisations united to defend the nation, by securing the Constitution of India and in view of all these.

We, the IUML Unit of Telangana state, accepted your request of supporting the Indian National Congress and unanimously and resolved not to field our candidates and give our wholehearted support to INC in all the 17 Lok Sabha constituencies in this upcoming Parliament elections 2019," the party's state general secretary added.