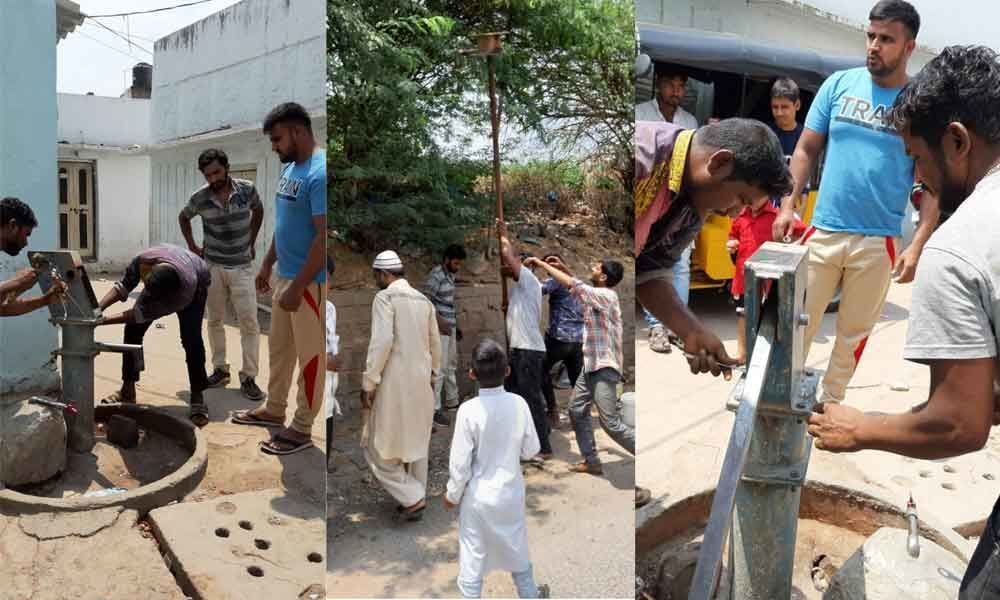 With the arrival of summer, water scarcity has hit parts of Old City. The residents of Talabkatta are forced to buy water for drinking purposes, as the water being supplied by the HMWSSB has failed to fulfil the needs during the season.

Talabkatta: With the arrival of summer, water scarcity has hit parts of Old City. The residents of Talabkatta are forced to buy water for drinking purposes, as the water being supplied by the HMWSSB has failed to fulfil the needs during the season. Despite many a representation to repair the available hand-pumps in the area, there is negligible response from authorities.

"In Madina Nagar, water is provided only for 2 hours on alternate days. But for almost one hour, people get contaminated water. They patiently wait for clean water which comes for just 1 hour, which would not be enough for two days," said Mohammed Lateef, a resident. He also said that most of the residents were buying water for drinking purposes and the water which was being filled up in tanks, drums and other containers was being used for bathing and other purposes.

Syed Mohammed Hussain, a resident of Sadat Nagar, said that each year these hand-pumps provided some scope of relief, which could be used for bathing and cooking. But this year the pumps are yet to get repaired. "Starting from the month of March we have made many complaints for repairing the pumps to the officials, but the matter has been ignored. Local activists are pursuing the matter and repaired some of them in area," he added.

"The hand-pumps in most areas of Yakutpura constituency need to be repaired, as the areas have been reeling under shortage of water. Recently, some of them have been repaired, but still many of them are yet be repaired, as summer is looming and it's the peak now", said Abdul Rahman, a social activist.

Speaking to The Hans India, Abdul Rahman said that the water being supplied by HMWSSB was not enough and the area has the shortage of water during summers. The hand-pumps in Madina Nagar, Chota Chandra Nagar, near Yakutpura Railway Station, Hafez Nagar, Sadat Nagar are repaired by the HMWS&SB on regular complaint. But in other areas the department is yet to take up the matter. "Recently some 10 hand-pumps were repaired after the matter was seriously pursued with the department. I request the authorities to take up the matter in other areas and repair the hand-pumps for the sake of people," he added.