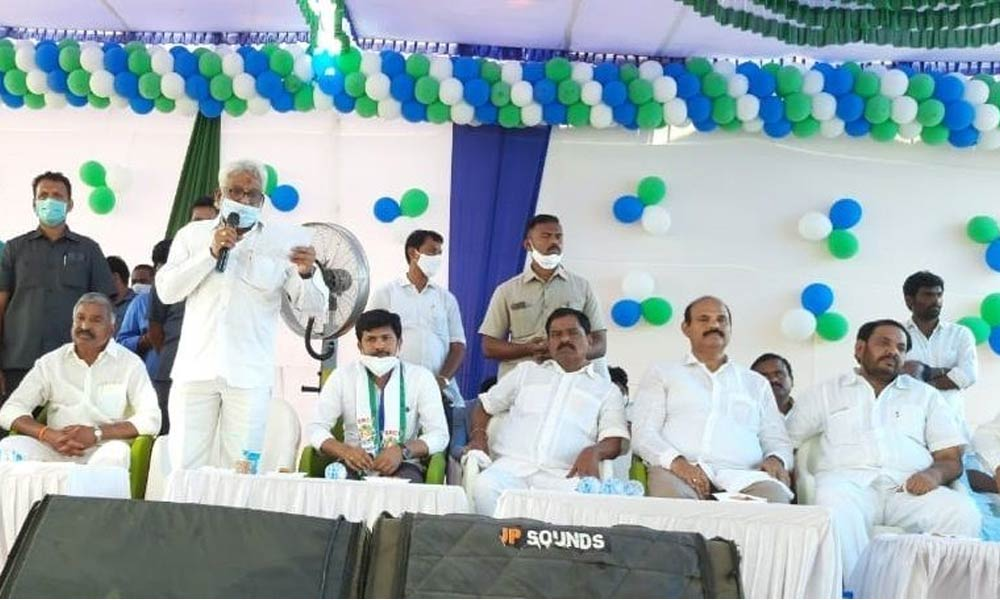 YSR Congress candidate of Tirupati Lok Sabha bypoll Dr M Gurumoorthy started the campaign in the Sarve palli constituency on Thursday offering prayers at Venkateswara Swamy temple in Golagamudi village. A public meeting was arranged in the village on the occasion.

Speaking in the meeting, Narayana Swamy taking potshots at the TDP state president K Atchannaidu, said that the TDP had done practically nothing to the state after the bifurcation of the state. He asked why Atchannaidu has been making such offensive comments against the ruling party when they practically failed to protect the state from difficulties. He expressed confidence that Dr M Gurumoorthy will win a majority of 5 lakh votes in the ensuing polls.

Panchayat Raj Minister P Ramachandra Reddy said the YSR Congress has completed 90 per cent of its poll promises within 18 months. Education Minister Adimulapu Suresh said women empowerment has been possible with Jagan Mohan Reddy as he respected them and gave an opportunity for many women in local bodies, assembly and even picked them as Deputy Chief Ministers. Stating that they were treating the polls as a referendum on the government welfare schemes, he hoped the voters would give a historic judgment in the polls.

TTD Chairman Y V Subba Reddy said the Chief Minister has been providing benefits through various welfare programmes irrespective of caste and religion. Sarvepalli MLA Kakani Govardhan said they had developed the constituency with Rs 320 crore within 18 months. He appealed to voters and party cadre to work for the success of the LS nominee.

Party candidate Dr M Gurumoorthy said the Chief Minister has been striving hard in the state to benefit all sections of people. Stating development is prime agenda of government, he sought support from the people to continue welfare schemes and development. MLA K Parthasarathi also spoke.