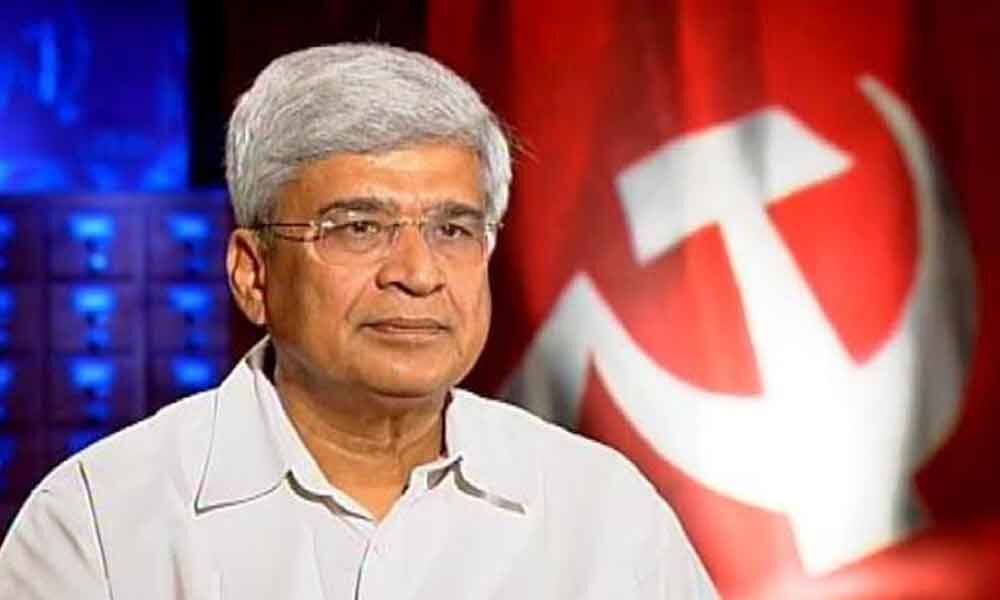 The CPI-M, the main force in Kerala's ruling Left Democratic Alliance (LDF), on Sunday reacted sharply to the Congress's announcement that party President Rahul Gandhi would contest from the state's Wayanad parliamentary constituency and vowed to defeat him.

New Delhi: The CPI-M, the main force in Kerala's ruling Left Democratic Alliance (LDF), on Sunday reacted sharply to the Congress's announcement that party President Rahul Gandhi would contest from the state's Wayanad parliamentary constituency and vowed to defeat him.

"In Kerala, it is the LDF, which is the main force that can fight the BJP. And Rahul Gandhi is going to Kerala to fight the LDF, which means we have to take on the United Democratic Front (UDF), of which he will be a candidate.

"The UDF consists of not only Congress but Muslim League and other parties which have a dubious reputation. And we shall work to defeat the UDF in all constituencies including Wayanad," he said in a video message.

"In Kerala, as we all know, the fight is between the Left and the Congress, with the BJP not in the picture at all. He should have fought against the BJP. Now that he has decided to contest from Wayanad, we, the Left will see to defeat him," he told the media in Thiruvanthapuram.

State CPI-M Secretary Kodiyeri Balakrishnan said Gandhi's move to Wayanad will ensure a Left victory on all the 20 seats in the state.

"He is coming here because he is not confident of his win in Amethi. And the Left will show Gandhi what our power here is," he said, adding that the Left was confident of repeating its 2004 performance when they won 18 out of the state's 20 seats.

The Wayanad seat has been allocated to the Communist Party of India (CPI) and its candidate P.P. Suneer said that he was not alarmed by the stature of his opposing candidate.

"The candidate does not matter, as elections are fought on issues. By now I have already completed three rounds of my campaign and I am on a strong footing as the backing that I have is of the Left forces, which has a good chemistry with the electorate in the Wayanad constituency," he said.

Gandhi's contesting from Wayanad was greeted with excitement in Malappuram, the stronghold of Indian Union Muslim League (IUML), UDF's second biggest constituent in Kerala - and where three of Wayanad's assembly segments fall in.

The Bharatiya Janata Party (BJP), which has given the Wayanad seat to ally Bharat Dharma Jana Sena (BDJS), however, poked fun at the Congress President's shift to the southern state.

"It's a shame for the Congress Chief to run away from Amethi and seek solace in the arms of the IUML, which is strong in Wayanad," said state BJP President P.S.Sreedharan Pillai.

Making the announcement in New Delhi, Antony said Gandhi was not keen to contest on a second seat. "But there was a tremendous pressure from the south Indian states, the Congress party as well as from the allies that he should contest."

Wayanad became a Lok Sabha constituency in 2009, and M.I. Shanawaz of the Congress won it that year by a margin of 1,53,439 votes. However, his margin dropped to 20,870 in 2014, and last year he passed away after a long illness. The seat has been lying vacant since then.

Considered a safe seat for the Congress, there was a scramble between the party's various factions for a ticket to Wayanad and former Chief Minister Oommen Chandy had even managed to swing it in favour of his close confidante T. Siddique.

However, Chandy was the first to speak of the possibility of Gandhi contesting from Wayanad last week.

Wayanad will vote on April 23 and Amethi on May 6. The counting of votes for the country will be held on May 23.