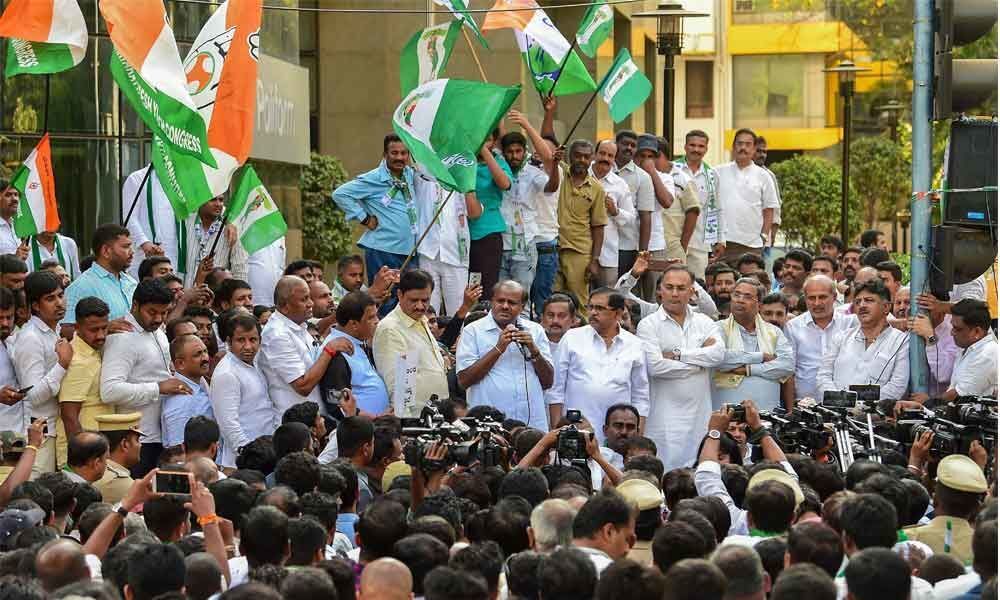 Bengaluru: Income Tax officials on Thursday conducted a search and seizure operations at the homes of Minor Irrigation Minister CS Puttaraju and his re...

Bengaluru: Income Tax officials on Thursday conducted a search and seizure operations at the homes of Minor Irrigation Minister CS Puttaraju and his relatives. The operations were carried out just hours after Chief Minister HD Kumaraswamy announced that over 300 I-T officials along with CRPF jawans were en route to Mandya to conduct raids on JD(S) leaders.

The Chief Minister has dubbed the I-T raids as surgical strikes by Prime Minister Modi and accused Income Tax officers of corruption. "PM Modi's real surgical strike is out in the open through I-T department raids.

The Constitutional post offer for I-T officer Balakrishna helped the PM in his revenge game. Highly deplorable to use govt machinery, corrupt officials to harass opponents during election time," he alleged, referring to the DG of Income Tax departments for Karnataka and Goa, who was promoted during the Modi regime.

The I-T searches sparked protests by Puttaraju's followers who had gathered at Chinakurali and shouted slogans against the BJP government.

I-T sleuths who came in several vehicles entered Puttaraju's ancestral home at his home town Chinakurali in Pandavapura. They also conducted search and seizure operations at the home of Puttaraju's nephew Ashok located in Vijayanagar area of Mysuru city. Ashok is a contractor for national and state highway works.

Income Tax sources say that Puttaraju's close aide Ramesh, another class 1 contractor, may also face search operations due to his close proximity with the minister. The sources said the raids were conducted based on concrete information that huge amounts of cash were being kept at the homes of Puttaraju and his supporters.

"The department gathered information that over Rs 40 crore cash was being kept at Puttaraju's house, which was being used for election purposes. The search operations were conducted to see whether the money is accounted for, and how the minister procured the cash. We also received information that the money was brought in to distribute it to voters," the I-T sources said.

Search and Seizure operations have also been conducted at the houses of several class one contractors and close associates of Public Works Department Minister and Kumaraswamy's brother HD Revanna in Hassan, too, sources said. The homes of Revanna's associates Ashwath Narayan Reddy and Raya Gowda were also raided.

The sleuths also conducted raids on the Public Works Department office in Hassan. Search operations were also conducted at the office of Sruthi Motors in Shivamogga. Sources say that the owner of the outlet DT Parameshwar is a close associate of the JD(S) candidate from Shivamogga, Madhu Bangarappa.

The Income Tax officials also conducted a search and seizure operation at JD(S) veteran BM Farooq's office located on Residency Road in Bengaluru. The officials also raided the home of a PWD contractor in Chikkamagaluru.

Puttaraju is one of Kumaraswamy's most trusted lieutenants and is also a member of Kumaraswamy's coterie of advisors. Puttaraju was put in charge of handling the election campaign of Nikhil Gowda, the Chief Minister's son, who is the Congress-JD(S) coalition's candidate for Mandya.

The Chief Minister has warned that he would follow what his West Bengal counterpart Mamata Banerjee did to counter the alleged 'misuse' of central agencies. Mamata Banerjee had staged a "Save the Constitution" dharna between February 3 to 5 in Kolkata after the CBI's failed bid to question Kolkata Police Commissioner Rajeev Kumar in connection with chit fund cases.

Congress and JD(S) party workers also announced that they would stage a protest outside the Income Tax Department's office in Bengaluru later in the day.