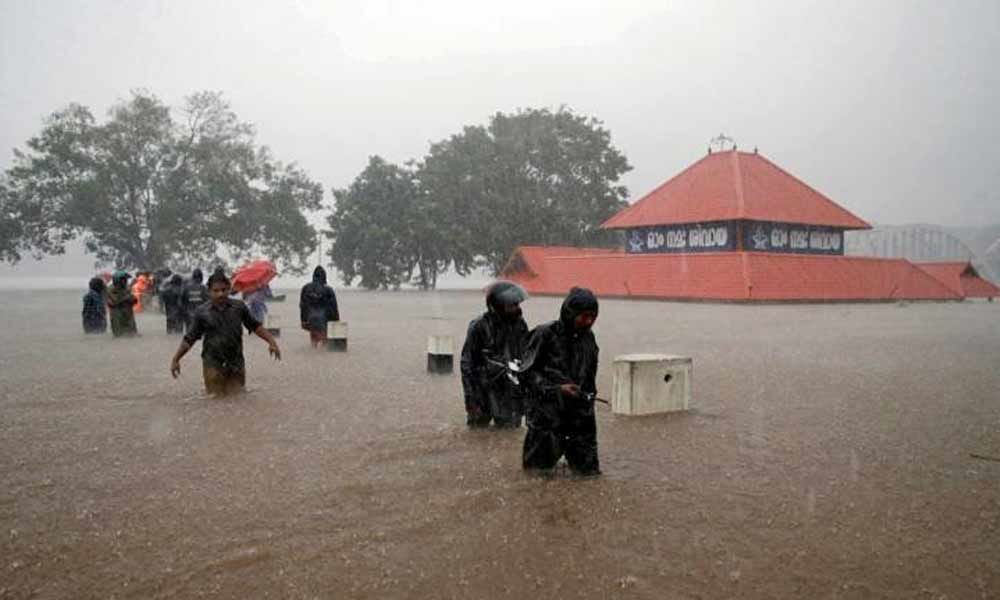 The death toll in Kerala floods has reached 42 and more than one lakh people have been shifted to over 800 relief camps across the rain-battered state, Chief Minister Pinarayi Vijayan said on Saturday.

Thiruvananthapuram, Aug 10 (IANS) The death toll in Kerala floods has reached 42 and more than one lakh people have been shifted to over 800 relief camps across the rain-battered state, Chief Minister Pinarayi Vijayan said on Saturday.

The 42 deaths, of which 11 are from Wayanad, have been reported in the past three days.

Addressing the media here after a review meeting on the floods, Vijayan said that 80 landslides, which have caused the maximum destruction, have been reported from eight worst affected districts, including Meppadi in Wayanad and Kavalapara in Malappuram districts.

"Authorities are still not able to ascertain the actual number of missing in these two areas. According to unconfirmed reports, 41 are missing from Kavalapara," said Vijayan.

A red alert for heavy rain has been issued today in Ernakulam, Palakkad, Idukki, Malappuram, Kozhikode, Waynad and Kannur.

"In Wayanad, the Banasura dam is overflowing. People living in the downstream of the dam have been moved to relief camps. The dam gates will be opened today at 3 p.m.," said Vijayan.

"The biggest problem is that we are not able to conduct aerial operations due to inclement weather conditions in the worst affected places. It has been informed to us that as soon as the weather clears ups, the aerial operations will be carried out in those areas," said Vijayan.

He said that despite heavy rains, water level has gone up in only three dams. It continues to be low in Idukki and Pathanamthitta, he said.

"The rains in Ernakulam district have slowed down. All the government officials and offices are engaged in relief work and will be working on holidays. Cellphone towers on wheels are being set up in areas where communication facilities have been snapped," said Vijayan.

"The railways are working overtime to take stock of the damages and commence operations of trains. The Army's help has been sought for inspection of bridges," he said.

However, the Meteorological Department has predicted more rains in the state in the coming days.

Meanwhile, with rain subsiding in Ernakulam, water has receded from the Cochin International Airport and operations are likely to commence from Sunday afternoon.

Emirates Airlines on Saturday announced that they will operate additional flights from Thiruvananthapuram airport following cancellations of flights from Cochin airport over the past few days.