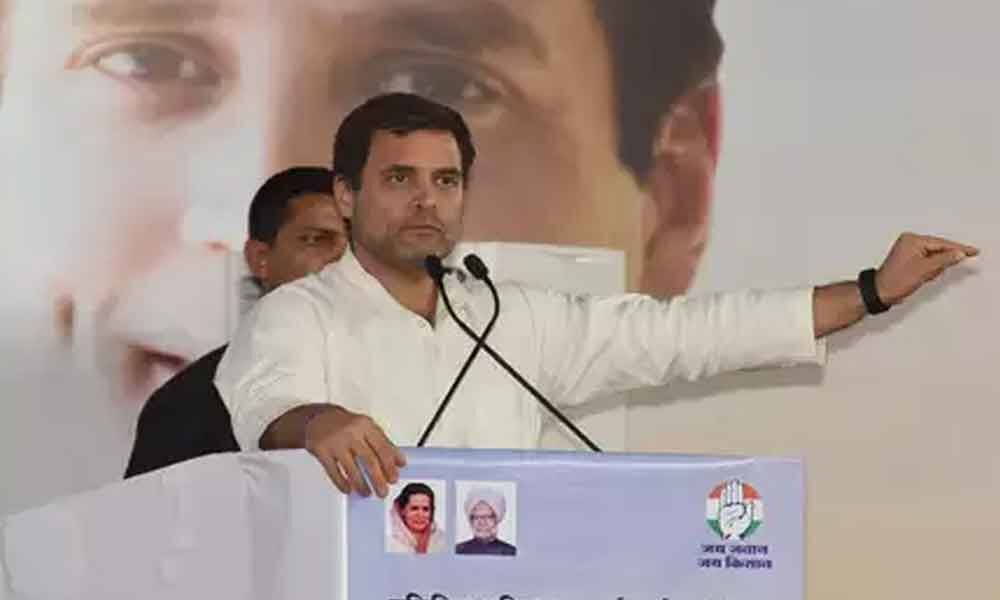 Accusing the prime minister of pushing a particular narrative in the media through the PMO, Gandhi said the PM will not be able to deflect from real issues.

NEW DELHI: Congress President Rahul Gandhi has said that Prime Minister Narendra Modi's behaviour betrays a "sense of panic" and hit out at him for presiding over a "failed" economy and not delivering on poll promises.

In an interview to, Rahul Gandhi said PM Narendra Modi is more of a "Publicity Minister" than a Prime Minister and is "floundering because of his arrogance".

On his own prospects of becoming the prime minister should the post Lok Sabha election result scenario permit, Rahul Gandhi said "it would be arrogant for me to comment on the issue" and that "the people are the masters and they will decide."

Accusing the prime minister of pushing a particular narrative in the media through the PMO, Gandhi said the PM will not be able to deflect from real issues.

Castigating the PM for failing to deliver on 2014 election promises and presiding over a "failed" economy, Gandhi charged, "Mr Modi's arrogance and thirst for power, his obsession with self-promotion even when that promotion is filled with lies and his false belief that only he has the solution to every one of India's problems and consequently he doesn't need to consult anyone else, is why he is floundering."

He was asked what his last message to the PM was before the LS election cycle sets in.

He listed the alleged "destruction of institutions, increase in hate and bigotry, a palpable increase in anger and violence in society and attacks on rights of SC-ST's" as some other issues that the electorate will consider when it sets out to vote.

"The false promises of Mr Modi in 2014 - putting 15 lakh in each bank account, creation of 2 crore jobs, the building of 100 smart cities and the bringing back of 80 Lakh crore black money from abroad, will be major election issues.

"In the midst of all the BJP created gloom, the Congress Party's NYAY offers a ray of hope and its incredible scale and transformational potential, is going to make it a key issue in this election," he said.

On the perception that the BJP has an edge in the ongoing war of narratives post the Pulwama attack events, the Congress chief alleged that there was pressure on the entire media created through phone calls, threats of CBI, threats of Enforcement Directorate, to push a "particular narrative".

"There's pressure on the media to push a particular narrative that comes out of the PMO. There are some voices in the media who are fighting this pressure and I commend them," he said.

On electoral funding, Gandhi said while Congress completely supports the demand for transparency, electoral bonds were actually doing just the opposite of transparency.

"Mr Modi - a man who came riding on the plank of fighting corruption, has done everything to encourage corruption! And Electoral Bonds is a principal example thereof," he charged.

Asked how important this election was for the Congress after the party was down to 44 in the last Lok Sabha polls, Gandhi said, "The last election was an aberration. This election, we will do much better with people's support."

The Congress chief said the party after 2014 had got down to basic brass tacks to rework, rebuild and resurrect the organization as a whole and it was initiated by decentralizing power.

The party is using technology to communicate more effectively with its workers, right up to the booth level. SHAKTI is one such technology driven platform that now has over 10 million workers registered on it.