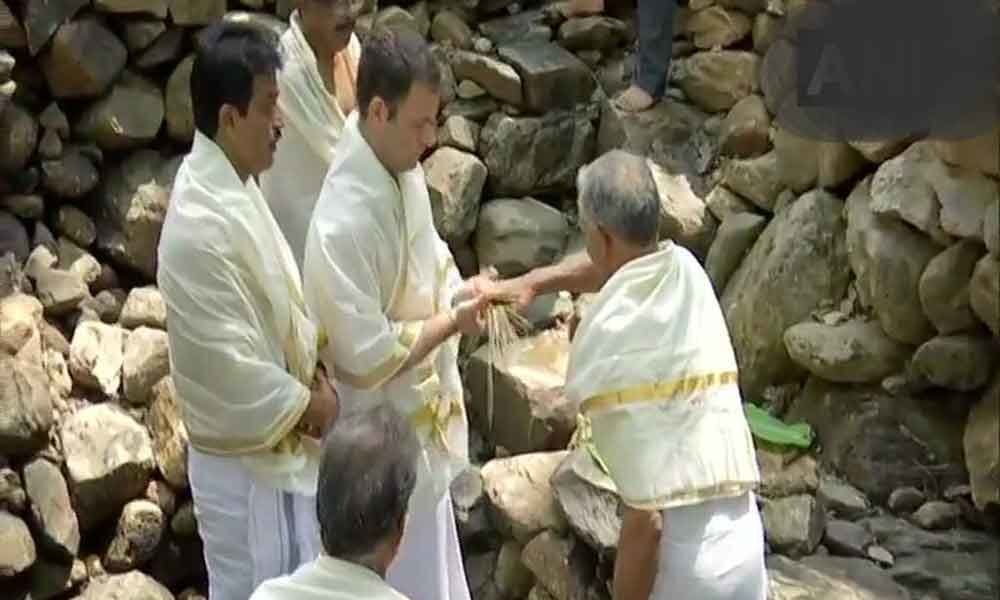 The Congress president is scheduled to address rallies in Kerala's Alappuzha and Thiruvananthapuram later in the day.

Wayanad: Congress President Rahul Gandhi offered prayers and performed rituals for his late family members as well as victims of the Pulwama terror attack at Thirunelli temple here on Wednesday.

Rahul, who is contesting the ensuing polls from Wayanad parliamentary constituency, was accompanied by Congress General Secretary KC Venugopal, among others.

"Last time also Rahul had wished to come here but because of security restrictions, he could not do it. Here is the place where the ashes of Rajiv Gandhi (Rahul's father) were immersed, in the Papanasini river," Venugopal told media here.

"As per the priest's directions, he has performed all rituals for his grandmother (Indira Gandhi), father, forefathers, and victims of Pulwama attack," he added.

The Congress president is scheduled to address rallies in Kerala's Alappuzha and Thiruvananthapuram later in the day.

The Gandhi scion had filed his nomination from Wayanad Lok Sabha seat on April 4. He was accompanied by his sister and party general secretary Priyanka Gandhi Vadra.

Apart from Wayanad, Gandhi is contesting from the Congress stronghold of Amethi in Uttar Pradesh, where he will face BJP's Smriti Irani.

Congress is contesting on 16 out of the 20 Lok Sabha seats in Kerala leaving four seats for its allies – two for Indian Union Muslim League (IUML) and one each for Kerala Congress (Mani) and Socialist Party (RSP).

Polling in Kerala will be held in a single phase on April 23. Counting of votes will take place on May 23.