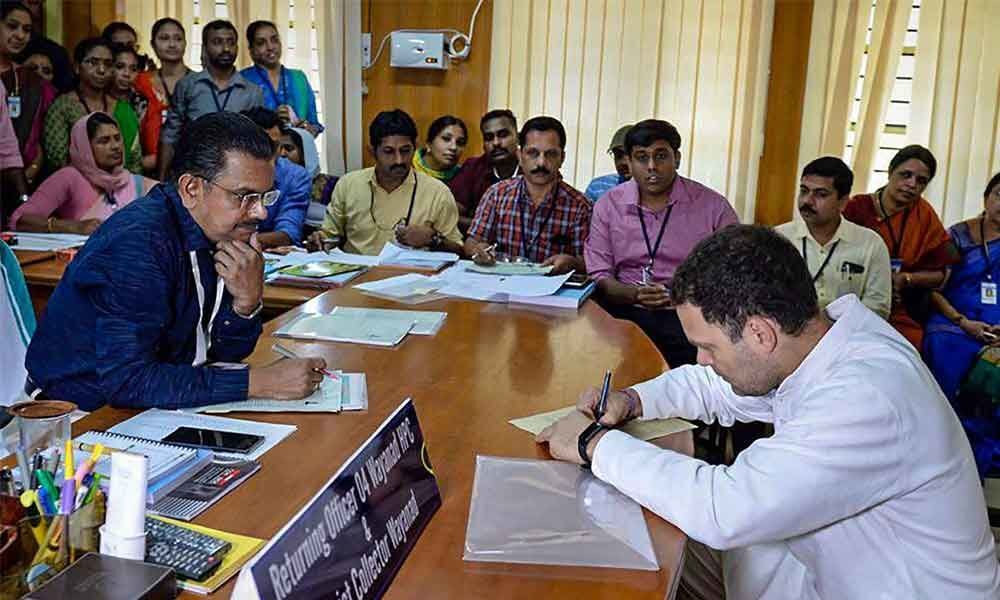 Congress president Rahul Gandhi, who is fighting the Lok Sabha elections from his traditional bastion Amethi in Uttar Pradesh, on Thursday filed nomination from Wayanad -- a Congress stronghold in South India.

Kalpetta (Kerala): Congress president Rahul Gandhi, who is fighting the Lok Sabha elections from his traditional bastion Amethi in Uttar Pradesh, on Thursday filed nomination from Wayanad -- a Congress stronghold in South India.

Hundreds of workers of the Congress-led UDF assembled outside the district collectorate in Wayanad, a scenic hill area in the Western Ghats of Kerala, as Gandhi filed the nomination.

Braving the scorching heat, thousands of party workers, including men, women and youth gathered in Kalpetta town and its suburbs to see the Congress' prime ministerial candidate, who landed here to file his nomination from the constituency which has the presence of various ethnic tribal groups.

After completing the nomination procedures at the collectorate here, Rahul Gandhi along with Priyanka Gandhi and senior leaders of the Congress-led UDF in Kerala undertook a roadshow to greet the voters of this constituency.

The narrow lanes of Kalpetta town were packed with excited onlookers waiting in anticipation for the Congress chief and other party leaders, including Priyanka Gandhi.

South, north, east, west, centre... all are one... There is an assault taking place across the country by the RSS and BJP. I just want to send a message and I will stand from south India and north India. My aim was to give a message," he said.

"There is a feeling in south India that the way the Narendra Modi government is functioning, their (south) culture, language, history all being attacked.

So, I wanted to give a message that I will fight from north and south," the Congress chief said, in response to his main opponent in Amethi, Union minister Smriti Irani alleging that his decision to fight from Wayanad was an insult to the people of Amethi.