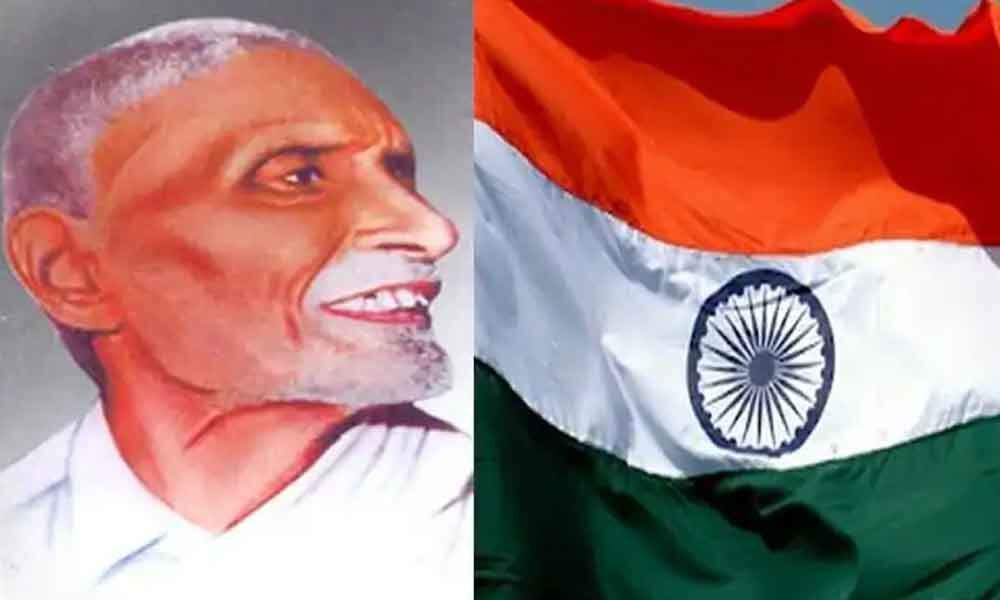 Pingali Venkayya, a strong freedom fighter and the person who designed the Indian national flag, was born on August 2, 1876.

Pingali Venkayya, a strong freedom fighter and the person who designed the Indian national flag, was born on August 2, 1876. Venkayya joined the British Indian Army at the age of 19 and participated in the Anglo-Boer war in Africa. During the war,

Venkayya met Mohandas Karamchand Gandhi and formed an association that would last for more than 50 years.

On March 31, 1921,at the Kakinada conference at the Indian National Congress, Venkayya compiled the idea of a national flag.

♦ However, Gandhi modified the flag by adding a white line in the middle to represent other religious communities in the country.

♦ Three colors were now adopted only days before Indian independence, on July 22, 1947 at a meeting of the Constituent Assembly.

The flag was then approved by Congress in August 1931, at that time the party had used it during a peaceful protest against British rule.

Pingali Venkayya left its mark on Indian land. Although Venkayya designed a national flag, his name was not much glorified in Indian history.

According to a Hindu report, he has worked in the fields of geology and agriculture for the country.

His business was recognized long after his death (1964), this was how: His village built a statue in his honor in 1998 .The stamp on him was commemorated in 2009.

The Andhra Pradesh government recommended its name to Bharat Ratna in 2012. Venkayya died on July 4, 1963 in Vijayawada.

On Tuesday, Twitterati showered Gandhi with their tribute.

Remembering #PingaliVenkayya garu, architect of our National Flag on his birth anniversary. He was an eminent personality from Andhra Pradesh and a revered freedom fighter. His contribution towards the freedom struggle was truly monumental and made him forever immortal.🇮🇳

The National Flag is that one thing which inspires unity and the sense of patriotism in all of our countrymen. It is a symbol of our National Honour. On the occasion of his Birth Anniversary, I pay tributes to Sri Pingali Venkayya Garu, who designed the National Flag of India. pic.twitter.com/8pHh3b5OvO

Tributes to Indian freedom fighter and designer of our National flag, Shri Pingali Venkayya garu on his birth anniversary.#DrKLaxman pic.twitter.com/fcZKhmuL7x

Tributes to Shri Pingali Venkayya ji on his birth anniversary.

As a freedom fighter and designer of India's National Flag 🇮🇳, his contribution to nation-building will always be remembered. pic.twitter.com/nFrU8WYAaB

Remembering Pingali Venkayya garu on his birth anniversary. A pride of Telugus, he designed one of 1st versions of national flag of India.

Today is birth anniversary of Pingali Venkayya who was an Indian freedom fighter and the designer of the flag pic.twitter.com/s3pJ2EY0U6