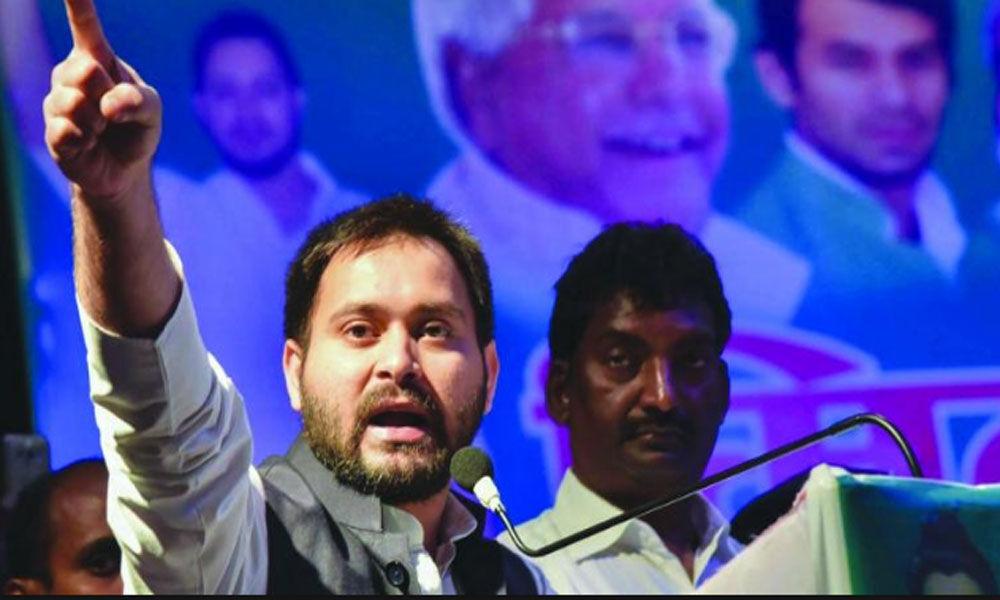 Patna: RJD leader Tejashwi Yadav on Monday urged opposition leaders to take a united stand against what he called a "campaign of distortion" by pro-BJP news channels, and he was backed by his father Lalu Prasad who gave the call - "boycott Modi media".

While they didn't name any particular channel, the BJP hit back accusing Mr Yadav of "sitting in the lap of the Congress which is famous for its blatant use of the media".

In the strongly-worded letter, Mr Yadav alleged, "A spectacle is produced every evening with the sole aim of denigrating all the opposition parties. It is an open secret that a powerful section of the television media is deeply vested in the electoral fortunes of the BJP".

Lalu Prasad, who heads the RJD and is in Ranchi now serving sentences in fodder scam cases, retweeted the post on his own twitter handle, operated by his close aides, with the hashtag #Boycott_Modi_Media.

The BJP reacted with indignation, accusing the RJD heir apparent of "sitting in the lap" of the Congress notwithstanding alleged indifference of Mr Gandhi to his plank of social justice and reminding him of throttling of the media during the Emergency.

The former deputy chief minister said, "If it was a case of subtle siding with the party in power, the spokespersons of various opposition parties would have expected to counter the tilt in rational debates held in news channel studios."

Many news channels "have not only given up pretence of impartiality... but have gone ahead to spout vitriolic hate in Indian society and incite violence", he said.

Without naming any media outlet or personality, Mr Yadav alleged that many senior and well-respected journalists have been warning about the "near-total breakdown of the ethics of journalism in these corporate house-funded news channels".

He claimed that the news channels have been seized fully by fascist tendencies and that no rational debate is possible at these studios.

"We appeal to all political parties in the opposition and conscientious voices of the Indian public sphere not to participate in the shouting matches held in the name of debate by these channels and anchors and to refuse to be complicit in their campaign of distortion and deceit.

"Conspicuous absence of voices from opposition shall not allow them to continue with their pre-scripted debates and discussions," the RJD heir apparent added.

He urged the opposition parties and people to take a "united and collective call" on this.

Reacting to Yadav's initiative, BJP state spokesman Nikhil Anand advised him not to sermonise sitting in the lap of the Congress which is "famous for its blatant use of media".

"Your echo on social justice has never got any support from @RahulGandhi. Remember Congress is hard core anti-Mandal, anti-Dalit and anti-OBC," he said.

"Why don''t you remember those days when public broadcasters were called Indira Darshan and Rajiv Darshan. Hope you are well aware of the media ban during Emergency. @RJDforIndia and @CongressforIndia must not force media to be their mouthpiece," Mr Anand said in another tweet.