What is Pakistan's chemistry with Congress, asks Modi 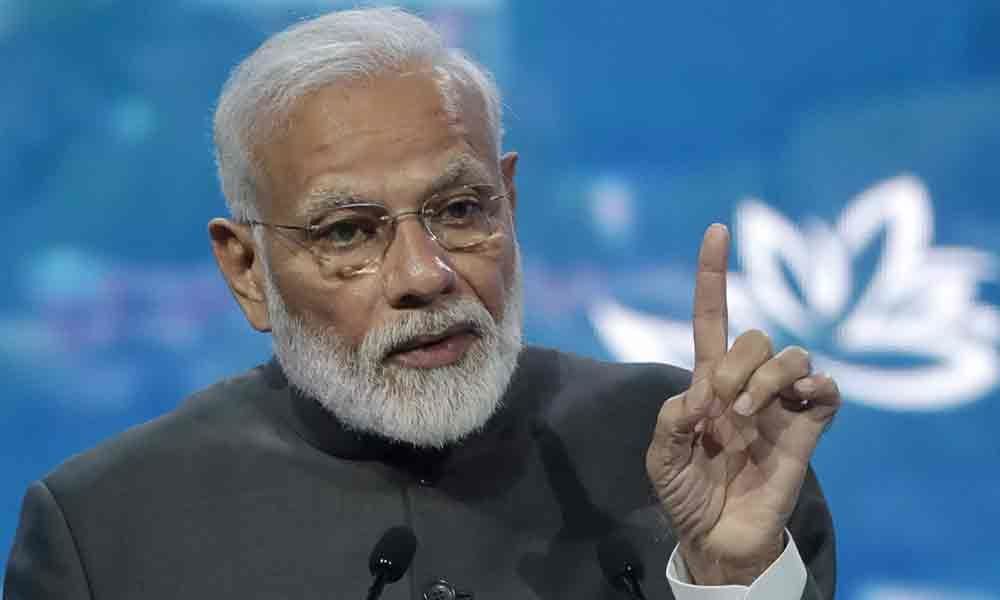 Prime Minister Narendra Modi on Friday said no one - neither jawans"nor farmers or sportspersons - were safe under the Congress' "misrule", while terming abrogation of Article 370 his real tribute to brave soldiers.

Gohana/Hisar (Haryana): Prime Minister Narendra Modi on Friday said no one - neither jawans"nor farmers or sportspersons - were safe under the Congress' "misrule", while terming abrogation of Article 370 his real tribute to brave soldiers.

Lashing out at the party for not supporting it on Balakot or Article 370 decisions, the Prime Minister asked "what sort of chemistry the Congress has with Pakistan".

"Pakistan uses the Congress to strengthen its case globally on issues against India," he said as he slammed the opposition party for not supporting its decision taken in the national interest.

"Whenever we talk of Swachh Bharat or surgical strike, the Congress gets stomach ache.

"And if by chance anyone says Balakot, then Congress starts jumping with pain. Pakistan uses them to strengthen their case globally, what sort of chemistry is this?" he added.

Confident of his party BJP's return in the state, Modi said the Congress indulged in corruption in agriculture and did scams in sports.

He was addressing public meetings, first in Gohana in Sonipat district and later in Hisar town, ahead of the single-phase polling for the 90-member Haryana Assembly on October 21. The campaigning will end on Saturday evening.

Modi said the Congress in the state has already accepted defeat.

"It was clear in their talks in the video that they were saying that it would be enough if they win 10-15 seats. These are their words and made just before the elections. Those who have already accepted their defeat and gave up the ground can't do anything for Haryana," Modi said while referring to a purported video which went viral a few days back.

The video showed Congress leaders counting seats outside Parliament and arguing about their dismal prospects across the state.

In his address both in Gohana and Hisar, Modi didn't forget to remind the public that Monday being a holiday owing to polling, making it an extended weekend, they should not miss the opportunity to exercise their franchise.

"Since October 21 is Monday, people will get two leaves -- Sunday (October 20) and Monday (October 21), the day polling will take place. You should remain present at their local booth and ensure huge turnout."

The Prime Minister said corruption was rampant in sports during Congress' rule.

Referring the number of athletes Sonipat has produced, he said: "This region has made India proud in every field, be it fighting in the wrestling ring or fighting against terrorism. Sonipat means Kisan, Jawan aur Pehlwan."

"The Congress can blame me as much as they want but people of this country are with me. I thank you all for the support."

He also dismissed the opposition as a "divided lot".

"When the BJP government in Haryana was taking decisive steps for development of state, what was the opposition doing? They couldn't fight with us, so they were busy fighting among themselves. They destabilised their parties for self-interest, can they give stability to Haryana?" asked Modi.

Patting Chief Minister Manohar Lal Khattar's back, Modi said corruption was rampant during the Congress' rule. Even in sports, there was corruption. "But it all changed after 2014. Since then the government has taken several steps in the field of sports."

"I tell the Congress, you can abuse me as much as you want, that is fine with me. Till people of India give me their blessings, none of your abuse will taint me," he added.

Wooing the farmers in the state, the Prime Minister said the Central government is planning to spend Rs 3.5 lakh crore in five years "so our mothers and sisters, and farmers don't have to face shortage of water".

"Our effort is to ensure that farmers do not have to rely only on weather."