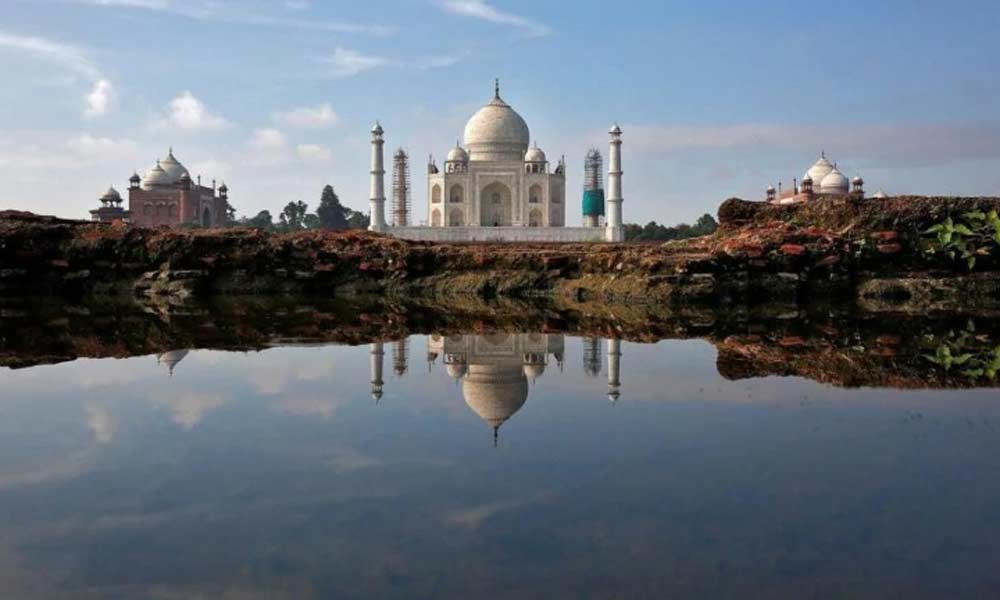 Ahead of US President Donald Trump's visit to the Taj city on February 24, the Yogi Adityanath government in Uttar Pradesh

Agra: Ahead of US President Donald Trump's visit to the Taj city on February 24, the Yogi Adityanath government in Uttar Pradesh, has mounted a massive image makeover of the city, which people say is unprecedented.

More than 900 cusecs of water have been released by the state irrigation department, after the sorry plight of the river Yamuna was highlighted by IANS and activists of the River Connect Campaign. The dry and polluted river bed was an eyesore that could ruin the mood of the visiting dignitaries, locals pointed out.

In the last two days, copious quantities of water have been released and men and machines mobilised to clean up the river bed right behind the Taj Mahal, just in case the president spends more time at the rear to view the Agra Fort and the river.

Responding to yellowing and dirt patches charges by local environmentalists, the Archaeological Survey of India has undertaken cleaning up of the monument in a big way, using the mud pack therapy to remove dark spots. The Taj Mahal should be ready by Friday, officials indicated on Thursday.

District authorities said more than 3,000 artists from Agra, Mathura, Vrindavan will present cultural programmes along the way, including Ram Lila, Ras Lila, Panchkula, Nautanki. Over 20,000 school kids who have been screened, will line up the route with flags to bring cheer and add to the festivities.

The administrative officials said beggars in the city have been forced out of the city. The MG Road and the VIP road from the Kheria airport to the Taj Mahal will be sanitised and beggar less.

The big drain, which is the chief source of the foul smell, is being cleaned up on the eastern gate of the Taj Mahal from where Trump and his team will enter the monument. Trees along the route have been cut and spruced up to allow the clear visibility to security agents. A half a dozen American teams have already checked and verified the data collected by the district administration. Nothing is being left to chance.

It will be a memorable visit in many respects, say tourism industry captains. Tourism should get a big boost with this visit, they hoped.

The state of preparedness and competence of the local administration and the security apparatus will also be tested, they said.