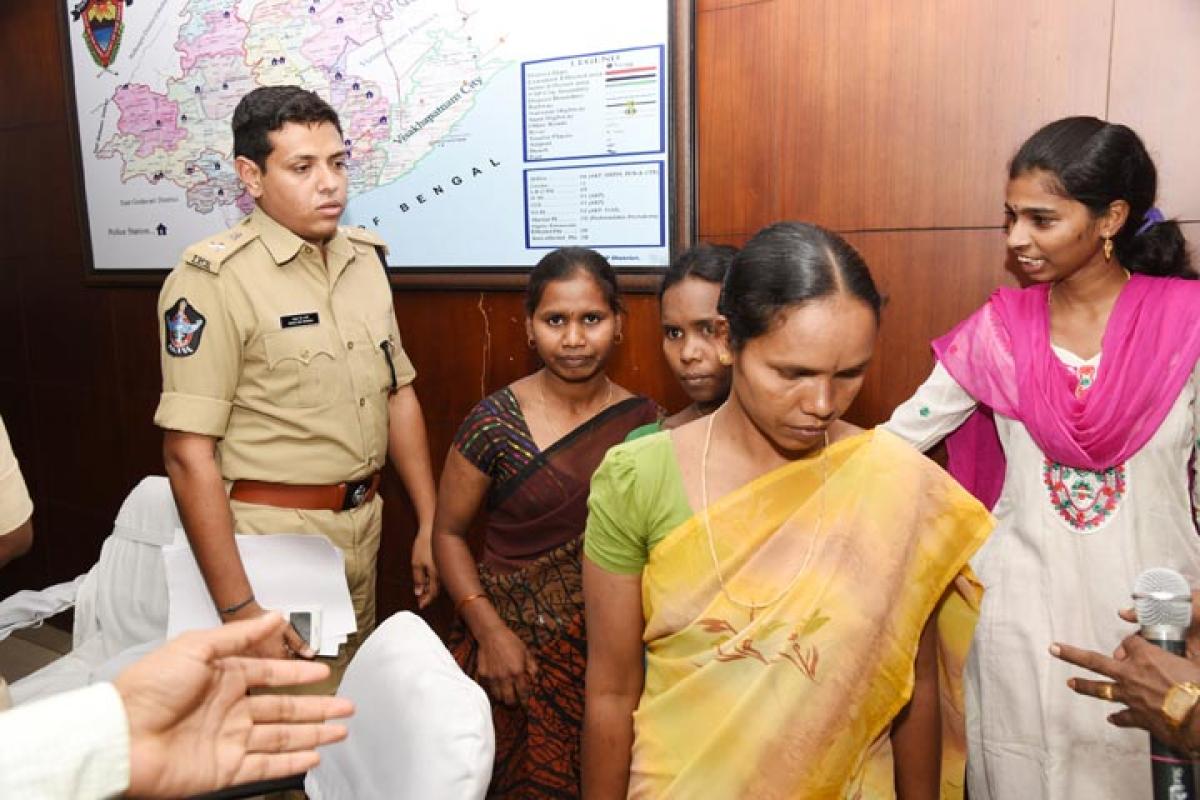 Three women Maoists, one of them a dalam  commander carrying a cash reward of Rs 4 lakh on her head and known to have involved in over 30 offences surrendered before the Visakha Rural superintendent of police here on Wednesday.

Visakhapatnam: Three women Maoists, one of them a dalam commander carrying a cash reward of Rs 4 lakh on her head and known to have involved in over 30 offences surrendered before the Visakha Rural superintendent of police here on Wednesday.

Accused of carrying out several violent attacks, the party activists expressed displeasure over the functioning of the top Maoist leadership

All the three women told press persons that differences with the leadership and ill health had forced them to surrender. The surrendered rebels were identified as: K Lakshmi alias Saritha (29), commander of the Central Region command of the Andhra-Odisha Border, area committee member B Ramulamma alias Bharati, and Dalam member T Thummu alias Vijaya.

The women said they had joined the Maoist organisation after getting attracted by its ideology, but over the years they had realised that the top leaders were deviating from the original ideology. Work pressure due to decrease in the cadre, leadership crisis, poor medical facility made them to quit the organisation.

Saritha said the activists were fed up with the leadership of senior leader, due to his arrogance and lack of leadership qualities. This might lead to more surrenders in the near future, she said. Superintendent of Police (Visakha Rural) Rahul Dev Sharma told press persons that Sairtha, a native of Shyamagedda area under GK Veedhi mandal in Vizag Agency joined the Maoist movement in 2000 and was involved in over 30 incidents of violence, including murder and attack on police stations.

Some of the cases were also registered against her in police stations in Odisha and Chhattisgarh states. Saritha was promoted as the first woman commander of the Central Region Command of AOB and she was responsible for training the cadre, he added.

Ramulamma, native of Labadampalle of GK Veedhi mandal in the Agency, was with the outfit for the past two decades and carried a reward of Rs 4 lakh. She was also involved in 34 offences, including attack on police stations and gun battle with special police.

Thummu is a native of Thartal village and was associated with the Maoist movement since 2008. She carried a
reward of Rs 1 lakh, he added.