Call to rededicate for AP development Our 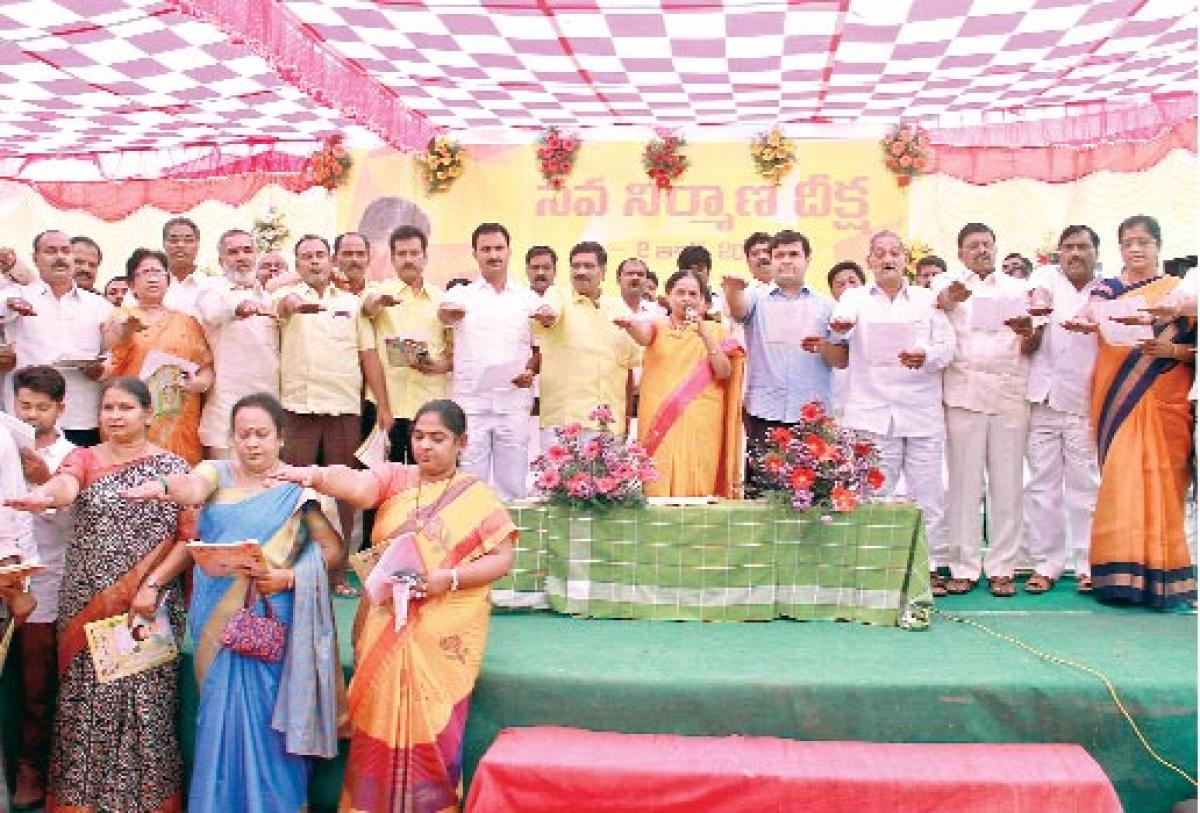 They also vowed to work hard with a patriotic spirit, commitment and social responsibility to take the State to 3rd position in the country by 2022, number one position in 2029 and by 2050 as a most developed State in the world.

Tirupati: Following the State government’s direction, Nava Nirmana Deeksha was observed in various departments including revenue, police, tourism, SPDCL, SETWIN and in Municipal Corporation of Tirupati (MCT) here on Thursday.
Marking the occasion, the government staff took a pledge of dedicating themselves for the reconstruction of Swarnandhra Pradesh and enable it to overcome the loss it suffered due to corrupt and conspiratorial politics.

They also vowed to work hard with a patriotic spirit, commitment and social responsibility to take the State to 3rd position in the country by 2022, number one position in 2029 and by 2050 as a most developed State in the world.

Local MLA M Suguna along with a host of local TDP leaders including G Narasimha Yadav, B Sridhar Varma, D Bhaskar, R Sudharani as well as corporation officials including commissioner V Vinay Chand vowed to work with commitment to make Andhra Pradesh a happy and healthy State with free of corruption and social inequalitie

On the occasion, Chief Minister N Chandrababu Naidu’s Nava Nirmana Deeksha address (at Vijayawada) was telecasted adding tempo to the Deeksha observance in which no other party representatives except TDP were seen, though it was an official government function.

The MCT organised Nava Nirmana Deeksha in the busy junction where the stage was set up across the road. It has caused lot of inconvenience to the public for over three hours in the busy morning hours. With the meeting occupying one lane of the road, vehicular traffic went on a snail’s pace on the busy road.

However, ruling TDP leaders said that first it was decided to hold the event in Indira Maidanam but later changed to the municipal office junction area for sentimental reason as it was in the same place the two month-long relay hunger strike during Samaikyandhra movement was conducted to remember in fitting manner the sacrifice made by the people to keep the State united.

Sub-Collector Kritika Batra along with the staff took the pledge reaffirming that they would work with dedication for the all round development of the State.

While in Nagari and Puttur, the Deeksha ceremony was held on a low profile manner with MLA R Roja and senior TDP leader and MLC G Muddu Krishnama Naidu from the area were absent from observing the ceremony.

Local officials along with TDP leaders observed the
Deeksha.

SVU Vice-Chancellor A Damodaram, principals, administrative deans, teaching and non-teaching staff took part in the ceremony and took the pledge in a function held in Senate Hall of the university.