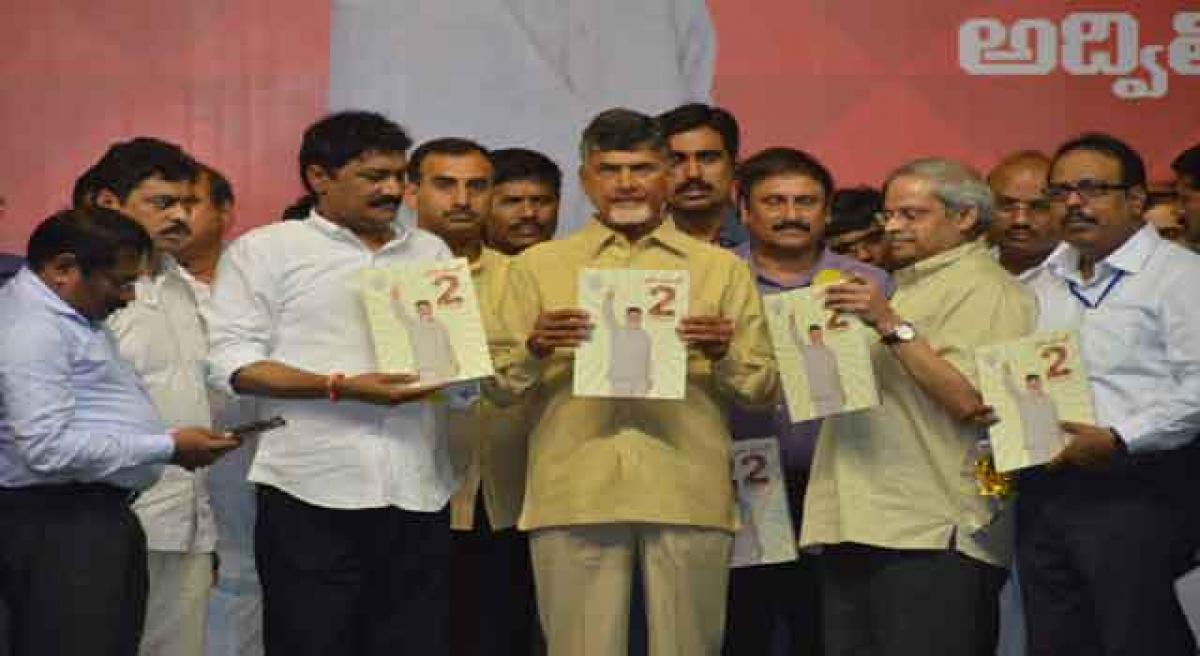 ​Kadapa: Chief Minister N Chandrababu Naidu delved on developmental efforts of the government to transform the State on the power front. He declared that the State now gets power round-the-clock by dint of the government’s efforts.

He dedicated success of the government on the energy front, which is crucial to State’s development, to the people. He said many areas including remote hamlets hitherto had no power are under light now. The State could successfully overcome the power shortage to a large extent.

Addressing Maha Sankalpa Yatra here on Thursday, he said the people of the State took a noble and firm resolve for development of AP. He administered ‘Maha Sankalpa’ oath to the people. Launching a scathing attack on the TRS, he charged the TRS with hatching conspiracies at the time of the State’s bifurcation and maintained that the TDP tried to protect the State’s interests at that juncture.

Sitting in a dark room, some people bifurcated the united AP unjustly to the detriment of residuary Andhra Pradesh. At the time of the bifurcation, K Chandrashekar Rao announced TRS will merge with Congress, he said adding that it is everybody’s knowledge what happened later. He blamed KCR for conveniently changing the tack once the Statehood to Telangana was achieved.

Around the same time, Jaganmohan Reddy was released from jail to field him against the TDP, he said the Congress faced bitter experience in spite of hatching several conspiracies to derive political mileage. The voters had taught a bitter lesson to the Congress ruling out any scope for recovery in future, he said.

He said that the State government has been exhorting the Centre for implementation of assurances issued at the time of the bifurcation. Referring to development of Hyderabad, he said the city was developed in a span of nine years into a knowledge city and putting it on the world map.

Referring to painful comments, made in certain quarters, of hitting the Chief Minister with a broomstick, he appealed to public of Kadapa to understand how much pain such comments cause him. Is it proper to make such utterances against him at a time when he is busy developing the State using modern technology, he asked.

You should visualise how bad you would feel when someone threatens to hit you with a slipper, he questioned. Taking a dig at Y S Jagan indirectly, the Chief Minister attributed the Kadapa district getting bad name to him. The State in general and the district in particular were totally destroyed.

He was shooting his mouth off, while I was trying to salvage the image of the State and also that of Kadapa district. Minister for Municipal Administration P Narayana, AP NGOs’ Association leader Ashok Babu and others took part in the meeting.