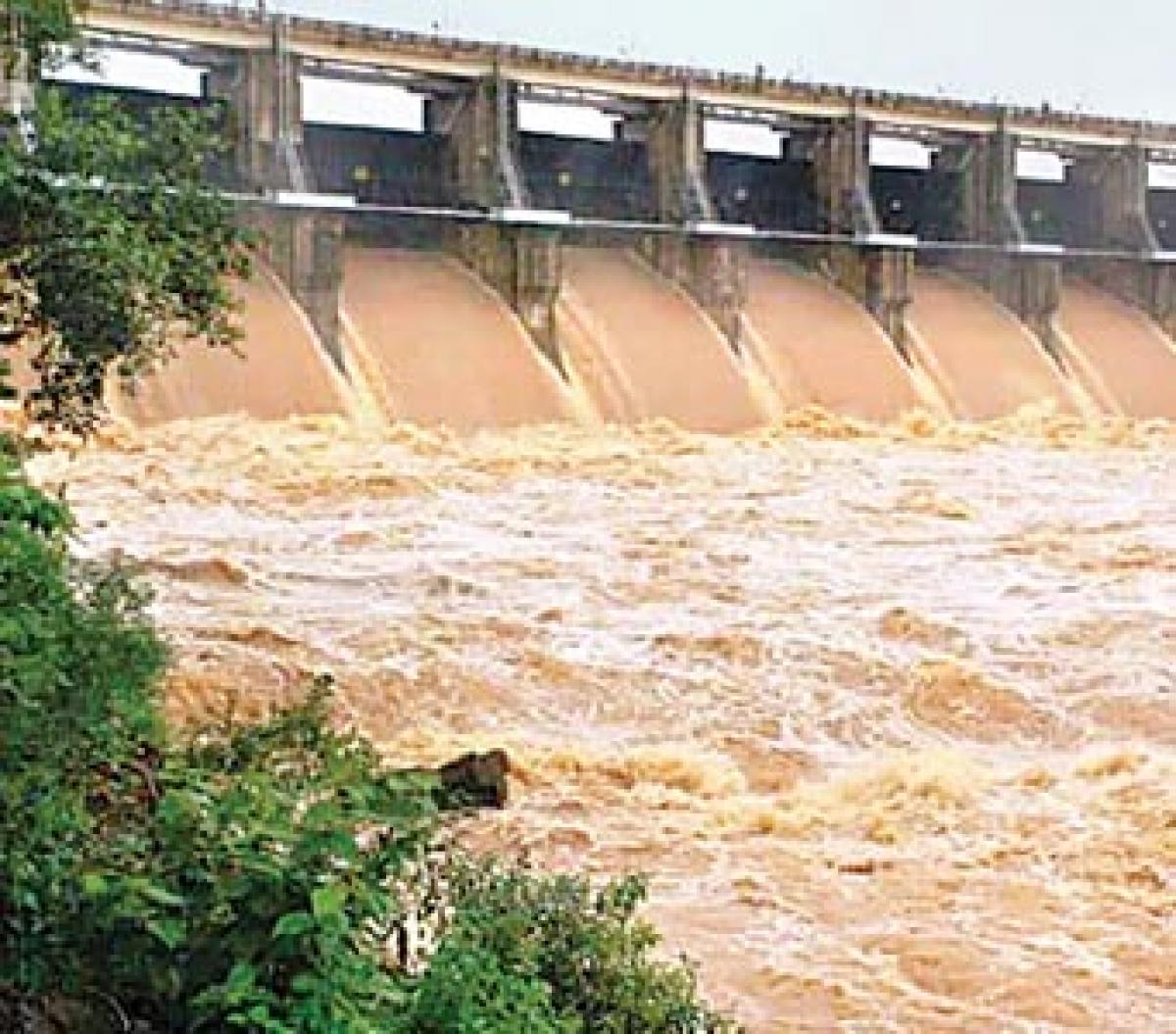 has been disrupted. As a result, road connectivity to at least 40 villages has been disrupted.With Kinnerasani project receiving abundant inflows, the dam officials lifted six of the 12 gates to the height of six feet and released 35,000 cusecs of floodwaters.

Hyderabad: Heavy rains lashed various parts of Andhra Pradesh and Telangana during the last 24 hours. While the rains led to inundation of several low-lying areas in East and West Godavari districts of Andhra Pradesh, all the streams and rivulets in Khammam district were overflowing with rains and road connectivity to at least 40 villages

has been disrupted. As a result, road connectivity to at least 40 villages has been disrupted.With Kinnerasani project receiving abundant inflows, the dam officials lifted six of the 12 gates to the height of six feet and released 35,000 cusecs of floodwaters.

It may be mentioned here that current water level in the dam is 401 feet while the full reservoir level is 407 feet.
The temple precincts of Bhadrachalam remained water logged with the heavy downpour.

Devotees visiting Sri Sita Ramachandra Swamy temple had a tough time as they had to wade through the water-logged Mada streets.

Meanwhile, the Godavari river level at Bhadrachalam rose to 16.8 feet by 7.30 pm, according to CWC officials. Albeit, there was no immediate danger, the district administration alerted the sectorial officials with heavy to very heavy rains forecast for the next 24 hours.

According to reports from Kakinada, water got stagnated in several colonies and suburb areas and motorists had to wade through almost knee-deep water. Baljicheruvu Centre, Suryanarayanapuram area, Ragampeta, Anamma Ghati Area, Sambamurty Nagar Dairy farm centre, Jagannaickpur over bridge and other areas were flooded with rainwater.

The area in front of the District Collectorate looked like a water pond near Andhra Bank, NIC and SPTI offices making it difficult for staff and visitors.

In Eluru of West Godavari district, normal life came to a standstill in agency mandals as heavy rains lashed the district. About 80 villages in Velairpadu, Buttayagudem, Polavaram agency mandals were cut off from the outer world, as the rivulets are in spate.

Kammarigudem village in Velairpadu mandal was marooned as the Peddavagu project were gates lifted following heavy inflow. The ITDA officials shifted the villagers to safe places from the village.

Flood water has entered in Patapuchirala village in Velairpdu mandal. The officials evacuated the villagers to safer places. About 56 villages were cut off from other areas due to floods.