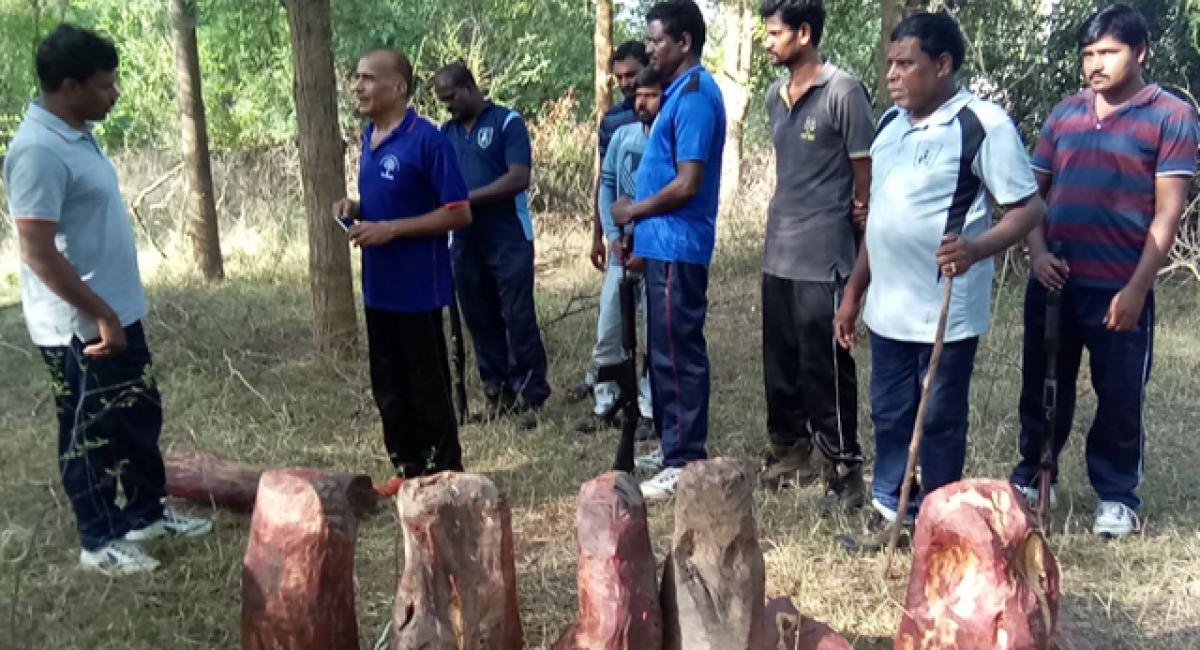 Tirupati: It is interesting to know that the smugglers resorting to new trends to hoodwink the authorities for continuing the illegal trade of smuggling red sanders logs to other states.

On Friday morning, the Red Sanders Anti-Smuggling Task Force (RSASTF) personnel were surprised to find out a secret chamber in a Tata vehicle with empty crates, during inspection of vehicles at Balapalli on Tirupati-Kadapa road. The search of the secret chamber led to recovery of 8 red sanders logs being transported to Hospet in Karnataka.

Briefing newsmen on the details of the operation, Task Force IG M Kantha Rao said that the task force men grew suspicious on finding empty plastic crates used to carry vegetables or fruits, in the vehicle. The close examination of the vehicle revealed welding marks atop which ultimately led them into the secret chamber covered with tin sheet.

The vehicle was partitioned into two and the plastic crates were placed in the outside part to look as if the vehicle meant for vegetables transport. Kantha Rao said three persons in the vehicle including Harinath of Pagadalapalli near Railway Kodur, Eswar and Ranganath of Sanathnagar also in Railway Kodur were arrested and investigation is on.

Reminding that earlier also the smuggler found illegally transporting red sanders logs in the vehicles with stickers indicating as police, press, army, ambulance and also rebuilt as to appear as Heritage and TVS Lucas reputed firm vehicles, he said the secret chamber in vehicle is seems to the latest trend the smugglers opted to bypass scrutiny.

The task force identified as many as 200 loading points in the sprawling Seshachalam Hills forest spread over 14 lakh hectares in the two districts of Kadapa and Chittoor, he said informing all the points are under surveillance to check smuggling.