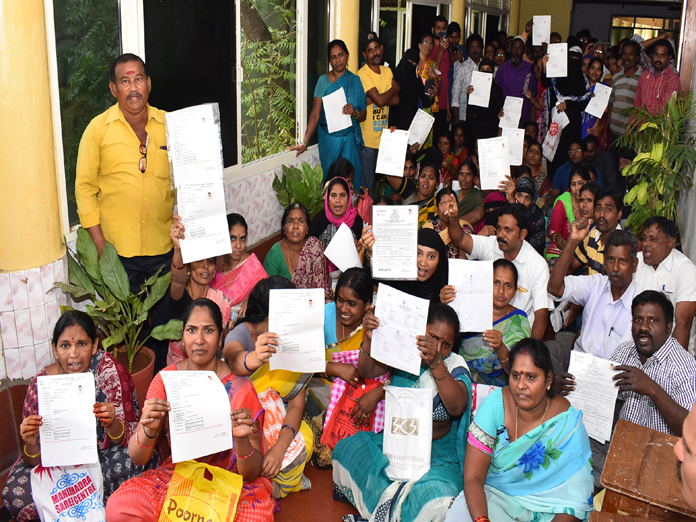 Vijayawada: Tense situation prevailed at Vijayawada Municipal Corporation office when hundreds of PMAY housing scheme beneficiaries staged a protest demonstration at the chamber of VMC Commissioner J Nivas demanding justice in the allocation of houses for them on Monday.

It may be noted that the VMC has sanctioned 8,285 houses to beneficiaries on January 18 at IGMC stadium. Before the sanction of houses, the VMC had collected deposits in the form of DDs from 12,000 applicants.

However, due to lack of enough land, the VMC unable to construct 12,000 houses. The Andhra Pradesh Township and Infrastructure Development Corporation is constructing 8,285 houses only at Jakkampudi. Over 3,750 applicants are unlikely to get houses even after paying demand drafts.

They are demanding that the VMC should construct and allot houses as promised. Though APTIDCO is constructing the houses, the VMC has taken the responsibility of selecting the beneficiaries.

In this backdrop, the applicants are expressing their dissent on the VMC. The beneficiaries further alleged that the VMC officials have received demand drafts from 12,000 beneficiaries to allocate houses and had allocated only 8,823 houses deceiving the poor homeless people. They demanded that the beneficiaries not leave the premises unless the officials did not give clarity on the issue.

CPM State leader Ch Babu Rao along with others joined the protest in support of the beneficiaries of PMAY housing scheme. They found fault with the officials for allocating houses as they desired even after payment was done according to the instructions given by the VMC.

They said that after receiving the DDs for allocation of 430 sft house, most beneficiaries were allocated small houses. They demanded the VMC officials to allocate houses as promised earlier and do the same before the election notification is announced.