Andhra Pradesh has the capacity to produce 50 lakh tonnes salt per year but producing less then 50,000 tonnes annually

Most of the countries in the world are actively engaged in salt cultivation and India occupies an envious third position, next only to China and USA. 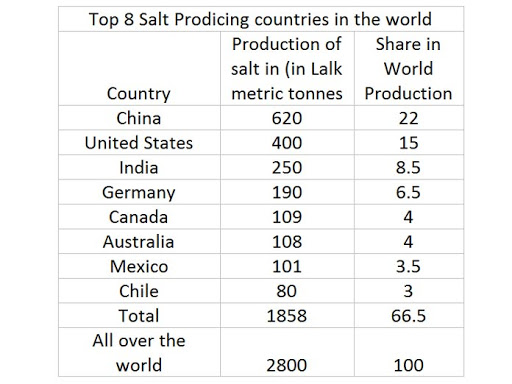 With 245 lakh metric tonnes of salt production, India contributes 8% of the global share in the slat production. Indian salt is penetrating globally thanks to its premier quality and improved infrastructural facilities. In India 60 lack tonnes salt is using for human consumption and 113 lakh tons is for industrial consumption and exporting about 50 lakh tonnes annually.

Major salt producing states in India are Gujart (78%), Tamil Nadu (11%), Rajastan(8%), Andhra Pradesh (1%), Maharastra (1%) and Orisaa (1%). In India 91% salt production under private sector, 8% cooperative sector and only 1% under public sector. With 74 tonnes of salt production per acre in Gujarat is the top producer of salt in India, with an average 380 kgs of salt produced per worker. Although Andhra Pradesh possesses the second largest coastal line in India and stand next to Gujarat, it remained in the 4th place with an average salt yield of 14.6 tonnes per acre with an average contribution of 63.6 kgs per worker. The major problem is lack of proper power supply to the fields and less skill to the workers.

Naupada in the Santa Bommali mandal of Northern Andhra Pradesh district of Srikakulam is considered as the ‘Salt Bowl of AP’, followed Naupada, Moolapeta and Bhavanapadu areas of the district, along with by Kakinada and Krishnapatnam. AP cultivaatd 56,000 tonnes salt in 3000 acres. With lowest productivity per acre, AP is lagging behind Gujarat and Rajasthan, though it has the second largest coastal line (970km) in the entire country.

Although the salt cultivation is on rise in AP, it is not at par with Gujarat; 25000 acres of land is used for salt production in the Andhra Pradesh with an investment of Rs. 40000 per acre. Due to power shortage, the farmers are forced to used diesel motors to pump salt water in the field and poor transport facilities is also adding to the production cost. Farmers are unable to get at least Rs. 100 for 50 kg of salt due to competition from the MNCs. As a result, they are earning less than Rs.70, 000 per acre. Unable to earn even Rs. 10000 per month, the salt farmers of AP are migrating to the other fields. The area under salt cultivation has also declined from 10000 acres to 2500 acres in Srikakulam. While Gujarat, Tamil Nadu and Rajasthan are contributing 96% of the salt, AP shares the remaining 2% of salt production along with Orissa, Maharashtra and Goa. 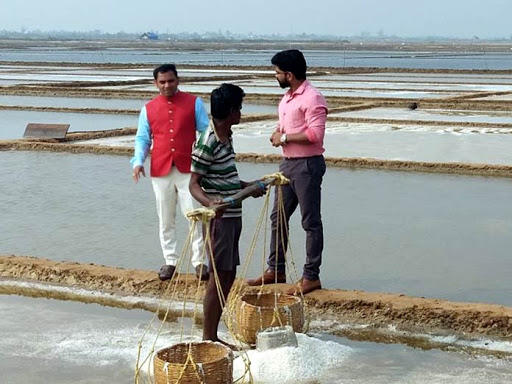 While the salt farmer is getting less than 50 paisa per Kg out of salt cultivation, the branded salt manufacturer is selling it at the rate Rs. 25 in the retail market. Rs. 24.50 is lost in the hands of middle men in this process and the private companies are not passing the benefits to the farmer. 90% of the salt production in India is in the hands of private operators. While 8% salt production is under the cooperative societies, the government holds only 2% control. The private companies with huge investments and modern machinery could influence the market price, threatening the livelihood of the poor farmer.

The state of Andhra Pradesh needs a serious retrospection of its salt policy to increase the productivity and per capita income of the salt producer by bringing more area under cultivation Labor intensified salt production must be mechanized and the local youth and unemployed should be thoroughly trained to meet the market demands. The government must offer subsidized loans to the locals to farm salt under co-operative sector and should come to their rescue in foxing reasonable market price. 50,000 jobs can be created in Andhra Pradesh through salt cultivation with per capital income of 1.2 lakhs per worker. Salt processing unit can be established with less than 25 lakhs initial investment. Andhra Pradesh Government should promote salt processing zones with provision to export 50% in Special Economic Zone like Gujarat, also encourage unemployed youth to establish units with subsidiaries. China is the largest importer of the Indian salt followed by the Japan, Korea, and the Middle East.

Like MSTC, the government should set up an independent platform to trade salt, where the farmers can directly sell it to the buyers online without the middle men so that the maximum benefits can be extended to the real beneficiary. Andhra Pradesh has so far achieved several mile stones in the sase of doing business and extending support to the private and foreign investors. The same attitude should be extended to the local salt manufacturers of Uttrandhra districts that own more than 350 Km of sea shores. The government must announce a favorable salt policy for the local producers that include subsidized investment, liberal repayment, marketing, training the locals to meet the international demands and the online salt portal that enable the farmers to directly sell his product.