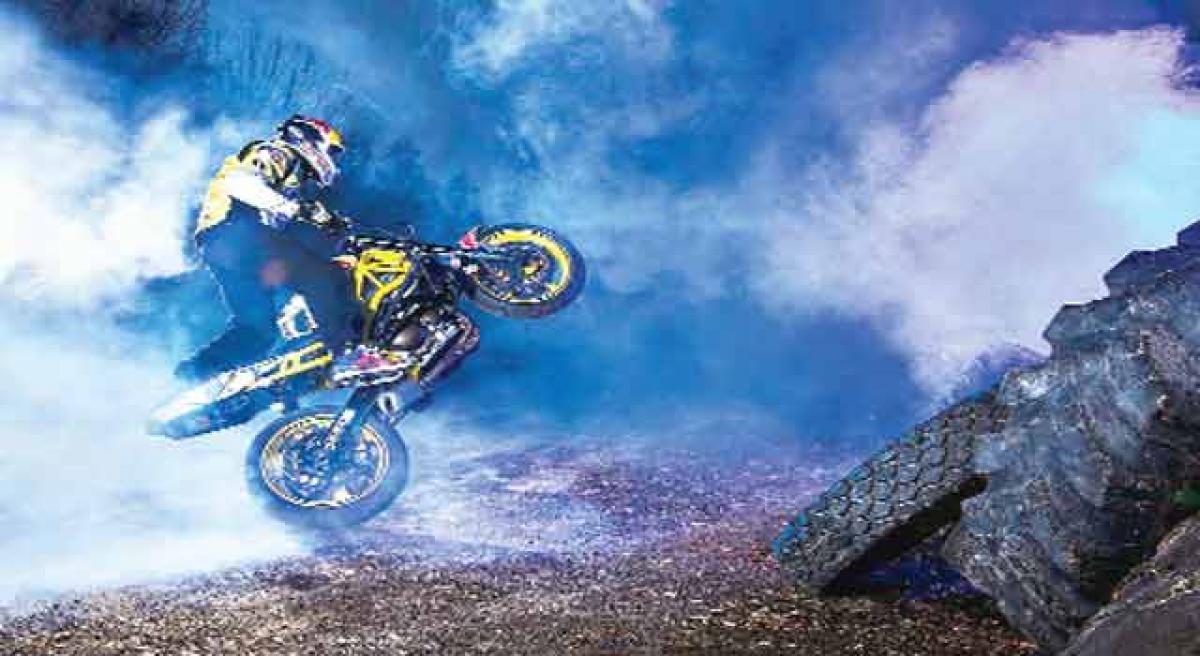 Aras Gibieza is a Lithuania-based Red Bull motorcycle stunt biker. All of 26 now, Aras has been doing breathtaking stunts for 16 years now. His passion for bike stunts started when his grandfather gifted him his first bike – Suzuki RG50 – when he was just 10 years old.

Aras Gibieza is a Lithuania-based Red Bull motorcycle stunt biker. All of 26 now, Aras has been doing breathtaking stunts for 16 years now. His passion for bike stunts started when his grandfather gifted him his first bike – Suzuki RG50 – when he was just 10 years old.

He soon discovered that speed and stunts excited him and after several weeks he started performing stunts like riding on the rear wheel and dragging his feet the balance of the bike, etc and these were the stepping stones towards becoming a professional freestyle bike stuntman.

Aras Gibieza, one of the world’s most popular young stunt riders in a candid interview speaks about his passion for stunts and his career

Aras bought his first superbike – Yahama R6 – at the age of 16 and started participating in various racing competitions and he was doing well, however, he felt that racing was not his calling and after some time he went back to his childhood passion.

“I’m living my dream life and that makes me extremely happy because I get to do what I love, travelling around the world and performing stunts on the bike,” the daredevil biker shares.

When asked about choosing professional racing rather than doing freestyle stunts, he says: “Stunt biking is more attractive motorsport as it is action packed! I’ve always wanted to break all biking limits and stunt biking is the best way to achieve this.”

Performing stunts is a gruelling task and one has to undergo a strict training regimen. “I have been on a special training routine, which involves cardio and stretching accompanied by a lot of strength training exercises.

Along with working out hard, I have been very particular about my diet and nutrition. I practice for at least 5-6 hours on the bike every day,” he informs.

He is known for doing nearly impossible stunts on the bike and one of his signature moves is the “Bunny Hops”. “The Bunny hop is a trick that originates from BMX flatland but not too many people can perform it on a big bike.

I focussed for a long time on tricks that can destroy the limits of the heavy bike and took them up to the next level; the level that has no limits,” he says.

“My entire routine is precise and focussed on ensuring maximum safety and some hard stunts. I always think about my next trick and execution based on the new stunts I have practised and the ones I am good at,” he adds.

Aras says that his teammate Red Bull athlete Chris Pfeiffer is his inspiration. Recalling one of the horrific moments in his career he shares, “Once I had a bad crash just one week before the European Stunt Riding Competition and I broke two bones of my leg.

Despite that, I participated in the competition with a broken foot and went on to win first place.”Speaking of his favourite bikes he says, “I have a few favourite bikes. At home, it’s my Kawasaki Ninja and recently I have fallen in love with my new toy, the specially built for the Suzuki Freestyle Gixxer tour – the Suzuki GSX1000S.”

On a signing note, Aras says, “I intend to continue training hard, breaking stunt biking limits and performing around the world. I also want to keep winning at competitions.”