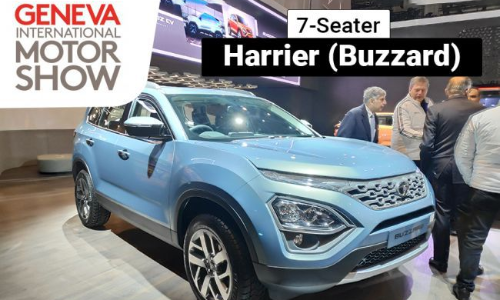 Will go on sale in India by the end of this year and is expected to get a different name (will not be called Buzzard) Gets significantly different...

Tata Motors has finally revealed the 7-seat Harrier along with the Altroz at the Geneva Motor Show 2019. The SUV showcased carried the Buzzard - Geneva Edition nameplate, but Tata says it won’t be called the Buzzard when it launches in India later this year.

The Buzzard - Geneva Edition not only shares the OMEGA-ARC platform with the Harrier, but shares its styling as well, at least till the C-pillar. Beyond which, it has been completely redesigned. The Buzzard’s roof doesn’t slope down as sharply as the Harrier’s and it’s also 63mm longer. It gets a larger rear quarter glass and also features bigger alloys and roof rails, which are not available on the Harrier. It has also been showcased in a light blue colour which is not on offer on the Harrier at the moment.

The Buzzard’s tailgate is relatively flatter in comparison to that of the Harrier’s and it has a more upright stance too. It gets a bigger rear windscreen, completely reworked tailgate, tweaked rear bumper and updated tail lamps. On the inside, the Buzzard looks identical to the Harrier except for the addition of the third row seats. The last row features 50:50 split seats and both get adjustable headrests.

Under the hood, the Buzzard is likely to get the same 2.0-litre Fiat-sourced diesel engine that also powers the Harrier. However, on the seven-seat version, Tata is expected to tune the engine to make more power, probably similar to that of the Jeep Compass where this engine makes 173PS of power and 350Nm of peak torque. The Compass generates 33PS more than the Harrier, but the torque output is identical at 350Nm. Like the Harrier, the Buzzard also gets a 6-speed manual transmission. Tata is likely to offer the 7-seat Harrier with a 6-speed automatic transmission too.

The Buzzard or the 7-seat Tata Harrier will take on the likes of the Mahindra XUV500, Tata Hexa and the 7-seater version of the MG Hector when it is launched later in 2019. It is expected to be priced at a premium over the Harrier, which is priced from Rs 12.69 lakh to Rs 16.25 lakh (ex-showroom Delhi).