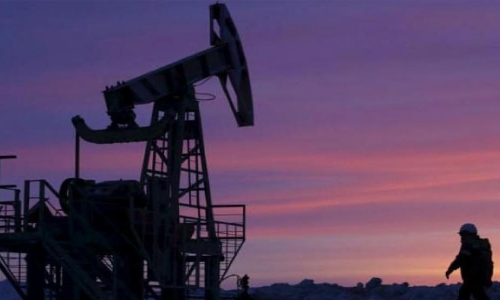 Oil prices fell on Monday, extending a steep decline in the previous session, as the market eyed an increase in output from the world\'s three top crude producers, Russia, the United States and Saudi Arabia.

SINGAPORE: Oil prices fell on Monday, extending a steep decline in the previous session, as the market eyed an increase in output from the world's three top crude producers, Russia, the United States and Saudi Arabia.

Brent and WTI have fallen by 6.4 per cent and nearly 9 per cent respectively from peaks reached earlier in May. In China, Shanghai crude oil futures tumbled by 4.5 per cent to 459 yuan ($71.83) per barrel.

The Organization of the Petroleum Exporting Countries (OPEC), as well as top producer but non-OPEC member Russia, started withholding supplies in 2017 to tighten the market and prop up prices, which in 2016 fell to a more than a decade low of under $30 per barrel.
But prices have soared since the start of the cuts, with Brent breaking through $80 per barrel earlier in May, triggering consumer concerns that high prices would crimp economic growth and stoke inflation.

"The pace of the recent rise in oil prices has sparked a debate among investors on whether this poses downside risks to global growth," Chetan Ahya, Chief Economist at US bank Morgan Stanley wrote over the weekend in a note.

"Crude oil prices collapsed ... after reports emerged that Saudi Arabia and Russia had agreed to increase crude oil production in the second-half of the year to make up for losses elsewhere under the production cut agreement," ANZ bank said on Monday.

Meanwhile, surging US crude production also showed no sign of abating as drillers continue to expand their search for new oil fields to exploit.

US energy companies added 15 rigs looking for new oil in the week ending May 25, bringing the rig-count to 859, the highest level since 2015, in a strong indicator that American crude production will continue to rise.

US crude production has already surged by more than 27 per cent in the last two years, to 10.73 million barrels per day (bpd), bringing its output ever closer to that of Russia, which pumps around 11 million bpd.