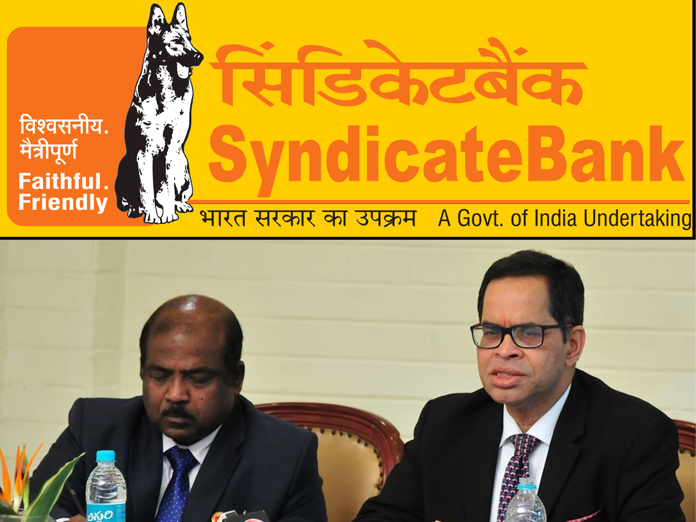 One of the oldest and largest public sector banks (PSBs) of the country, Syndicate Bank has over 4,000 branches.

Though the bank has its origins in Karnataka, the Manipal-based bank now has presence across India, with 35,000 employees and a total business of over Rs 4.8 lakh crore, including Rs 2.5 lakh crore deposits.

“We are in a consolidation phase now. So, we are not very keen to expand in a big way. I want to build the bank rather than expanding,” Mrutyunjay Mahapatra, Managing Director and Chief Executive Officer, Syndicate Bank, tells
P Madhusudhan Reddy.

Which segments are driving your growth?

We have a reduced portfolio of corporate banking. It has come down from 50 per cent to 45 per cent. We are now focusing on retail, MSME and agriculture. Our growth is currently being driven by housing loans and MSME loans. We will turn profitable in two quarters.

All the banks are moving away from corporate lending and instead focusing retail and MSME (micro, small and medium enterprises) loans. As consequence, NPA (non-performing asset) levels in retail and MSME sectors are also rising. How do you plan to address this?

Every bank has got little problems in corporate lending. As you rightly say, banks are moving into retail sector. Risk management in retail sector is better because it gets distributed.

However, the problem with retail lending is that it rides on technology and differentiation. Unless a bank offers unique products that meet customer’s expectations and deploys right technology, it’s difficult to attract customers.

Are the public sector banks equipped with such a technology on par with private banks?

Contrary to general perception, public sector banks (PSBs) are better equipped when it comes to technology. It’s true that private banks make lots of public announcements about their services.

But PSBs are far more tech savvy. For instance, SBI spends four to five times of what the biggest private bank spends on technology.

What kind of growth Syndicate Bank is clocking in retail space?

We clocked about 6% growth since March this fiscal. We expect to grow another 4-5 per cent by end of the current financial year.

In the MSME space, our growth remained flat till now. We are eyeing 4 to 5 per cent growth this fiscal.

The RBI recently allowed restructuring of MSME loans up to Rs 25 crore. What impact will that have on your NPA portfolio?

NPAs in MSME sector will come down if loans are restructured. In a way, this offers relief to MSME sector. In the MSME sector, the gross NPAs across the sector are 18-20 per cent.

For Syndicate Bank, it’s 16-18 per cent. The net NPAs are about six per cent. Lenders will keep on struggling to keep MSME NPAs under control.

MSME entrepreneurs and associations are demanding the scrapping of SARFAESI Act, saying it’s too harsh and banks are auctioning properties pledged by promoters to reduce bad loans. What do you have to say on this?

I don’t know what is too harsh. SARFAESI Act is meant for properties which have been mortgaged so that banks could take their possession and sell them.

If they say it’s harsh, then banks will not be able to recover their loans as other legal systems take longer time.

MSME entrepreneurs says banks are in a hurry to auction properties to reduce their NPAs. Will that not discourage new entrepreneurs?

Earlier, banks were waiting. That’s why they (banks) became sick. MSME sector is a low-capital structure.

So, they don’t have deep pockets to sustain. We need to work with RBI and others on this. If RBI allows us to wait for longer period, we will. Based on NPA pressures, bankers are going to recover.

The talk on the street is that banks are getting more income through fees than interest on loans. Why banks are relying on fees and penalties to improve their bottom lines?

Fee income is a capital-nil income. That means there is no requirement of capital. We have to invest just on infrastructure and things like that. Fee income is considered by stock market as an efficiency parameter.

There was uproar because there are different yardsticks by which public judge public and private banks. No one will notice or question if a private bank takes three-times of what a public bank charges. PSBs always have this disadvantage. It’s a fact of life.

Will such fees and penalties continue to go up?

Banks are collecting fee for rendering a service. It will require periodic adjustments. Services are two types – basic services and others. Probably, there will be more uproar if we charge passbook fee. If we increase fee on lockers, it may not create any problem. We will have to make distinction and differentiation while levying charges.

It is said that people have lost confidence in banking system post demonetisation. They are investing their money in other areas like real estate instead of depositing in banks. What do you have to say on this?

People will have to give account of their money even if they invest in real estate. They can’t escape. Formalisation is a good sign of economy.

Was there any dip in bank deposits post demonetisation?

People have taken away 30 per cent of deposits at that time. The remaining 60 per cent are still with the banks. Moreover, new deposits have increased. Our growth in new deposits is 6 per cent while banking sector average growth is 9 per cent.

What are your plans for network expansion?

We are in a consolidation phase. So, we are not very keen on expanding in a big way. I want to make the bank stronger rather than expanding. We may open around 100 new branches a year, but no aggressive expansion plans.

Recently, we have seen merger of two banks with Bank of Baroda. In this context, will Syndicate Bank remain a standalone bank in the long run or do you see it being merged with another bank?

It will continue to remain a standalone bank. We may get some other bank (if there is any merger)

What is your view on the argument that there should not be more than four to five public sector banks?

That’s one view. We will have to see whether there should be four to five large banks or more. Syndicate Bank has 4,000 branches and 35,000 employees. By western standards, it’s very large bank. That way, we are already large.

What is your take on the farm loan waivers currently underway in the country?

Loan waivers create a bad credit culture. As result, banks will become shy of offering agriculture loans at proper time. In long term, it harms the farming community because there can’t be an endless process of debt waiver.

These are great schemes which will benefit farmers more. That’s common consensus in the banking sector.

I remember reading a report that Syndicate Bank's NPAs in agriculture went up four-fold in last five years. What is the main reason for it?