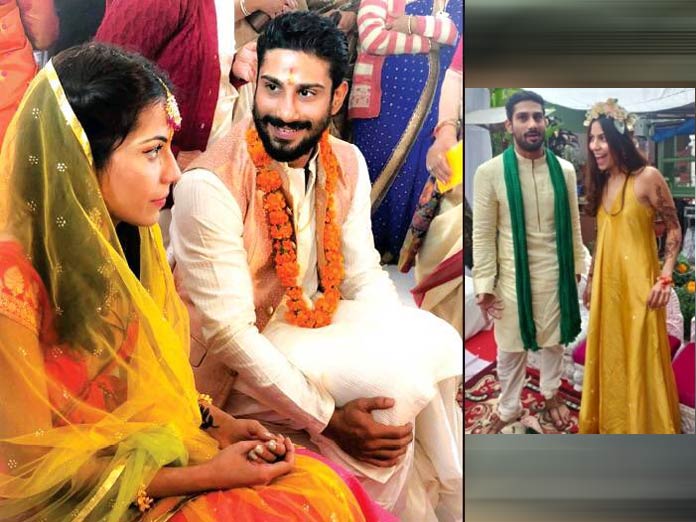 After a yearlong engagement, finally, actor Prateik Babbar and his girlfriend Sanya Sagar got married yesterday at a private wedding for friends and...

After a year-long engagement, finally, actor Prateik Babbar and his girlfriend Sanya Sagar got married yesterday at a private wedding for friends and family in Lucknow. The haldi and mehendi ceremonies were held on Tuesday.

The couple started their wedding festivities on Tuesday with Haldi and Mehendi ceremony at Brides residence in Lucknow. The couple hosted a late sangeet party for friends and family.

The bride-to-be shared videos from the mehendi ceremony on her Instagram Story while many fan clubs posted images of Sanya and Prateik from the pre-wedding festivities.

Sanya Sagar was dressed in a yellow outfit accessorised with flowers in her hair while Prateik was dressed in kurta pyjama and a green stole. The couple beamed and laughed as they participated in the ceremonies with their relatives and guests.

Prateik Babbar and Sanya Sagar have known each other for eight years and the actor proposed in 2017.

Prateik Babbar is the son of Smita Patil and Raj Babbar. Actors Arya and Juhi Babbar (born to Nadira and Raj Babbar) are his half-siblings.

Prateik debuted in Bollywood with 2008 film Jaane Tu... Ya Jaane Na and went on to star in films like Dhobi Ghaat, Aarakshan and Ekk Deewana Tha. He took a break from movies in 2015 and returned to the big screen with Baaghi 2 last year. He also starred in Mulk and Mitron in 2018.