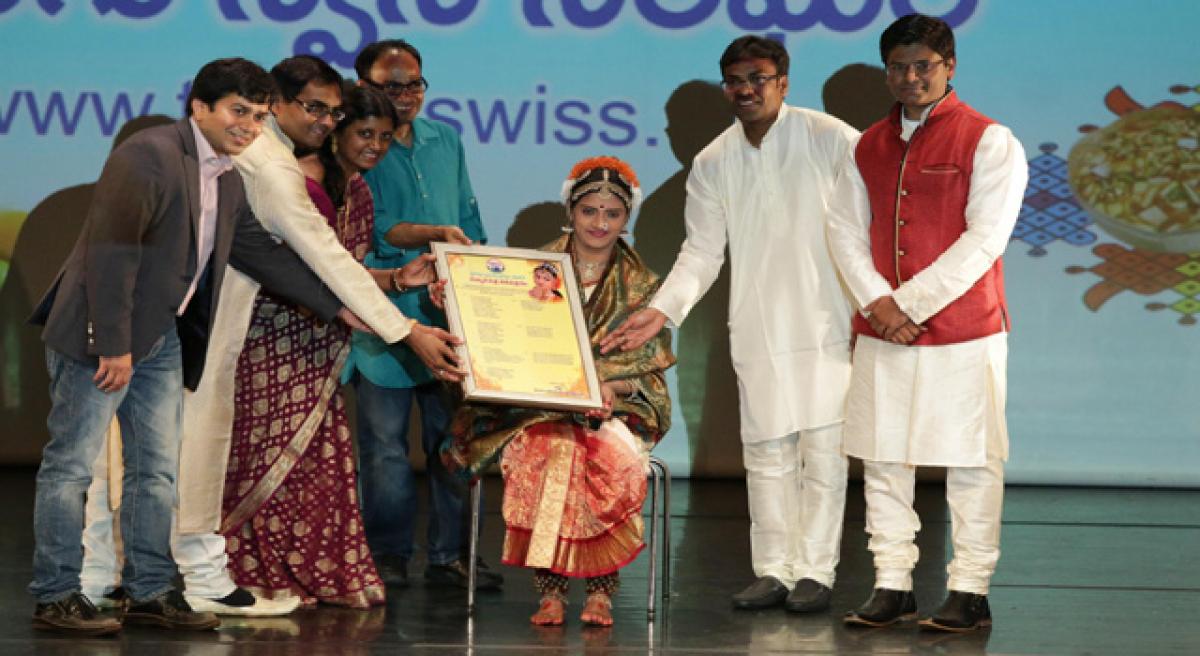 Vinjamuri Raga Sudha, an Indian classical dancer created a world record in April this year by becoming the first artiste to have staged multiple performances on different occasions in both the Houses of British Parliament.

Vinjamuri Raga Sudha, an Indian classical dancer created a world record in April this year by becoming the first artiste to have staged multiple performances on different occasions in both the Houses of British Parliament. A Fellow of Royal Society of Arts, she performed Bharatanatyam on different occasions at the House of Commons and the House of Lords on a variety of themes such as birth and significance of Ayurveda, Ahimsa, the journey of women from Vedic times to modern times, on cosmic power Shakti. UK-based Raga Sudha, who is working as a professor is also devoting time to promote and popularise the traditions and culture of India.

Raga Sudha did her graduation from Nizam College, Hyderabad, and was a disciple of late Dr. Uma Ramarao. She later moved to the UK long back and started working as teacher at the University of Sunderland in London. “I have been regularly contributing to the cultural scene in Britain by training, choreographing and performing dance at various venues throughout the country on different occasions. I also established Sanskruti Centre for Cultural Excellence which focuses on Indian Heritage and Cultural Education.” she said.

She got recognition from the British government for her extraordinary contribution in promoting and popularising Indian culture in the UK. Dubbed as woman of many firsts, she initiated Children’s Day celebrations in 2008 and also Ramayana Jayanthi celebrations in the UK in 2012. She is also the first Telugu woman to perform at Trafalgar Square, London. “I am happy to be here and representing our nation in several aspects. The Europeans enjoys our dance forms and even some children of this country are asking me to teach them. This is a big honour to me.” she said .

Raga Sudha has also launched Sur Bharati, an Indian Women group, on the social media through which she strives and works for women empowerment and continues to engage in different initiatives in the UK. Su Bharati has more than 2500 members, offering support, information, help and empowerment to women of Indian origin in the UK, in enterprises, education, social cohesion, art and culture.

She has published transcription of a 300-year old Telugu composition on Zachary Ramayana last year, which was on palm leaf folios in the possession of British Library. She is presently working on its English translation which is slated to to be brought out on the occasion of Ramayana Saharan and the UK-India Year of Culture.

Speaking to The Hans India Raga Sudha said “I am proud to be a Telugu artist and to have got an opportunity to promote our tradition and culture in the UK. Indian culture is unique and we can't find such great arts anywhere in the world. I got an amazing opportunity to exhibit the dance form in British Parliament with the blessings of my Guru. I am dedicating the record to the Telugu people living in the both AP and Telangana.”