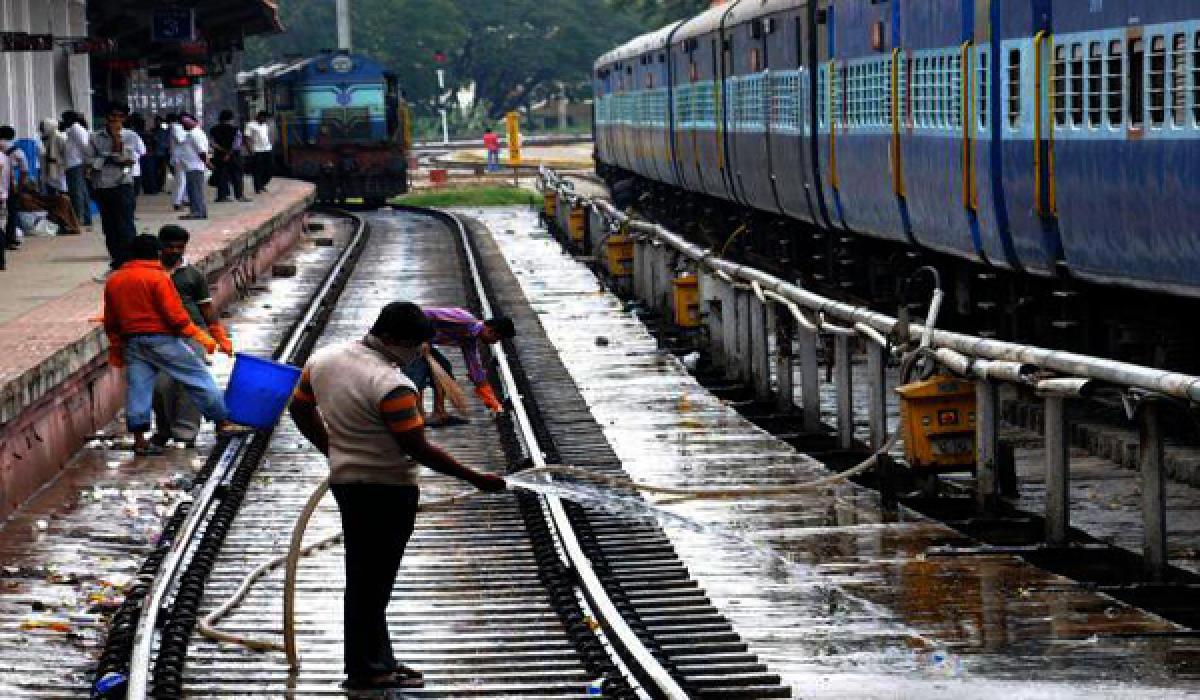 The Railway Ministry said \"no\" to a question in the Lok Sabha on May 4, 2016, when asked whether it is India\'s largest employer of manual scavengers -- sanitation workers who clear human excreta, a banned practice -- disguised as sweepers. The railways said they used floor scrubbers and vacuum cleaners within trains, and high-pressure water jets in most rail depots where Rajdhani, Shatabdi, Duront

The Railway Ministry said "no" to a question in the Lok Sabha on May 4, 2016, when asked whether it is India's largest employer of manual scavengers -- sanitation workers who clear human excreta, a banned practice -- disguised as sweepers.

The railways said they used floor scrubbers and vacuum cleaners within trains, and high-pressure water jets in most rail depots where Rajdhani, Shatabdi, Duronto, mail/express and passenger trains originate.

Other employers of manual scavengers -- almost all Dalits, lowest of Hindu castes -- include the army and urban municipalities; like the railways, these organisations also hire them on contract so that they do not appear on their rolls. One Gujarat region has now ordered an inquiry after such contract workers were found cleaning sewers without protective equipment.

The Indian Railways are the largest employer of manual scavengers, with an unknown number on their rolls, IndiaSpend reported in November 2015. Most "sweepers" -- as they are called to mask their identity as scavengers -- with the railways are employed through contractors, and they earn around Rs 200 per day, we reported.

As many as 12,226 manual scavengers were identified across India -- 82 per cent of these are in Uttar Pradesh -- according to a reply to the Rajya Sabha on May 5, 2016, by Minister of State for Social Justice Vijay Sampla. These are clearly under-stated official figures. Gujarat, for instance, admits to having no more than two manual scavengers, according to government data.

Yet, as we reported in May 2016 in collaboration with Video Volunteers, a global initiative that provides disadvantaged communities with story and data-gathering skills, in one Gujarat town Dalits were at work in the sewers.

Dhrangadhra Chief Executive Officer Charu Mori denied the existence of manual scavenging at the time. "These workers are not our responsibility since they are hired by a contractor," she said. "I am well aware that such actions are illegal and thus the municipality does not engage any manual scavengers."

After launching an online petition, Video Volunteers coerced the government into action.

The District Collector of Surendranagar, which covers Dhrangadhra, was scheduled to meet with the CEOs of seven municipalities in the district to investigate manual scavenging in the region. The meeting was twice postponed and is currently scheduled for August 29, 2016.

The issue was brought to the notice of the Collector by Video Volunteers on August 1, 2016, when it submitted the video, along with a protest petition signed by 20,000 people, demanding action against Dhrangadhra municipality for violating the law.

There are 1,67,487 households that get employment by manual scavenging in rural areas, according to data released by a 2011 government socio-economic survey.