Weather Woes Make Life Miserable For J-K Farmers. Poonch: The erratic weather that has prevailed over Jammu and Kashmir has brought back all the dark memories of the flash floods that occurred last year.

Poonch: The erratic weather that has prevailed over Jammu and Kashmir has brought back all the dark memories of the flash floods that occurred last year.

"The rain falling on the rooftop not only created fear among us but made us all sit together and pray to Mother Nature to not punish us again," said twelve-year-old Nagina Kouser. 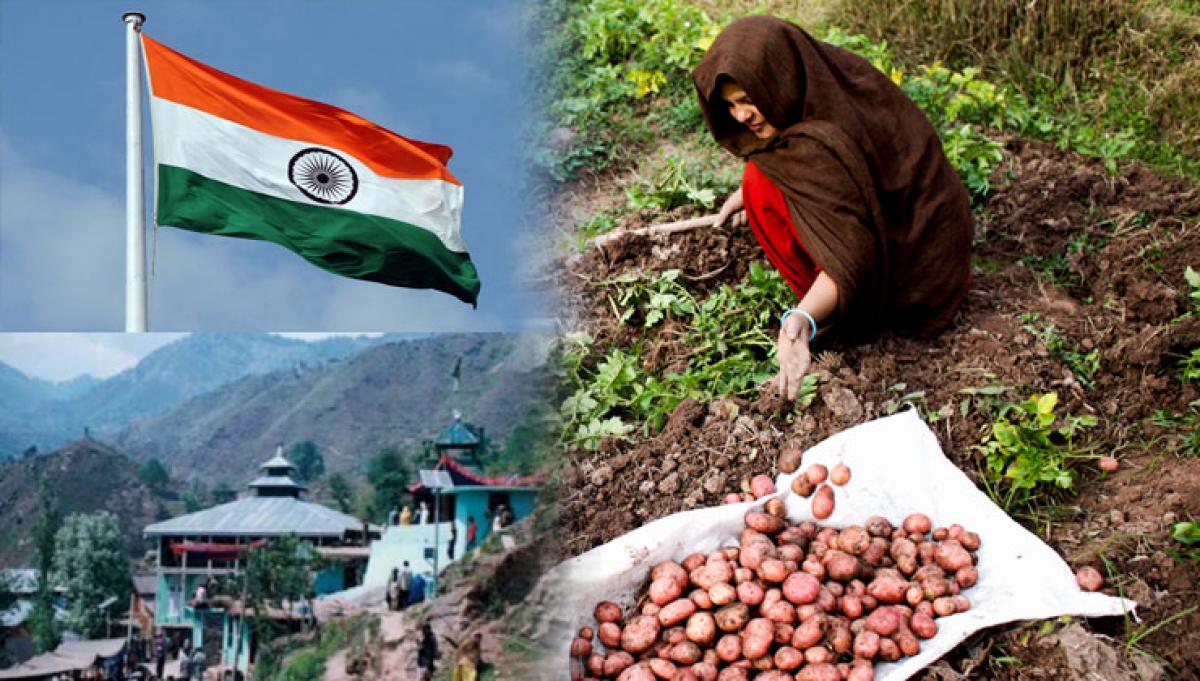 Hailing from Bariari village in Mandi tehsil of border district Poonch, Nagina and her family had suffered a huge loss of life and property due to torrential rains that flooded the entire state of Jammu and Kashmir last year.

This year, July witnessed more than eight flashfloods and cloudbursts, killing more than ten people. The forecast by the Meteorological Department that more cloudbursts are possible throughout September backs the fear. Needless to say, the state is witnessing a massive climatic change.

The effects of climate change are grave on states like Jammu and Kashmir, which are highly dependent on agriculture. In such states, the welfare of population and economic development both rely on the productive croplands, which at the moment are facing serious threat from global warming.

Last year, the floods had washed away crops worth Rs. 365 crores and 13,000 hectares of cultivable land in Jammu. But before the farmers could overcome the trauma of last year's devastation, it has made a comeback.

According to experts, for the last two years, there has been greater frequency of deadly interaction of moist warm monsoon winds and cool dry western winds called western disturbance creating a low pressure area over the state, resulting in extremely heavy rain.

This climate change has been creating troubles for the farmers for quite some time now as reflected in its changing monsoon pattern.

According to Alam Din, a farmer from border district of Poonch in J&K, monsoon would come in June and stay till September.

But now the pattern has changed as it doesn't arrive on the expected time. "In 2013, even though the rains were not enough we had managed a year's stock. Last year, the erratic rainfall and floods damaged the crops putting our future in dark," he said fearing that if the event repeats itself this year, they might not have anything to eat the next year.

"Farmers are now sick of the erratic weather condition. Hails and storms have become frequent while heavy rains occur erratically. It damages the standing crops and our dreams," shared an upset Parveen Akhter, another farmer from Poonch.

Besides the rainfall, the reduction in snowfall has been clearly noticed over the last few years in the entire state.

Horticulture is facing a similar fate. A report published in Kashmir Life confirms that with the changing patterns of rainfall during summers, the temperature keeps fluctuating, affecting the horticulture sector in such a way that Kashmir is at the verge of losing another crop. Around five to ten per cent loss has been reported from the harvest of stone foods, which include cherry, apricots, plums and prunes.

The farmers in remote villages blame deforestation for the changing pattern in rainfall and the calamities. Confirming the belief of the villagers, Professor Mohammad Maroof who teaches in Degree College, Mendhar in Poonch said that increasing population is one of the leading factors contributing to deforestation that ultimately leads to climate change.

According to Professor Maroof, "Increasing number of members in a family demands more land for agricultural purposes. As a result, trees are being cut to fulfill that need."

Lives are being lost and farmers are losing their dependency on agriculture produce. But is the state prepared to suffer another loss? It is not only the immediate action that is required but a system that will bring the public and the government together to tackle climate change.

Chief Minister Mufti Mohammad Sayeed has approved the first-ever disaster management plan in the state in an effort to reduce the vulnerability to hazards and cope with disasters and natural calamities in a more effective manner.

The Charkha Development Communication Network feels that the only way to instill confidence in people in the plan is its strong and effective implementation on ground. Otherwise it will only be a good looking document just like the State's Action Plan for Climate Change which is doing no good to the state.