Tourist Hotspot Ladakh\'s Pangong Lake On Threat To Extinction. In 2010, Aamir Khan\'s \'3 Idiots\' had made it large at the box office and had won millions of hearts across the globe. Featured in its last scene was the beautiful Pangong Tso (Hollow Lake) that had charmed many.

Leh (Ladakh): In 2010, Aamir Khan's '3 Idiots' had made it large at the box office and had won millions of hearts across the globe. Featured in its last scene was the beautiful Pangong Tso (Hollow Lake) that had charmed many. 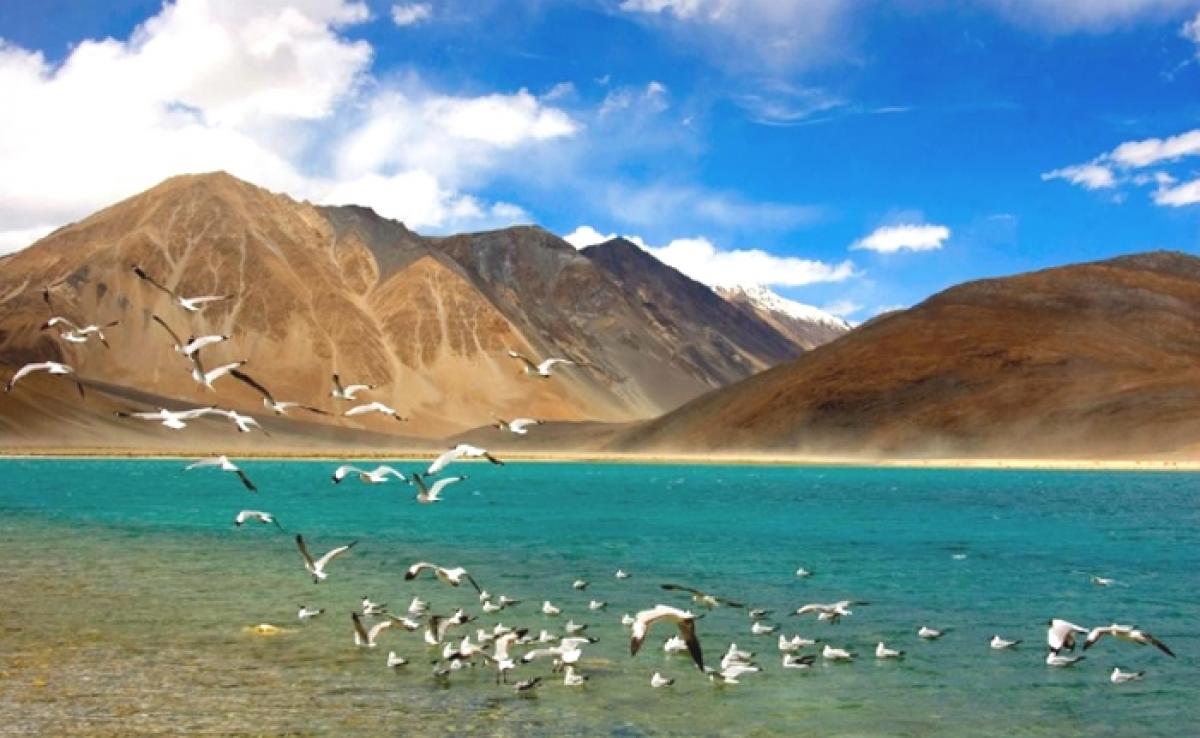 Located amidst the beautiful arid landscape, this picture-perfect lake in Ladakh's Changthang region, after the movie, emerged as one of the most sought after tourist destinations. Earlier too people would visit Ladakh but the craze to witness the beauty of this lake drastically went up in the last few years and so is the threat to its existence.

Situated at an altitude of 14,000 feet, Pangong Tso can be reached after a 160-kilometre-long drive from Leh. On this dream like journey, the strokes of green from the agriculture fields and hues of the prayer flags add magic to the otherwise barren mountains. But what is equally heart breaking is to see the damage being done to the fragile environment and culture by the increasing number of tourists every year.

While tourism has become a central part of Ladakh's economy, it has also led to several challenges including environment pollution, traffic, and interference of private self-driven and rented cars. Although the problem is prevalent in every part of this snow-desert but what is happening in and around Pangong Tso, if not stopped at this stage will destroy its beauty and in no time Pangong will see a similar fate like the Dal Lake in Srinagar.

The travel agents (three hundred and three as per the registered list) organize stay-over trips to the lake where travellers are suggested to carry packaged food and drinks. On their way, they do not give a second thought before throwing wrappers on the roads from where the winds carry these to rivers and mountains - that is just the beginning of the nuisance being caused by the tourists. Further, they would take halts to drink, eat, play music and enjoy.

Seldom do they realize that all these activities harm the wildlife. Green fields where animals graze are turned into a trash site with plastic wrappers, bottles and crushed beer bottles scattered everywhere.

A few kilometres away from the lake, mountains offer a sneak-peak into the different shades of the blue. It is indeed mesmerizing but as one arrives at the lake, the disappointment takes over. Several cars parked next to the lake's shore. One can see people bathing in the lake, eating food and throwing bottles and wrappers into it, washing their bikes and cars in the lake - and there is no one to stop them.

"In the last forty years, no one had ever washed a vehicle in Pangong. It is a recent trend that domestic tourists have started showing stunts in the lake which a local driver won't do or approve of. If the locals or drivers intervene and request travellers to not spoil the lake, they become the target - 'Gorkhay, how dare you?' is how tourists talk to the locals.

Ladakhis, non-violent by nature, do not respond, and try their best to maintain the sanctity of the place," said Dorjay Namgyal, President of Ladakh Taxi Operator Cooperatives Limited, Leh.

According to Najumul Huda, a local who had visited Pangong four years ago was surprised to see the number of restaurants that have come up to cater to the needs of the travellers.

"There was only a tea stall that would sell local delicacies like momos or thukpa. But now the '3 Idiots' theme based restaurants have come up selling all kind of packaged foods and drinks. With no waste disposal system in place, they contribute to the pollution that will only go up in the coming years," rued Najumul Huda.

Ladakh Buddhist Association president Tsewang Thinles believes that it is very important to preserve the Ladakhi culture and its fragile environment.

"No one bothers to follow the norms set by the Wildlife Act. Even the cars are parked next to the lake. From next year onwards we have plans to barricade and stop the vehicles 500 meters before the lake as it serves as an important breeding ground for a variety of birds including a number of migratory birds," said Tsewang Thinles.

Chairman of Ladakh Autonomous Hill Development Council, Leh, Rigzin Spalbar has stressed on the need of developing strict policies and a monitoring mechanism to prevent all sorts of trespassing, rash driving and ecological damaging activities by all vehicles plying in Ladakh. The Charkha Development Communication Network supports this directive which wants the information to be conveyed directly in writing to the Deputy Commissioner and Senior Superintendent of Police.

Visitors to Pangaong should help to preserve the beauty of the Pangong Lake.

The views expressed in the above article are that of Stanzin Kunzang Angmo.