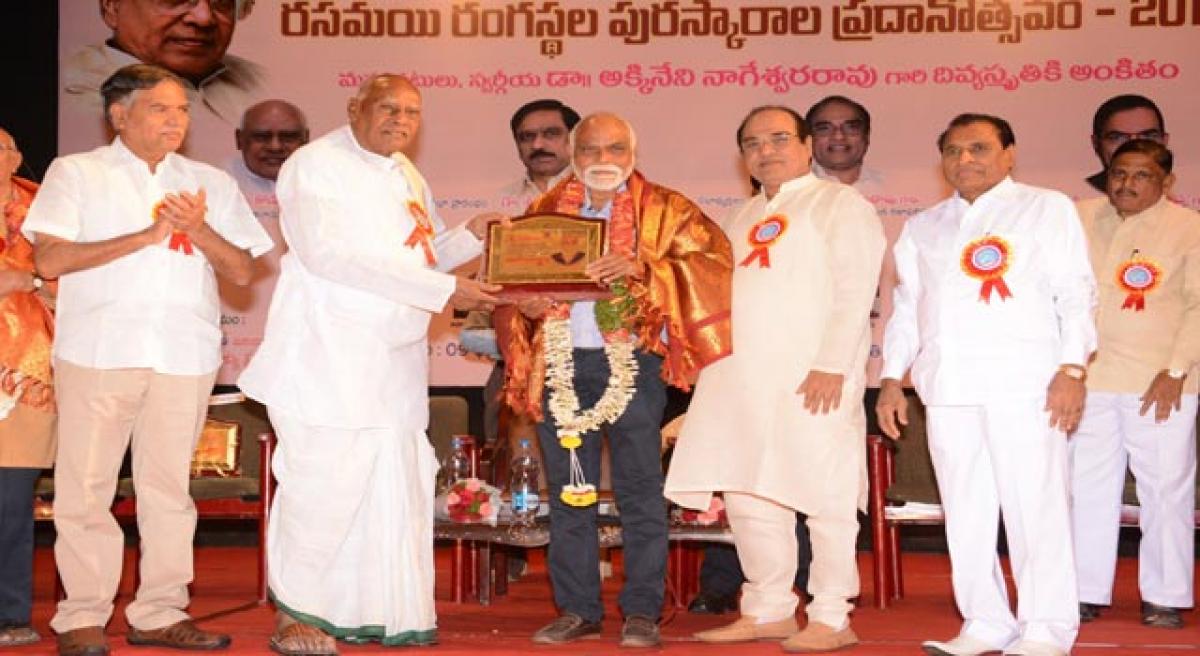 Prof. NJ Bhikshu of the Department of Theatre Arts, SN School of Arts and Communication, University of Hyderabad (UoH), has been given recently the Rangasthala Puraskaram by the well known cultural organisation Rasamayi.

Prof. NJ Bhikshu of the Department of Theatre Arts, SN School of Arts and Communication, University of Hyderabad (UoH), has been given recently the Rangasthala Puraskaram by the well known cultural organisation Rasamayi. He received the award from K Rosaiah, former Chief Minister of erstwhile AP and former Governor of Karnataka and Tamil Nadu.

Prof. MN Sarma, who had taught Prof. Bhikshu also received the award at the function organised at Ravindra Bharati. Rasamayi is a 45-year-old literary, cultural organisation run by the well-known poet and writer MK Ramu. This organisation honours the work of dedicated theatre artistes every year by giving them the ‘Rasamayi Theatre Award’. It's been recognised as a prestigious award instituted by a poet himself.

Prof. Bhikshu processes an experience of three-and-a-half decades in theatre practice. Having started as an amateur actor his pursuit took him towards becoming a professional actor, director, script writer, music composer, set designer and an academician. He has a Master’s and Doctoral degrees in Theatre Arts from UoH.

He joined the UoH in 1991 as a faculty and currently is Head, Department of Theatre arts, SN school of Arts and Communication. He has been felicitated on various occasions by the then Government of Andhra Pradesh and other NGOs literary and cultural organisations in recognition of his contribution to Telugu theatre and his directorial works transcend across the media.

A glimpse at his works that garnered him with due recognition such as ‘Oka Voralo Nalugu Nijaalu’ (a Telugu stage adaptation of Akira Kurosawa’s film ‘Roshomon’), ‘Devudnichusinavaadu’ (a stage adaptation of a short story of ‘Tilak’), ‘Amaravati Kadhalu’, short stories of Satyam Shankaramanchi, reflect the same.

As a theatre music composer he was associated with theatre personalities of international and national repute, like AR Krishna, Prof. Ram Gopal Bajaj, Prof. S Ramanujam, Prof. MN Sarma, MK Raina, Prof. DSN Murthy, etc. Prof. Bhikshu’s doctoral work on ‘Oggu Katha’, a Telangana folk narrative form is the first one ever to be attempted as a theatrical study.

he book was released by Dr. KV Ramanachari, Adviser, Govt of Telangana and Mamidi Hari Krishna- Director, Department of Language and Culture, in the presence of Chukka Sattaiah, Sangeet Natak Academy awardee, at the Ravindra Bharati in August 2016.