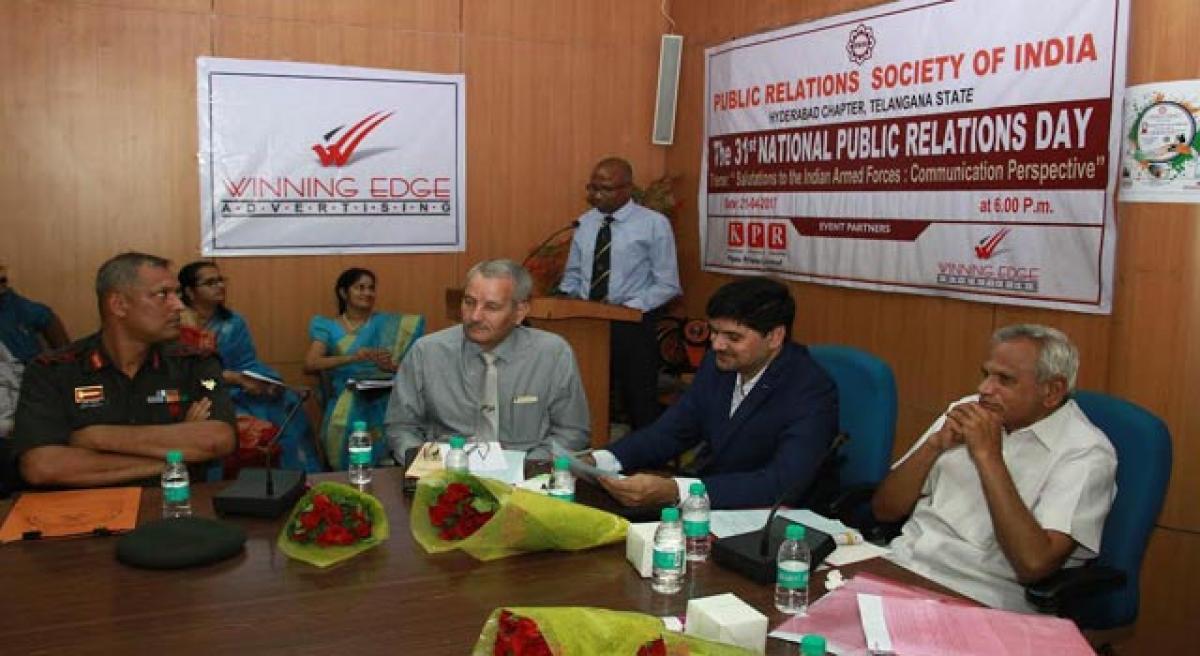 The Hyderabad chapter of the Public Relations Society of India (PRSI), held a seminar on ‘Salutations-Indian Armed Forces- Communication Perspectives’ recently, on the occasion of the National Public Relations Day (April 21).

The Hyderabad chapter of the Public Relations Society of India (PRSI), held a seminar on ‘Salutations-Indian Armed Forces- Communication Perspectives’ recently, on the occasion of the National Public Relations Day (April 21).

Keeping in mind the current trends of the country, it was felt that the Indian Armed Forces, comprising of the Military, Air force and the Navy played a significant role in safeguarding the citizens against invasion of terrorists and other anti-national elements, trying to disengage the unity and spread hatred in our country.

Three important Officials from the Army and the Air force participated in the Seminar and expressed their concern. Speaking on the occasion, Brig Ramesh, Head of Faculty in the College of Defence Management, Secunderabad stated, “The Information scenario has changed the communication methods, and today we are all addicted to social media. With the advent of smart phones, communication has revolutionised the world order.”

“The Armed Forces have certain restrictions in divulging information and the Media needs to be pro- active in projecting responsible public relations in the age of Social Media,” he added. He emphasised the growth of Public Relations and Information Communication. Sqn Ldr Malcolm Wolfe, Indian Air force (Retd) in his address said, “Public Relations begins from home.

We need to be more effective and responsible in our approach to communication and Information flow. We are all living in an age where the world is fast paced by the revolution of the electronic age and has totally made all of us dependent on communication.” He lauded the efforts of the Hyderabad chapter for bring about awareness, by organising useful and beneficial programmes for the citizens.

Later, Col A Tripathy, Commandant, 6 Jammu and Kashmir Light Infantry Regiment stated, “Instruments of national power are the tools a country uses to influence other nations. He stressed the need for military power, which is a very important part of national power. He quoted ‘Chanakya’, stating, “The Power of the Nation is known by the possession of might and strength.” He also screened a short film titled ‘Indian Army, an Instrument of National Power.’

Speaking on the occasion, Dr Venugopal Reddy in his presidential address said, “In an age of communication revolution, Public Relations personnel have a great role to play, and with the help of communication method we need to be more cautious in building a string and a positive image, both for the country and the society at large.”