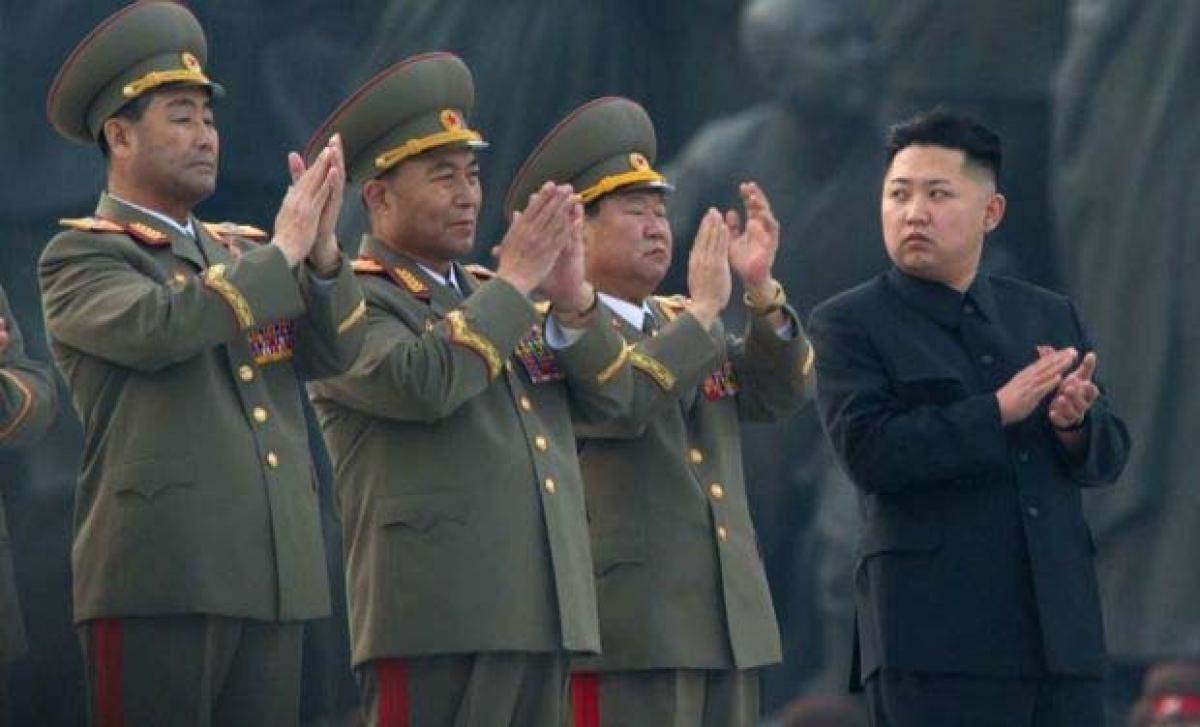 North Korea put its troops on a war footing on Friday as South Korea rejected an ultimatum to stop propaganda broadcasts or face military action, prompting China to voice concern and urge both sides to step back after an exchange of artillery fire.

North Korea put its troops on a war footing on Friday as South Korea rejected an ultimatum to stop propaganda broadcasts or face military action, prompting China to voice concern and urge both sides to step back after an exchange of artillery fire. North Korea's Foreign Ministry said the country's military and the public stood ready to safeguard its regime even if it meant fighting an all-out war, and rejected the idea of restraint in an apparent rebuff to China's call.
North Korea's official media said its military was not bluffing, and the deputy North Korean ambassador to the United Nations, An Myong Hun, reiterated Pyongyang's threat of "strong military counter-action" if the South Korean broadcasts did not stop.
An also told reporters North Korea had asked the 15-member United Nations Security Council to hold an urgent meeting on the situation.
United Nations Secretary-General Ban Ki-moon appealed for the Koreas not to take any action that could further aggravate tensions, but diplomats said there had been no discussion among Security Council members about holding a meeting.
South Korea rejected an ultimatum that it halt anti-Pyongyang broadcasts by Saturday afternoon or face attack.
It began blasting anti-North propaganda over the Demilitarised Zone (DMZ) separating the countries on Aug. 10, resuming a tactic both sides had stopped in 2004, a few days after landmines wounded two South Korean soldiers along the DMZ.
North Korea resumed its own broadcasts on Monday and on Thursday, according to Seoul, launched four artillery shells into South Korea in apparent protest at loudspeaker broadcasts. The South fired back 29 artillery rounds. Pyongyang accused the South of inventing a pretext to fire into the North.
The United States, which has 28,500 military personnel based in South Korea, said it had resumed its annual joint military exercises there after a temporary halt to coordinate with Seoul over the shelling from North Korea.
The annual exercise, code-named Ulchi Freedom Guardian, began on Monday and runs until next Friday.
North Korea regularly condemns the manoeuvres as a preparation for war and in the past has fired rockets into the sea while they proceeded.
South Korean Vice Defence Minister Baek Seung-joo said his government expected North Korea to fire at some of the 11 sites where Seoul has set up loudspeakers on its side of the DMZ.
China, which remains reclusive North Korea's main economic backer despite diminished political clout to influence Pyongyang, said it was deeply concerned about the escalation of tension and called for calm from both sides.
In Washington, the U.S. assistant secretary of defence for East Asia, David Shear, said the United States was "very concerned" by the North Korean shelling and called on the North "to cease provocations across the DMZ and restore calm to the peninsula."
SIDES HAVE PULLED BACK FROM BRINK IN PAST
Since the 1950-53 Korean War ended in a truce, not a peace treaty, Pyongyang and Seoul have often exchanged threats, and dozens of soldiers have been killed in clashes, yet the two sides have always pulled back from a return to all-out war.
Both sides reported no casualties or damage in their territory from the latest incidents, indicating that the exchanges this time were just warning shots.
However, the incidents have been some of the most serious since the deadly 2010 sinking of a South Korean warship, which Seoul blames on Pyongyang and represent a further blow to South Korean President Park Geun-hye's efforts to improve North-South ties, which have been virtually frozen since then.
Park cancelled an event on Friday and made a visit to a military command post, dressed in army camouflage.
North and South Korea traded harsh rhetoric late into Friday night.
South Korean Defence Minister Han Min-koo accused North Korea of committing "cowardly criminal acts."
"This time, I will make sure to sever the vicious cycle of North Korea's provocations," he said.
North Korea's official news agency said North Korean leader Kim Jong Un had declared a "quasi-state of war" in front-line areas and South Korea's Yonhap news agency quoted an unnamed South Korean official as saying there were indications the North was preparing to fire short-range missiles.
Yang Moo-jin, professor at the University of North Korean Studies in Seoul, said the fact that the shells had caused no damage was positive.
"There is always a chance for war, but that chance is very, very low," he said.
Joel Wit of 38 North, a North Korea monitoring project at Johns Hopkins University in Washington, said the artillery exchanges were worrying but added that tensions could well cool off again.
"When it's happened in the past, there have been dangers of escalation and the U.S. has had to restrain South Korea. It's a very dangerous situation, though it could die down, and chances are it will die down," he said.
North Korea's shelling came after it had demanded last weekend that South Korea end the broadcasts or face a military response - a relatively rare case of following up on its frequent threats against the South.
Its 48-hour ultimatum, delivered in a letter to the South Korean Defence Ministry, was also uncharacteristically specific, said John Delury, a North Korea expert at Seoul's Yonsei University. The deadline is around 5 p.m. on Saturday in Seoul (0800 GMT).
Baek, the South Korean vice defence minister, said the broadcasts would continue unless North Korea accepted responsibility for the 2004 incidents and apologised for the mines. Pyongyang has denied responsibility.
Daniel Pinkston of the International Crisis Group think-tank said the large U.S. troop presence for the military exercises could reduce the risk of escalation by pressuring South Korea to exercise restraint, and deterring North Korea.
"This is a bad time to pick a fight with the South while it has all these resources there," he said.
Show Full Article
Email ArticlePrint Article
More On