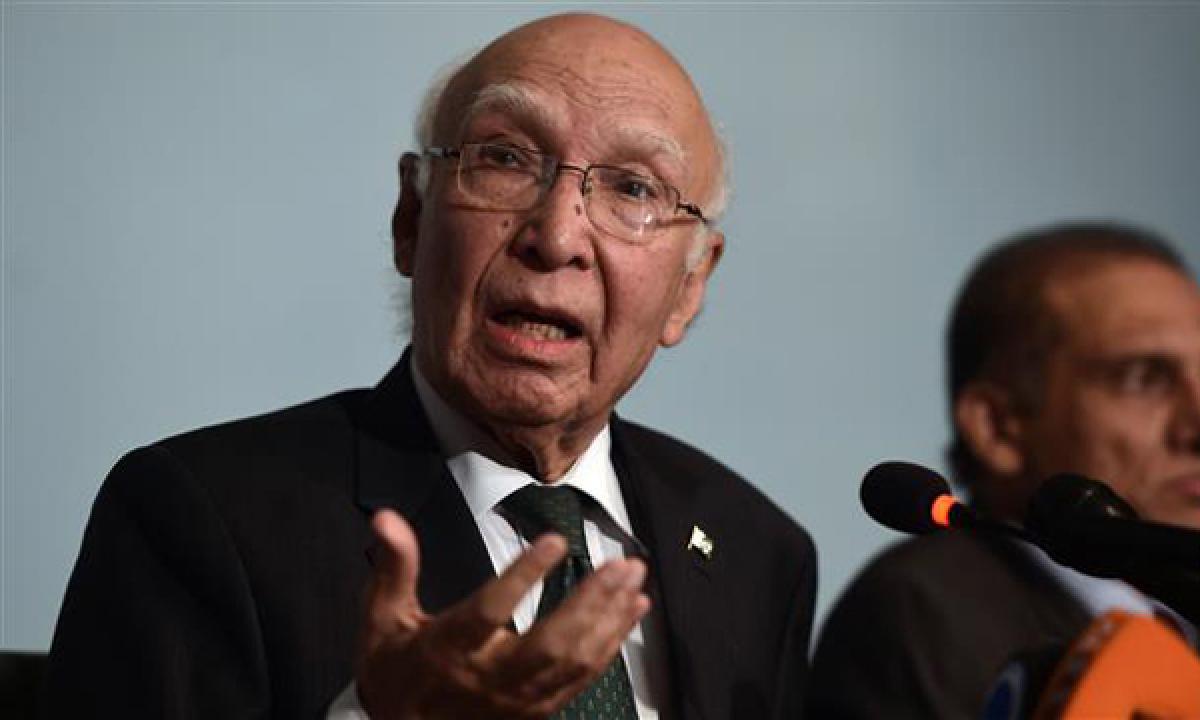 Pakistan\'s top foreign policy chief Sartaj Aziz has said Islamabad was striving to hold peace dialogue with Afghanistan. \"It was disappointing that some elements in Afghanistan were not willing to have the dialogue process with Pakistan and these elements are creating suspicion over Pakistan\'s role,\" the Nation quoted Aziz as saying in an interview on Sunday.

"It was disappointing that some elements in Afghanistan were not willing to have the dialogue process with Pakistan and these elements are creating suspicion over Pakistan's role," the Nation quoted Aziz as saying in an interview on Sunday.

Prime Minister Nawaz Sharif's Advisor on Foreign Affairs blamed the Afghan Intelligence Agency for hindering the dialogue between Taliban and the Afghan government.

Aziz said that the second session of dialogue between Taliban and the Afghan government was cancelled when the National Directorate of Security issued reports regarding death of Mullah Omar, the former chief of Taliban.

He said that the doors for bilateral dialogues were further closed when Mullah Omar's successor Mullah Akhtar Mansour was killed in a US drone strike in Balochistan.

"Pakistan endeavours to have a dialogue process but the condemnable statements from Afghan politicians against Pakistan are negatively impacting the environment," Aziz said.

He said massive withdrawal of international forces and increase in operations of armed insurgents after 2014 has led to the deterioration of the situation in Afghanistan.

Aziz said the remarks by Afghan President Ashraf Ghani at the Heart of Asia Conference, recently held in Amritsar, India, were indicative of the growing frustration in Afghanistan. "It is imprecise to blame Pakistan for backing Taliban," he said.

The advisor said that the ongoing operation Zarb-e-Azb has destroyed the Haqqani Network established in the tribal areas and it was no longer operating on Pakistan's soil.

However, he said that the possibility of presence of scattered extremists in the country could not be overlooked.

"Such elements were creating hurdles for the peace process of the two countries and therefore we had asked Afghan President Ashraf Ghani at the Heart of Asia Conference to make efforts for improving the security system on Pakistan-Afghan border," Aziz said.