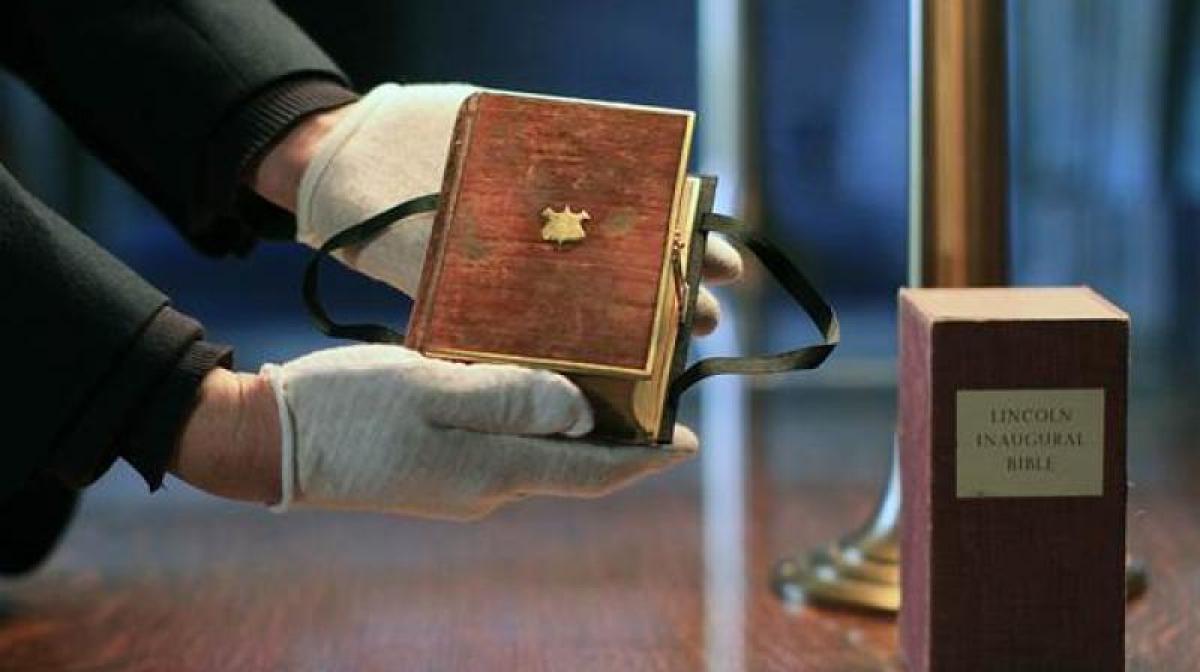 President-elect Donald Trump would be following the long-established tradition of placing his hand on the historic Lincoln Bible at the US Capitol facing the majestic National Mall to take oath as the 45th President.

President-elect Donald Trump would be following the long-established tradition of placing his hand on the historic Lincoln Bible at the US Capitol facing the majestic National Mall to take oath as the 45th President.

In fact, Bible is now considered to be sacrosanct to the presidential inauguration ceremonies to this oldest democracy of the world. In recent history, only a few times in adverse circumstances a US president has not used a bible for swearing in.

It was on September 14, 1901 when the then Vice President Theodore Roosevelt was sworn in after the assassination of President William McKinley that no bible was used.

The First US President George Washington used the Holy Bible from St John's Masonic Lodge No 1 for his swearing in on April 30, 1789. He opened at random due to haste to Genesis 49:13.

There is no record of the kind of Bible or other books being used for the next eight presidential swearing ins.

On March 4, 1825, John Quincy Adams took the oath upon a volume of law. This information is as per his own admission.

The origin of Polk's Bible is unknown, although, a letter in the front of the volume indicates that after the Inauguration, it was presented to Polk by the Marshal of the District of Columbia. There is no indication that it was open during the oath-taking, and has no marked passages.

Next known record of use of bible is by Abraham Lincoln on March 4, 1861. Bible purchased was by William Thomas Carroll, Clerk of the Supreme Court, opened at random.

It is almost identical to James Buchanan's 1857 Bible. The origin of Lincoln's second Inaugural Bible used for his swearing is on March 4, 1865 unknown, but it was open to Matthew 7:1; 18:7; and Revelations 16:7. On April 15, 1865 Vice President Andrew Johsnson was sworn in after Lincoln?s assassination. He too took oath on a bible.

Thereafter almost all the presidents have taken oath on a bible. On April 12, 1945, Vice President Harry S Truman was sworn in after the death of President Franklin D Roosevelt. "There was much scurrying around to find this book on which to take the oath," Truman said later.

It was closed while he repeated the oath, and he kissed the book when he finished. For his next inauguration in January 20, 1949, Truman used two Bibles: the first was the same Bible he used in 1945 when he was sworn in upon the death of Franklin Roosevelt, open to Matthew 5 (Beatitudes).

The second was a Gutenberg facsimile given to him by the Independence, Missouri Chamber of Commerce, opened to Exodus 20 (the Ten Commandments). Dwight D Eisenhower also used two bibles for his oath taking on January 20, 1953.

The first Bible was used by George Washington in 1789 (belonging to St. John's Masonic Lodge No. 1), opened to II Chronicles 7:14; and his own personal "West Point Bible," opened to Psalm 33:12.

There is also no record of the kind of bible or book used by then then Vice President Lyndon B Johnson at the assassination of President John F Kennedy on November 22, 1963.

Ronald Regan used the family bible given to him by his mother for both his swearing ins in 1981 and 1985. George H W Bush used family Bible, open to Matthew 5, and the Bible used by George Washington (belonging to St.John's Masonic Lodge No. 1), opened at random.

The oath of office will be administered by the Chief Justice of the United States John Roberts.

The Bible was originally purchased by William Thomas Carroll, Clerk of the Supreme Court.

The Lincoln family Bible, which is in the Library of Congress collection, had been packed with other belongings that were traveling from Springfield.

The Bible itself is bound in burgundy velvet with a gold-washed white metal rim around the three outside edges of both covers.

All its edges are heavily gilt. In the center of the top cover is a shield of gold wash over white metal with the words 'Holy Bible' chased into it.

In the back of the volume, along with the seal of the Supreme Court, it is annotated: "I, William Thomas Carroll, clerk of the said court do hereby certify that the preceding copy of the Holy Bible is that upon which the Honorable.

R B Taney, Chief Justice of the said Court, administered to His Excellency, Abraham Lincoln, the oath of office as President of the United States.