US: 4 killed, 7 critical after train crashed into bus full of tourists 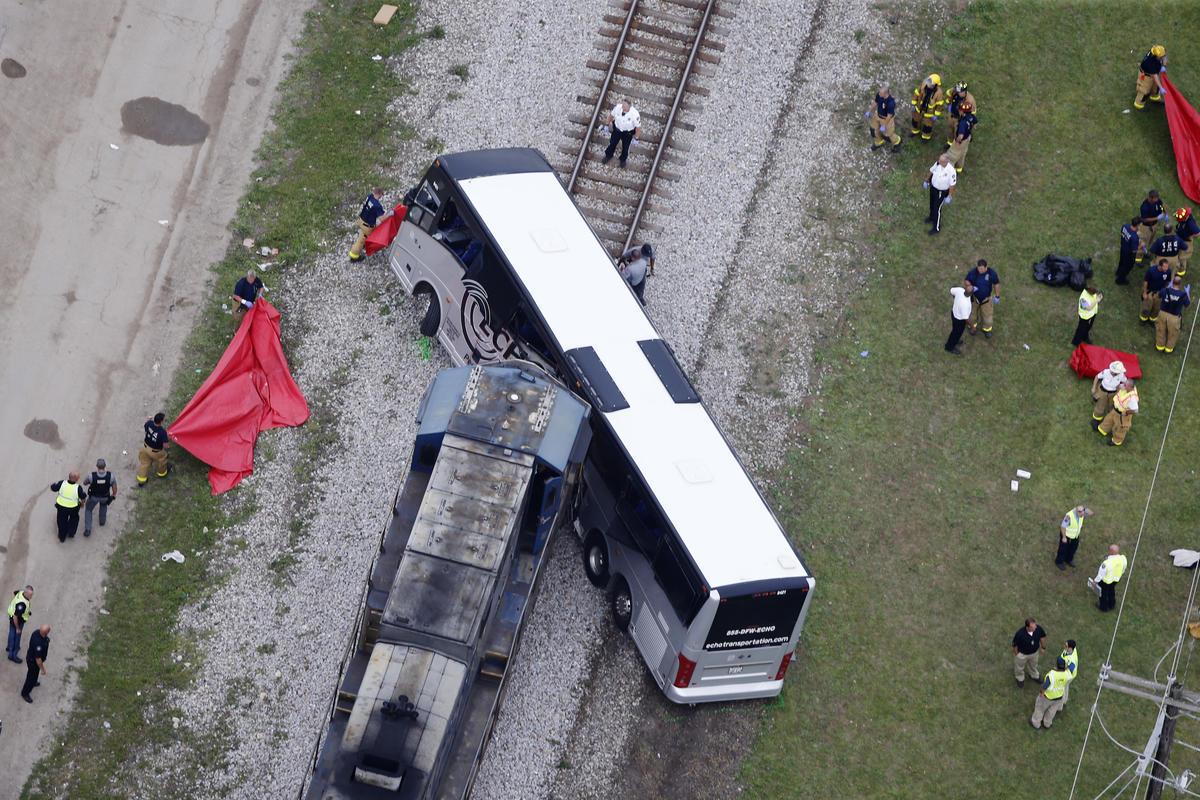 A freight train crashed into a bus full of Texas tourists visiting Gulf Coast casinos, killing four in Biloxi, Mississippi.Forty people were hurt, seven critically. The cause of the Tuesday afternoon crash was under investigation.

A freight train crashed into a bus full of Texas tourists visiting Gulf Coast casinos, killing four in Biloxi, Mississippi.Forty people were hurt, seven critically. The cause of the Tuesday afternoon crash was under investigation.

Witnesses told Mississippi news outlets the bus appeared to have been stuck on the tracks when it was hit. The crossing is on a steep embankment and has a sign warning drivers that it has a low ground clearance.

Authorities on the scene said it took more than an hour to get everyone aboard the bus out of the wreckage. Two people had to be removed with metal-cutting equipment. The CSX Transportation locomotive pushed the bus about 300 feet before coming to a stop with the mangled bus still straddling the tracks.

Police chief John Miller said he was unsure why the train was stopped on the tracks.

"We don't know if there were mechanical issues or what was taking place," he said.

Miller said the Echo Transportation bus had come from Austin, Texas, carrying passengers to one of Biloxi's eight casinos. Ameet Patel, senior vice president of regional operations for Penn National Gaming, owner of Hollywood Gulf Coast Casino in Bay St. Louis and Boomtown Biloxi Casino, said the bus was traveling from the Hollywood casino to the Boomtown casino at the time of the crash.

The weeklong trip was organized by a senior citizens' center in Bastrop, Texas, about 30 miles east of Austin. Some passengers boarded in each city Sunday. They also were supposed to visit New Orleans and then return home Saturday, according to a flier about the tour posted by Texas media.

The names of the dead were not immediately released.

Michelle Crowley of the Biloxi fire department said 40 people were injured; of those, seven were in critical condition.

A woman who lives about a block from where the train and bus finally came to a stop after the train crashed into the bus says she heard a "loud boom" and knew immediately what had happened.

Cecelia McDonald said she ran out of her house and saw a scene of carnage.

Witnesses told the Sun Herald of Biloxi that the bus was stuck on the tracks for about five minutes before he saw the train hit it. Mark Robinson said some people were getting off the bus as the driver tried to move it, and at least one person was shoved under the bus when the train hit.

A nearby car was used as a stepladder after the crash to get people off the bus, and emergency workers pulled passengers through windows.

Robinson said he thinks the train track, which is on an embankment, poses safety issues.

"It's too steep there," Robinson said.

In addition the sign warning of a low ground clearance, the crossing has a bell, lights and crossing arms.

Biloxi Fire Chief Joe Boney says rescuers needed one hour and four minutes to clear everyone from the wreckage. Two people had to be cut out of the bus.

Vincent Creel, the city spokesman, said 48 passengers and the driver were on the bus.

The train was headed from New Orleans to Mobile, Alabama, at the time of the crash, said CSX spokesman Gary Sease. He said the train crew was not injured. The single track is the CSX mainline along the Gulf Coast, passing through densely populated areas of southern Mississippi.

Federal Railroad Agency records show 10 trains a day typically use the track, with a maximum speed of 45 mph. Records show there have been 16 accidents at the crossing since 1976, including in 1983 and 2003, each of which involved one fatality. A delivery truck also was struck at the same crossing in January, WLOX-TV reports. No one was injured in that crash.

The bus was marked as belonging to Echo Transportation, which Texas corporate records show is a unit of a company called TBL Group, based in Grand Prairie, near Dallas.

"We can't confirm anything at this point," said Elisa Fox, a lawyer for the bus company. "We're trying to mobilize to assess the situation."

Federal Railroad Administration spokesman Marc Willis said the agency is sending three inspectors to investigate, while Mississippi is sending one. The National Transportation Safety Board said it also is investigating.