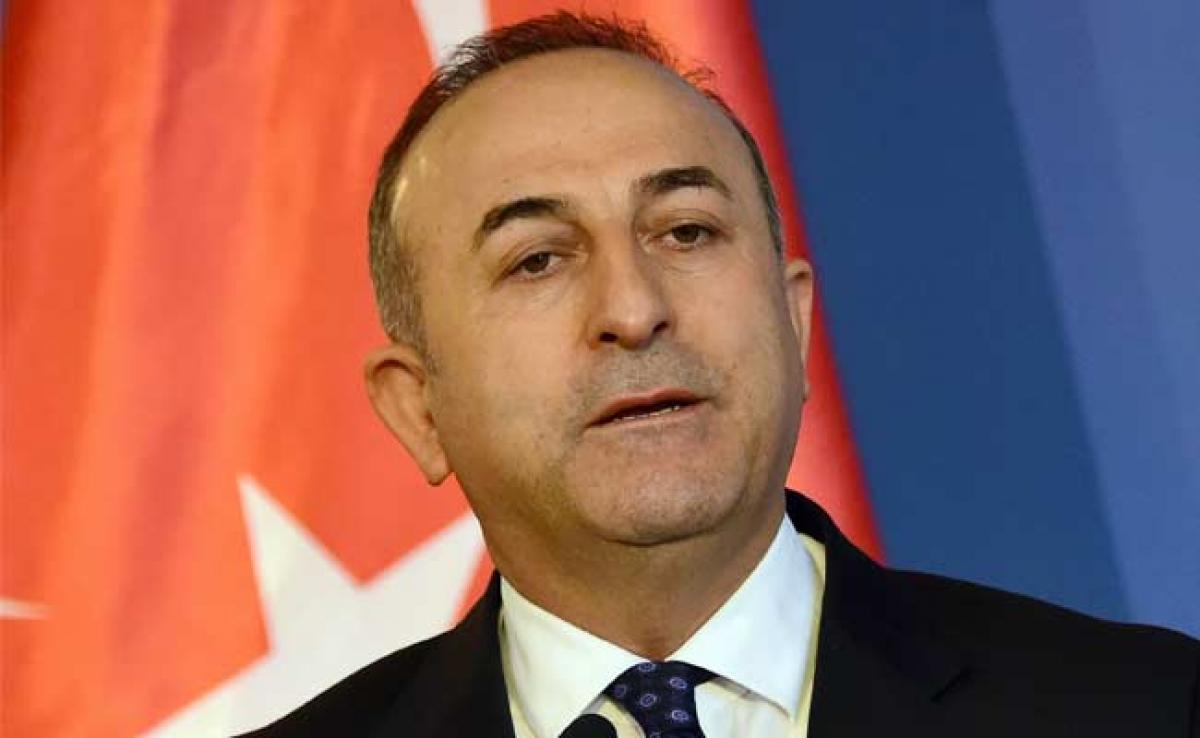 The Netherlands barred Turkey\'s Foreign Minister from flying to Rotterdam on Saturday and President Tayyip Erdogan responded by calling his NATO partner a \'Nazi remnant\' as a row over Ankara campaigning among emigre Turkish voters intensified.

The Netherlands barred Turkey's Foreign Minister from flying to Rotterdam on Saturday and President Tayyip Erdogan responded by calling his NATO partner a 'Nazi remnant' as a row over Ankara campaigning among emigre Turkish voters intensified.

Rotterdam had banned Foreign Minister Mevlut Cavusoglu from attending a Turkish rally in support of Erdogan's drive for sweeping new powers, to be put to a referendum next month.

But Cavusoglu said on Saturday morning he would fly to the city anyway and accused the Dutch of treating Turkish citizens in the country like 'hostages'.

'I sent them so they could contribute to your economy ... They're not your captives,' he told CNN Turk television.

'If my going will increase tensions, let it be. What damage will my going have on them? I am a foreign minister and I can go wherever I want,' he said before the Dutch barred his flight.

Cavusoglu had threatened harsh economic and political sanctions if the Dutch refused him entry, a threat that proved decisive for the Netherlands government.

It cited public order and security concerns in withdrawing landing rights for Cavusoglu's flight. But it said the sanctions threat made the search for a reasonable solution impossible.

Dutch prime minister Mark Rutte said that while the Netherlands and Turkey could search for 'an acceptable solution', Turkey was not respecting the rules relating to public gatherings.

'Many Dutch people with a Turkish background are authorized to vote in the referendum over the Turkish constitution. The Dutch government does not have any protest against gatherings in our country to inform them about it,' he said on Facebook.

'But these gatherings may not contribute to tensions in our society and everyone who wants to hold a gathering is obliged to follow instructions of those in authority so that public order and safety can be guaranteed,' Rutte added.

Four planned Turkish rallies in Austria and one in Switzerland have also been cancelled in the dispute.

German Chancellor Angela Merkel, whose country Erdogan compared last week with Nazi Germany, has said she will do everything possible to prevent any spillover of Turkish political tensions onto German soil.

Cavusoglu said Turks in Germany were under systematic pressure from police and intelligence services.

Erdogan is looking to the large number of emigre Turks living in Europe, especially Germany and the Netherlands, to help clinch victory in next month's referendum which will shape the future of a country whose position on the edge of the Middle East makes it of crucial strategic importance to NATO.

He has cited domestic threats from Kurdish and Islamist terrorists and a July coup bid as cause to vote 'yes' to his new powers. But he has also drawn on the emotionally charged row with Europe to portray Turkey as betrayed by allies, facing wars on its southern borders and in need of strong leadership.

'Listen Netherlands, you'll jump once, you'll jump twice, but my people will thwart your game,' Erdogan said. 'You can cancel our foreign minister's flight as much as you want, but let's see how your flights come to Turkey now.'

'They don't know diplomacy or politics. They are Nazi remnants. They are fascists.'

Erdogan chafes at Western criticism of his mass arrests and dismissals of people authorities believe were linked to a failed July attempt by the military to topple him.

Cavusoglu made a veiled threat of possible realignment of Turkey in the world in a reference to Russia.

'The Netherlands should stop this faulty understanding and approach...If they think Turkey will take whatever they do, that Turkey is gone. I told them this, stop this boss-like attitude. If Europe keeps this up, they will lose many places, including Russia and us.'