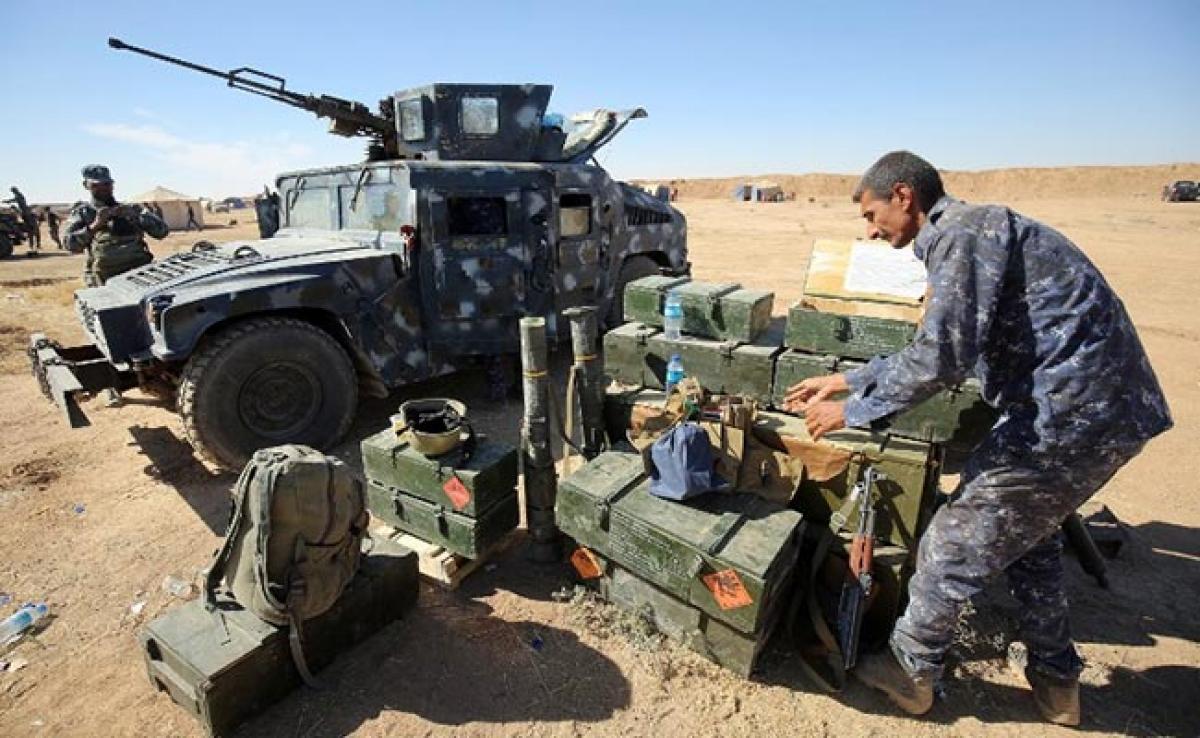 The forces have recaptured several neighbourhoods from ISIS since starting the push for west Mosul last month, but the battle for the Old City, with its warrens of alleyways, was always expected to be tough.

Iraqi forces battled ISIS on Monday to push into Mosul's Old City where thousands of civilians remain trapped under terrorist rule. The city's historic centre is home to the Al-Nuri mosque, where ISIS leader Abu Bakr al-Baghdadi in July 2014 proclaimed an ISIS "caliphate" in terror-controlled territory in Iraq and neighbouring Syria.

The forces have recaptured several neighbourhoods from ISIS since starting the push for west Mosul last month, but the battle for the Old City, with its warrens of alleyways, was always expected to be tough.

Located on the west bank of the River Tigris which divides the city, the densely populated old centre is difficult for armoured vehicles to navigate and any use of heavy weapons there risks putting civilian lives in danger.

Iraqi forces on Monday aimed to press forward to enter the Old City from the Iron Bridge in an area rocked by heavy fighting the previous day, the commander of the Rapid Response Division's 2nd Brigade told AFP.

"The offensive has resumed in the same area as yesterday... which is made up of large buildings, markets and narrow streets where the enemy is hiding," Brigadier General Mahdi Abbas Abdullah said.

Several buildings have been retaken from the terrorists on the edge of the Old City in the past few days, Iraqi authorities have said.

But the fighting for ISIS's last major urban stronghold in Iraq puts civilians who remain in the Old City in "terrible danger", an aid coordinator for the United Nations has warned.

"People fleeing are telling us that it's very difficult to enter or leave the Old City," the UN's humanitarian coordinator in Iraq, Lise Grande, said in a statement on Sunday.

"Families are at risk of being shot if they leave and they are at risk if they stay," she said.

"It's horrible. Hundreds of thousands of civilians are trapped and they are in terrible danger."

Iraqi authorities launched the offensive to retake the city on October 17 last year, with the support of the US-led coalition that has been carrying out strikes against ISIS in Iraq and Syria since 2014.

Recapturing Iraq's second city would be a major blow to ISIS following months of terrorist losses in both countries.

Iraqi forces launched the drive to retake west Mosul on February 19, after seizing the city's eastern side the previous month.

About 111,000 have sought shelter in 17 nearby camps and reception centres while many others have stayed with relatives, the ministry of displacement and migration said.

The Iraqi government says it can accommodate a further 100,000 displaced people in camps, but the United Nations says the numbers could rise way beyond that.

"Humanitarian agencies are bracing for the possibility that an additional 300,000-320,000 civilians may flee in coming weeks," the UN's aid coordination agency OCHA said.

"But the truth is that the crisis is pushing all of us to our limits."

The aid operation for western Mosul is "far larger and far more complex" than in the east, she said.

"If the number of people leaving the city increases faster than we can construct new plots, the situation could deteriorate very quickly," she added.

Mosul had an estimated population of two million before ISIS overran it in a lightning June 2014 assault.

Also on Monday, a car bombing in a bustling business district in the west of the capital Baghdad killed at least 15 people, an interior ministry official said.

The attack was claimed in an online statement by ISIS, which gave a toll of 23 dead, the US-based SITE Intelligence Group reported.