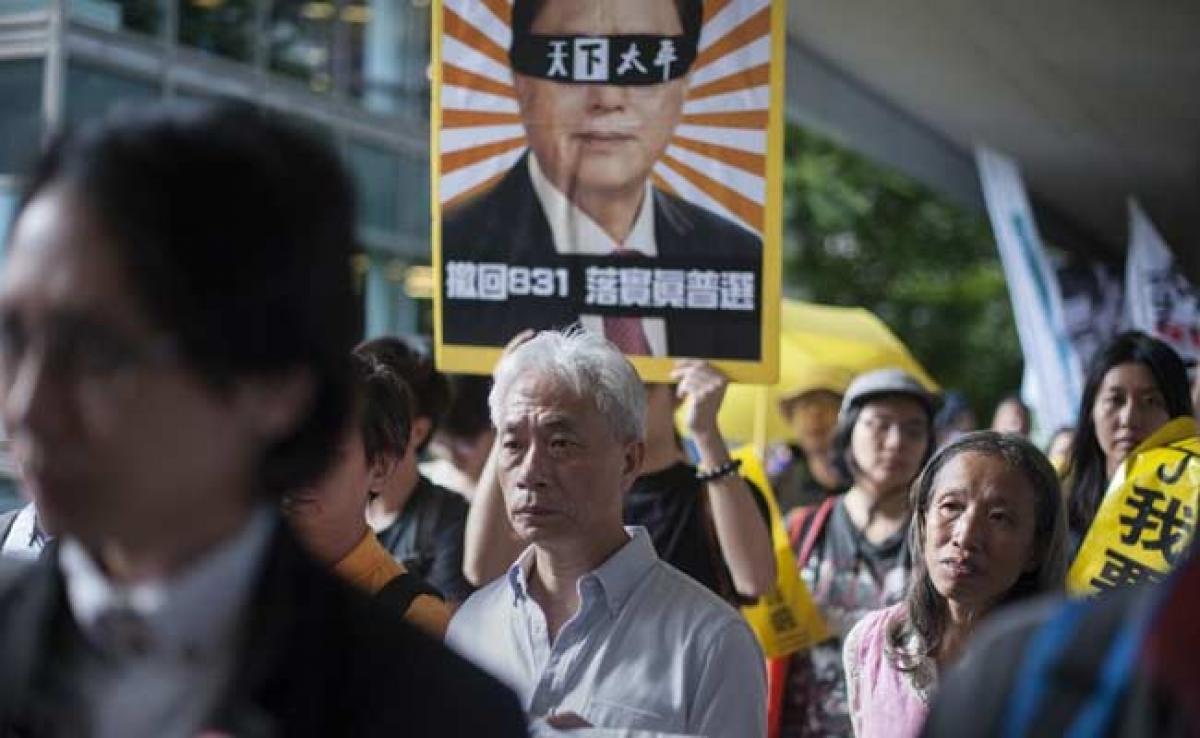 Pro-democracy activists and hundreds of supporters marched in Hong Kong Saturday ahead of a vote for the city\'s next leader which they reject as a sham.

Pro-democracy activists and hundreds of supporters marched in Hong Kong Saturday ahead of a vote for the city's next leader which they reject as a sham.

Hong Kong's next chief executive will be chosen by a pro-China committee on Sunday morning with former deputy leader Carrie Lam widely seen as Beijing's favourite for the job, but intensely disliked by the democracy camp who view her as a hardliner.

It is the first leadership vote in the semi-autonomous city since mass rallies in 2014 calling for fully free elections failed to win reform and comes as concern grows that Beijing is increasingly interfering in Hong Kong.

Some of the marchers on Saturday held yellow umbrellas, symbol of the democracy movement, and chanted "Oppose Chinese authorities' appointment - we should choose our own government!"

"It will be a nightmare for us if Carrie Lam is elected, but we will still continue to generate more motivation to fight against suppression and the interference of China's government," said student Wong, 20, who became the face of the 2014 "Umbrella Movement" protests.

The pro-democracy camp makes up only a quarter of the 1,194-strong election committee, which is drawn from a range of special interest groups, ranging from agriculture to real estate.

Most democrats on the committee have said they will support Lam's main rival John Tsang, a former finance minister seen as a more moderate establishment figure.

Tsang drew thousands of supporters to his final campaign rally in central Hong Kong Friday night, and is a clear favourite in most public opinion polls.

However, the vast majority of Hong Kong's 3.8 million voters do not participate in the selection of the chief executive and Lam is widely expected to win thanks to support from pro-China members of the election committee.

Democracy campaigners marching Saturday from the commercial area of Causeway Bay to a square near Sunday's voting venue said regardless of what people thought of the individual candidates, the system needed to change.

"I feel our power is still not strong enough to bargain with the Beijing government," said lawmaker Eddie Chu, but he added he still believed universal suffrage was Hong Kong's destiny.

The 2014 rallies left campaigners frustrated they could not force concessions from China and sparked a new wave of young activists calling for self-determination or full independence for Hong Kong.

However, it is not only the younger generation who are dissatisfied.

One 59-year-old protester who gave her name as Miss Lau said most Hong Kong residents want their own vote.

"We don't want the government to ignore us."