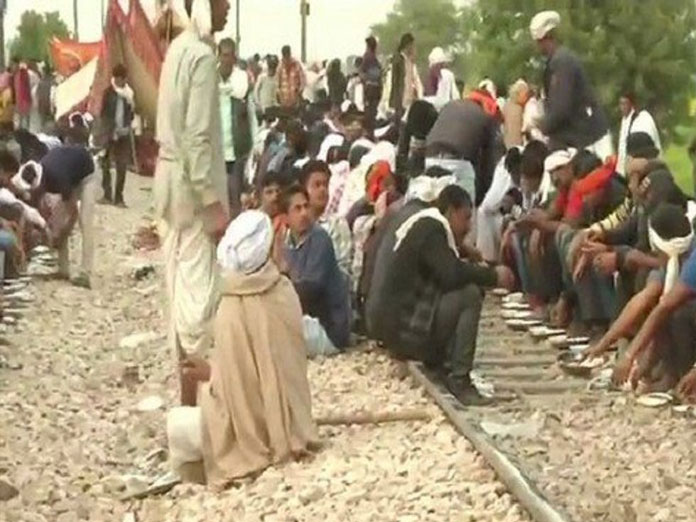 The people of the Gujjar community have squatted on rail tracks for the last five days, movement of trains has been adversely affected.

Sawai Madhopur: The district administration has curtailed internet services in the region as the Gujjar reservation stir entered the fifth day on Tuesday.

During the total internet shutdown, all types of data services have been restricted, as per an official statement from the district administration.

Since the people of the Gujjar community have squatted on rail tracks for the last five days, movement of trains has been adversely affected.

The Indian Railways said as many as 3 trains have been canceled and 2 trains diverted due to the ongoing protest.

The Railways had announced on Monday that 12 trains scheduled for plying in Kota division on February 12 stand canceled.

Also, the district administration issued a notice to Gujjar leader Kirori Singh Bainsla stating that agitators are violating the law and are in contempt of the Supreme Court order.

Bainsla had, on Monday, said: "We will leave only after getting 5 per cent reservation. It’s my personal request to the government, don’t do anything which can provoke people of Rajasthan, people are waiting for my instructions. Let’s sort it out in a peaceful manner. The earlier the better."

Last year on October 26, the BJP government led by then Chief Minister Vasundhara Raje had passed a Bill, which increased Other Backward Classes (OBCs) quota from 21 per cent to 26 per cent. In December 2018, the state government had also approved one per cent reservation for Gujjar and four other OBCs as per the Supreme Court-imposed 50 per cent quota ceiling.

The hidden mystery behind the success of Makeup artist: Amit...
We use cookies for analytics, advertising and to improve our site. You agree to our use of cookies by continuing to use our site. To know more, see our Cookie Policy and Cookie Settings.Ok