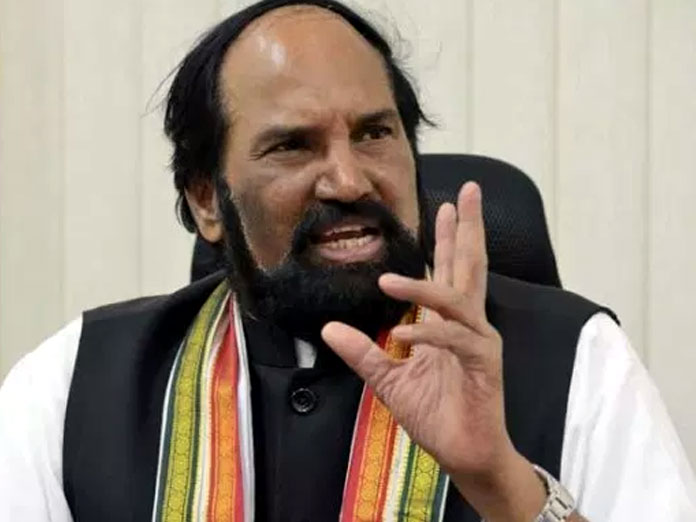 On the first day of brainstorm sessions, meeting was held with leaders of Adilabad, Peddapalli, Nizamabad, Zaheerabad, Karimnagar and Warangal Lok Sabha constituencies.

The meeting began with the Congress leaders paying deep condolences to the martyrs of Pulwama Terror Attack. Two-minute silence was observed in respect and honour of CRPF personnel who were killed in the attack on Jammu-Srinagar Highway on Thursday.

Initiating the discussion, Uttam Kumar Reddy said that the brainstorming sessions were being held to elicit the opinion of all important leaders on what should be the strategy of Congress party to win next elections. Further, he said all leaders from Mandal to Block level could give their opinion the candidates to their respective DCC Presidents. Further, he directed all DCC Presidents to give their opinion on candidates by Saturday evening.

Uttam Kumar Reddy said that the Congress workers should approach the people with total clarity on issues concerning the common man. He asked them to expose the failures of Prime Minister Narender Modi's Government on all fronts. He said people gave overwhelming majority to BJP in 2014 with high hopes that Modi would fulfill all the tall promises that he made. However, he said people did not get the promised Rs. 15 lakh each in their account. He said Modi Government also failed to bring back black money which he had claimed was stashed in foreign countries. BJP Government miserably failed in creating 2 crore jobs every year and the recommendation of Swaminathan Commission of giving Input Cost + 50% as MSP to farmers. Overall, he said there was not a single section of the society which benefitted from the Modi Government. "Just make people realise how they were cheated by Modi Government," he said.

The TPCC Chief said that the Lok Sabha elections would be completely different from Assembly elections. "While local issues get prominence in Assembly polls, people consider national issues while voting for Lok Sabha candidates. Therefore, all Congress workers and leaders must work hard to make Rahul Gandhi the next Prime Minister of India," he said.

Uttam Kumar Reddy said there was a sizeable population of minorities in many constituencies like Adilabad and Peddapalli. Therefore, he said Modi Government's communal agenda should be exposed appropriately. He said that the minorities never felt so insecure as they are feeling now under BJP regime. He said several unfortunate incidents have occurred across the country where people were killed just for what they eat, how they dress and to whom they get married. He said that Modi Govt even tried to interfere with the Muslim Personal Law. "Take these points to all minorities. While Modi is trying to divide the country on communal lines, Rahul Gandhi has made Congress party's stand clear that it would never interfere in the Personal Law of any community," he said.

The TPCC Chief said there were multiple factors like defective EVMs, wrong poll processes, biased attitude of Election Commission or deletion of voters which led to Congress party's defeat in last Assembly elections. "Admit defeat, but also show that world that the Congress party has a history of making a strong come back. The views and opinions of each and every Congress worker count. We must have a positive approach and ensure that all available resources and strengths are utilised to make Rahul Gandhi the next Prime Minister," he said.

R.C. Khuntia, in his speech, said that the brainstorming sessions were being held to facilitate direct interaction with all important leaders in a Parliamentary constituency. With an average of 10 leaders from each Assembly constituency, he said more than 70 leaders in a Parliamentary constituency were being involved in the process of selecting candidates and also formulating strategy for those constituencies. He issue necessary instructions to Congress leaders on how to win voters and get back those who voted for rebel candidates in last Assembly elections.

The Congress leaders from various constituencies gave several suggestions like having a better mechanism to monitor election campaign, a vigilant approach to check and prevent misuse of EVMs or violation of other poll processes and effective plan to ensure a wider reach among voters.