'Will not be rigid': HD Deve Gowda on seat-sharing with Congress 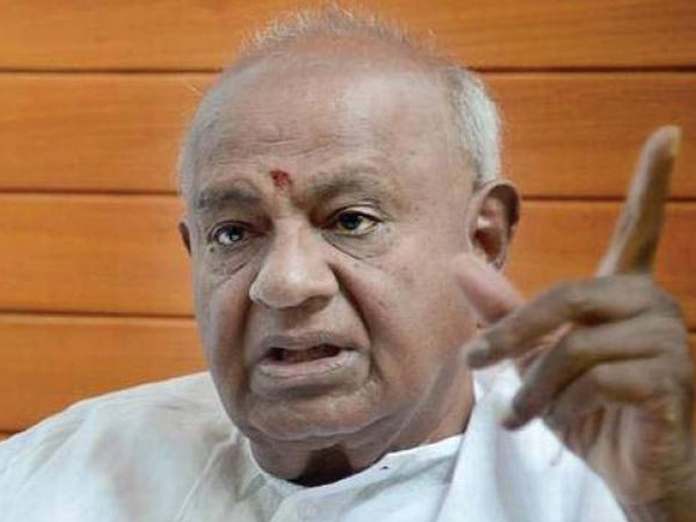 Indicating that he was agreeable to showing some flexibility in seatsharing talks for the coming Lok Sabha polls with ruling coalition partner Congress, JDS supremo HD Deve Gowda on Sunday said his party would not be rigid in its demand to contest from 12 of the total of 28 seats

Bengaluru: Indicating that he was agreeable to showing some flexibility in seat-sharing talks for the coming Lok Sabha polls with ruling coalition partner Congress, JD(S) supremo HD Deve Gowda on Sunday said his party would not be ''rigid'' in its demand to contest from 12 of the total of 28 seats.

Gowda said he had also asked the Congress to have a similar mentality during the seat-sharing discussions as there should not be any room for differences on seat-sharing between the parties, whose main aim was to halt the BJP's growth.

"I have said 12 seats should be given to us, but I will also not be rigid in saying that they should give us 12," the former Prime Minister said.

Speaking to reporters in Mangaluru, he said, "By loosening our stand a bit... a final decision should be arrived at. You (Congress) should also have that mentality, I have said. Finally we will come to a decision cordially."

Gowda said he was stating this to bring to an end all speculation and talk that differences may emerge within the coalition during discussions on seat-sharing.

The JD(S) leader said he would not be ''adamant'' in his demand for seats as the main focus was to halt the BJP's progress and nothing should cause a threat to the alliance.

Congress and JD(S) leaders are likely to discuss seat-sharing for the coming Lok Sabha polls at the coalition coordination committee meeting on Monday.

The coalition partners had held the first round of talks on seat sharing on February 25, during which Congress insisted that winnability would be the criteria, while the JD(S) maintained its stand to contest 12 seats.

As per their coalition agreement, both Congress and JD(S) have decided to fight the Lok Sabha polls together.

However, seat-sharing is likely to be a major test for both parties as the JD(S), which is banking on two-third, one-third formula adopted in ministry formation and allocation of boards and corporations, has demanded 12 seats out of the total of 28 seats.

Congress is opposed to this and has maintained that sharing of seats will be based on ''merit''.

According to party insiders, the grand old party is looking at limiting the JD(S) to six seats.

Also, there is pressure from within the Congress not to cede too many seats to JD(S), specially 10 seats where the party has sitting MPs.