There's a shade of red for every Indian woman: Sabyasachi 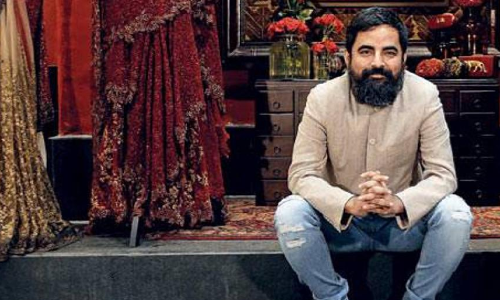 Mumbai: National Award-winning fashion designer Sabyasachi Mukherjee says red is one of the best suited and versatile colours for all Indian women.

"There is a shade of red for every Indian woman that goes from very bright red to very dark red depending on the complexion of the person. Indian complexion also has certain diversity.

"They can try a few shades of red on them standing in front of the mirror and depending on the yellow quotient of her skin, she can find the best suit for herself," Sabyasachi told here.

Meanwhile, the ace designer's brand - House of Sabyasachi - collaborated with the cosmetic brand L'Oreal Paris India to create a festive special make-up line that offers 10 different shades of lipsticks along with one mascara and eyeliner.

Talking about the correlation between Indian festivals and colours, Sabyasachi said: "When it comes to traditional Indian clothing, Indian lovers wear a lot of traditional colours in combination.

We wear a specific colour for a special festival and that is how colours and festivity are synonyms to each other."

Actress Aishwarya Rai Bachchan is the face of the brand. They worked together for the collection. Earlier also, they had collaborated for films like "Raavan", "Guzaarish" and made several public appearances, including the Cannes Film Festival red carpet.

He is one of the designers who is keeping the traditional fabrics like Khadi and methods like bandhani, gotawork, block printing and hand dyeing alive through his work.

Since he loves repeating the traditional designs and present them in a relevant manner to keep the stories of Indian fashion alive, don't such repetitions restrict him from experimenting?

He said: "Some people dress to present themselves as a different person every time, so they change their hair colour, clothing style etc. Some feel comfortable in whom they are and they want to preserve their identity.

When we look at Indira Gandhi, Frida Kahlo and Audrey Hepburn, I do not think in any degree these women were limiting themselves by sticking to a particular style. They just knew what works for them."

"I also believe that when someone is dressing for public image-building exercise, they should hold on to a particular look because people will identify with that. Some people dress to evolve and become the better version of them. But clothing is not just about expressing diversity, it is about also expressing individuality. And individuality cannot change every day."

Sabyasachi had his first film outing with Sanjay Leela Bhansali's "Black" and continued working with Rani Mukherji in films like "Baabul" and "Laaga Chunari Mein Daag", and also dressed some of the icons in films "Paa", "No One Killed Jessica" and "English Vinglish".

It is quite interesting to observe that the man who expresses his creativity in the utmost elaborate and dramatic manner in his design, always dresses up in monochrome.

"I enjoy minimalism and 'maximalism' at the same time. I enjoy a lot of Indian textile, antiquity, jewellery etc but in my personal style, I like simplicity.

I want to keep my personal wardrobe functional because I travel a lot. I keep wearing black and white so that I don't have to keep changing my wardrobe all the time," Sabyasachi said.

"Also I like classics, so if something looks good on me, I am happy to wear it every day of my life," he added.