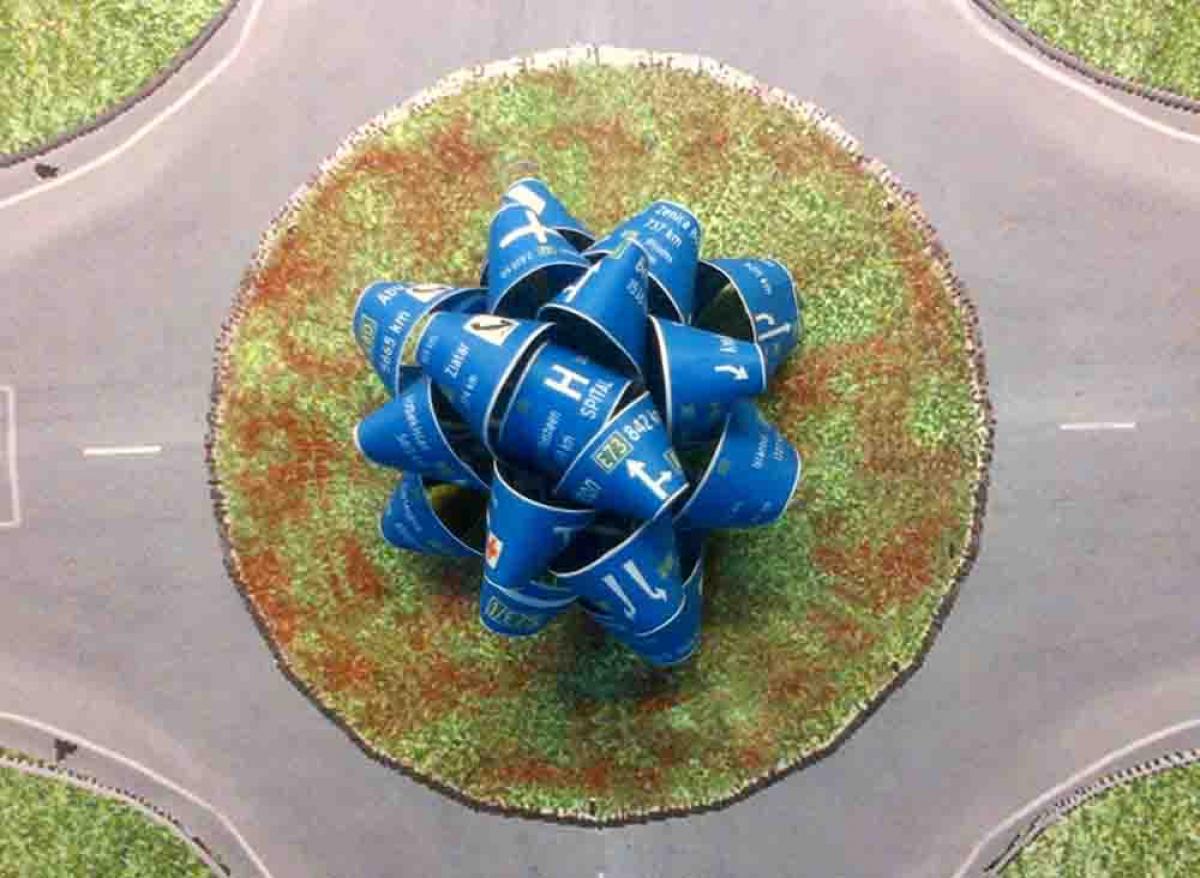 The project was conceived in 2012, when the regional consortium of ten municipalities ‘10 vor Wien’, (‘10 near Vienna’) together with the Advisory Council of Public Art Lower Austria, launched an initiative for large-scale public artworks to be installed on three selected roundabouts in Lower Austria, to promote the independent development of the region. Kallat was one of three artists invited and chose the site at Stockerau, 20km north of Vienna, where the roundabout acts as a nodal point on the expressway and a gateway to several towns.
Here After Here After Here is rendered in a ‘traffic blue’ shade, layered with information set in the ‘TERN’ (Trans European Road Network) font and could appear like a mammoth loop of infinitely stretched traffic signage. Kallat draws together a confluence of myriad references to arrive at this compelling form, amongst them the mythic symbol of ouroboros, ancient eternal knots, alchemical diagrams and sacred geometry.
The text and symbols on this unending highway signage connect Stockerau to places all over the world ranging from Singapore to Salvador, Marrakesh, Mumbai, Beijing, Brasilia, Bucharest to New York, Paris and Taipei, among others.
The text bears actual distances and exit signs, that you might follow from Stockerau to reach any of these places. As if by a whimsical flight of the imagination, Kallat maps the circular form of the roundabout located in Lower Austria onto the spheroid form of the globe, symbolically and somewhat playfully connecting this location to the rest of the world.
Jitish Kallat commented, “Somehow more than revisiting the many photographs and videos I made at the roundabout while I was there, I was drawn to repeatedly view the site via Google Earth, as if to make sense of the place from above and afar.
While making this virtual expedition a cascade of interrelations unfolded between the circular form of the roundabout and the spheroid of the globe, the form of the highway signage and the endless loop.
It felt as if the whole artwork had developed a self-organising principle from the convergence of these diverse ideas.”
Show Full Article
Email ArticlePrint Article
More On
Download The Hans India Android App or iOS App for the Latest update on your phone.
Subscribe
Subscribed Failed...
Subscribed Successfully...